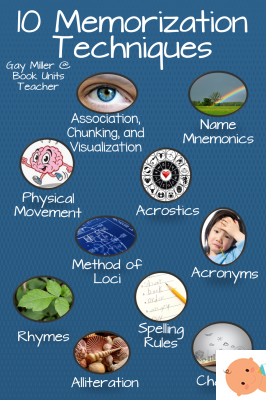 "It is only a question of method". Thus begins our lesson with Matteo Salvo, International Master of Memory and Guinness World Record at the World Memory Championships in London 2022. A real Memory Man.

Because "every person has a champion brain, you just need to train it with the right method", he explains. "Memory techniques are scientific methods designed to store any type of information and fix it in our long-term memory, enhancing learning capacity".

So yes, learning is for everyone. Also store. You just need to know how to do it, thanks to a few tricks and the right memory technique.


In fact, there are "shortcuts" that can be easily explained to your children and make everything a game: for example, you can use mind maps to remember complex concepts and information, Ciceronian loci to remember lists but also speeches, creative images to remember words, names or numbers.

How memory works: the basics


Memory techniques are scientific methods designed to store information of any kind. There are many and they have evolved over time and for each type of information there is in practice a technique.
To begin with, you need to know that our memory works by associations of images, so the information you want to store will be transformed like this.
A quick example for memorizing a simple word is imagine it vividly with the five senses: for example let's try the word "tree". You don't have to repeat the parrot word to remember it, until it gets into your head. Just activate the five senses (imagine smelling it, approaching it and caressing it ... etc).
In addition to images, sounds, ideas or concepts can also be associated.

1 - Remembering speeches or lists thanks to the Ciceronian loci

This technique comes from Marco Tullio Cicerone, known for his oratory art, and is used to memorize lists of information (but also speeches) using visual memory. Without slips or notes! The more complex and abstract words are divided into concrete images, which are then associated in the order in which they appear.

It is necessary take a series of familiar points of a path known to us and associate these points with the key passages of a speech (or a list of things you want to remember). When you mentally retrace the path, the key points of what you want to say also come to mind.

"In this way we remember a precise lineup of the topics that we want to expose", explains Matteo Salvo. "And this technique has also left its mark on our way of speaking. Do you have in mind when we say 'in the first place', 'in the second place' and so on? We owe these idioms to the transcriptions of Cicero's prayers" comments the sample of memory.

Let's try to better understand how it works with an example: in our speech there is a dog, a film and a school trip.

Just put at the beginning of our path (under the gate of the house) the image of our dog running after us, in the second point (the bus stop we take every day) the television that broadcasts our favorite film supported on a bench and at the third (the school entrance) a bus with the engine running and ready to go.

When to use them? They are used to store a list of information with the same importance. The passages of a speech, the shopping list (so you can get your children to help you remember it by making it a challenge), but also a deck of cards. Better not to use it instead to study concepts, because in this way the various hierarchies between information are lost.

They are a variant of the loci, but we are in this case in a closed environment. Try making your child imagine a path in your home. Walk through it room by room, identifying stages. The key concepts of the discourse must be associated with these stages.

But be careful not to get them too close and follow an order without ever going back: you risk getting confused.

Memorizing is not boring, quite the contrary! To remember something, you can play with your child and ignite your imagination like never before. Just associate an image that has these three characteristics: the more out of the ordinary, the easier the concept later will be to evoke.

Paradox: for example if I have to memorize a coffee bean I can imagine it as big as a watermelon, or to remember a small whale I can visualize it as a red fish overflowing in the bowl of the house. "The more the associations are bizarre, strange or funny, the more we involve the emotional memory and consequently also the long-term one" explains Matteo Salvo.

Action: do not imagine static situations, but dynamic: therefore, returning to the little whale, there will be miniature hunters in our aquarium that will try to catch it.

Vivid: involving the five senses in a clear way.

Did you hear what that whale smells like? And why is it fuchsia?

Another example: to remember the words avalanche and foot, imagine a giant avalanche coming towards you, towards your immense foot. Fortunately it only reaches up to the fingers ...! You are safe!

3 - We remember numbers thanks to shapes and sounds

We've seen what to do with words, let's try numbers now. A phone number, a formula, a pin, a sequence, a house number: how to put it in your head?

As Matteo Salvo explains, "there are different techniques to do it: the rhyme system, the shape system".

An image that rhymes (or assonance) is associated with each number:

To remember pin 4960 just imagine a cat with arrives on Jupiter and meets a she who eats a pear fallen from a pear tree.

There is also another technique: a form that can be associated with it is connected to the number.

So to remember 4960 it will be enough to imagine a chair with a balloon and a cherry on it falling together inside a barrel.

There is also another technique although it is the least common. It takes longer to learn, but it gives you great results.

With this system a certain type of sound is associated with each number and was popularized by the philosopher Leibnitz.

Now you can suggest to your child to memorize these associations well, perhaps with the help of pictures (as we have seen before).

Once they have been made their own, they move on to conversion.

The sequence 82022 becomes, by adding vowels:

Doubles do not count in this exercise. 11 could also be DiTTa not only DiTa. And it's always 11 and not 111. Because 111 would be DeTTaTo or DiTaTa. With the vowels in the middle to separate the consonants.

What if the words seem similar to you?

They use creativity, imagination, images and colors to bring concepts into the head. In practice, complex information is translated into images that can be easily viewed and memorized.

How do they work?

It starts from a basic concept, which is depicted in the center of the sheet and then different branches develop, which represent the secondary information that is associated with keywords. This secondary information is not only written as words, but some will be drawn with images (to better remember them) and we will also choose the colors to give to the various branches.

Images don't have to represent the concept in question, they can also just help revoke it.


Matteo Salvo's final advice to all the boys? "Study with a view to explaining the lesson to your friend or companion".
Imagine having to transfer what you have just learned to a friend who knows nothing about the subject. It will be very useful, both because he will force you to be clear and precise, and because you cannot take anything for granted.

Who is Matteo Salvo

Born in 1976, Matteo Salvo graduated in Mechanical Engineering from the University of Genoa. Since 2000 he has been teaching memory techniques and study methodologies. In 2022 he was the first Del Paeseno in the world to achieve the title of International Master of Memory at the World Memory Championships and in the same year he entered the Guinness Book of World Records for having memorized a deck of 52 playing cards in apnea. Among his books, Student Profession 30 and praise, Studying is a breeze, Turbo-charge your mind with Mind Maps and Train your mind in 5 minutes.

TAG:
School: the Liceo for the Ecological and Digital Transition arrives ❯

add a comment of School: 4 memorization techniques to remember words, numbers and concepts