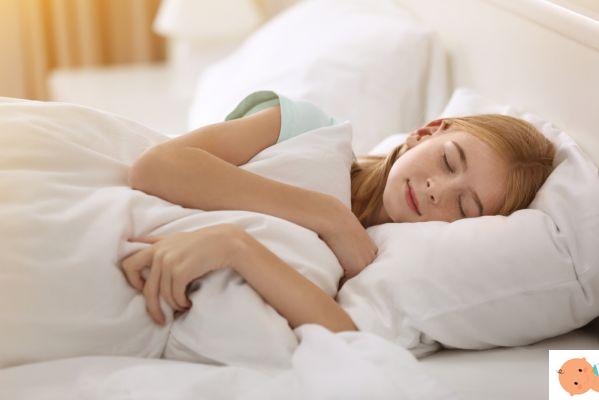 Sleeping is good for you. And the lack of sleep in adolescents would contribute to the onset of various problems such as obesity, diabetes, anxiety and even behavioral discomfort. In addition to lowering school performance and causing more road accidents. This is what the pediatricians of the AAP, "American Academy of Pediatrics" declare. They also found that American kids don't get enough sleep.

The solution therefore seems obvious: to send the boys to bed earlier in the evening. But it's not always that easy. The problem, according to the AAP, is physiological: the changes that occur in the body during adolescence also change the rhythms of fatigue.


Young people in this period of their life are prone to go to bed later because their physique requires it, and consequently they wake up later in the morning. In fact, teenagers tend not to fall asleep before 23pm. Pulling them out of bed by force means depriving them of the necessary rest.

The solution of the pediatricians of the AAP? Postpone lessons.


If teens could go to class from 8:30 onwards (in some American schools the entrance bell rings at 7.30, if not earlier), they would have fewer health problems and better moods. And their academic performance would also gain from it. From the tests and exams taken, it appears that children who sleep more get better results.

According to a recent survey by the National Sleep Foundation, a US non-profit organization that deals with sleep issues, 59% of American middle school students and 87% of high school students sleep much less than 8,5 - 9,5 hours. sleep recommended by doctors. And afternoon naps, coffee and weekends are not enough and do not replace a good and healthy sleep.

10 healthy and quick breakfasts before going to school

What is the ideal breakfast for a schoolchild? MyModernParents.com offers 10 all complete and well calibrated. The choice is yours, bearing in mind that sometimes mixing and changing ...

According to Istat reports, in a research published at the end of 2022, over the last twenty years there have been major changes in the organization of student life times.

On an average day of the week, less time is spent on activities such as sleeping, eating and personal care (16 minutes less per day). In particular, sleep was affected, with 11 minutes less a day.

From the forum: teenage children

TAG:
High schools: 7 tips to make it easier for kids to study (and get better grades) ❯

add a comment of School, because teenagers need to sleep more