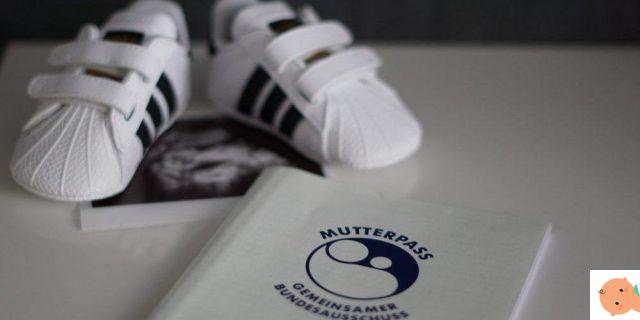 If the first is the one that goes virtually unnoticed, the second month of pregnancy already has a different importance. If she still does not know she is pregnant, it is in this period that she makes this sweet discovery. But not only. It is the time of the first visit and the first ultrasound. And very often you can already hear the little heart beating. In short, endless emotions. The other side of the coin? Symptoms of pregnancy could get really annoying. But for the sake of our children, you can put up with anything.

Second month: how many weeks it corresponds to

It is now quite clear: the great adventure begins on the first day of the last menstruation. And pregnancy is counted by following the weeks.

The delay of menstruation is now practically certain, even in the case of irregular menstrual cycles. The implantation took place, with or without losses, and the beta Hcg hormone is already fully circulating. The home test is positive, but the gynecologist will most likely also want to prescribe the blood test to be absolutely sure.

From this point of view, gynecologists are divided into two broad categories. There are those who do not even require a blood test to evaluate beta Hcg. Or at most they do it only once to be sure that there is actually a pregnancy. And it all ends there.

Those of the second school of thought instead have the blood sampling repeated to evaluate the trend. In the early days, the beta Hcg double every two days, subsequently they grow in a more "soft" way and then settle at a stable level. Some gynecologists therefore want to check the growth of the hormone to make sure everything is ok. A slowdown in the growth of beta Hcg could be a sign of something wrong.

Second month of pregnancy: what happens to the mother

Gradually the body begins to change to adapt to the new condition. It is still clearly very early for the belly to start growing, but there may be some swelling. The uterus enlarges to make room for the baby. The embryo is still small, but everything is slowly setting in motion for the weeks to come. For example, the blood volume will increase significantly to meet all the needs of the mother and baby.

Second month of pregnancy: what happens to the baby

In the first few weeks, the development of the embryo is very fast. The size is small, but the cells multiply very quickly. The shape is that of a tadpole. The organs begin to form soon and there are already sketches of what will be arms and legs. Between the sixth and seventh week the heartbeat can be perceived very well. It is much faster than that of an adult and can go as high as 150 beats per minute.

Symptoms of the second month of pregnancy

The beta hormone Hcg is responsible for nausea and, when there is, for vomiting. They are more insistent throughout the first quarter because in this period the concentration of beta Hcg is higher. During the second month, therefore, the symptom could be felt a lot, even if it could be more pronounced during the third, and then improve (even if there are some exceptions).

The sensitivity to odors is now stronger and tastes change a bit at the table. People typically try to eat what relieves nausea. Every future mother tries any remedy to feel better: dry foods, salty foods, mint, ginger, Coca-Cola, lemon and so on and so forth.

Even fatigue is no joke and the mood can be fluctuating. As the uterus grows you will feel the urge to urinate much more often. And above all it becomes very difficult to hold back. Another typical symptom of the second month of pregnancy is breast enlargement. You could get one size up in no time! It is important to support it correctly, so among the first purchases a comfortable bra with wide straps should be expected to give maximum comfort.

The hormones in circulation could also have repercussions on intestinal function. There are two alternatives: either stubborn constipation or unpleasant diarrhea. Obviously, in both cases, you have to manage your diet well.

Transparent losses are completely normal. Instead, the gynecologist must be alerted if they change color, if they are blood, if there are other symptoms (itching, burning, bad smell), if you experience menstrual pain.

If you are among the mothers kissed by luck you may not have the slightest symptom. The dream of every expectant mother. And don't worry.

Second month: things to do

First of all, if you don't have one yet, you need to choose your trusted gynecologist, who will guide you throughout your pregnancy. The decision can be influenced by various factors: public or private sector, clinic or hospital, woman or man, are some criteria that will guide you.

One of the first things he will prescribe are some very important blood tests. In addition to a normal blood count, the Rh factor and the blood group, for example, you will have to know if you have already had rubella, a seemingly trivial disease that becomes dangerous with the belly. You will do the so-called Rubeo test. Another fundamental exam is the Toxo test which serves to understand if the expectant mother is immune to toxoplasmosis or not. Some basic rules depend on the outcome, such as the ban on eating raw meat. There are several first trimester exams, but many are unpaid.

Even if you are "only" in the second month of pregnancy, nutrition must be taken care of carefully. The quality of what you bring to the table is fundamental. In the choice of fruit and vegetables, for example, preference must be given to the products of the current season, which are certainly more genuine. Or compared to fatty meats and cheeses, lean ones are better. And also pay attention to cooking: they must be simple. Try to start off on the right foot and keep your weight under control right away.

Never forget folic acid. It should not be abandoned throughout the first trimester, but it is generally recommended to take it throughout pregnancy and often also during breastfeeding.

The first visit with the gynecologist

This is the time of the first visit with the gynecologist. Usually you avoid doing it too early because the risk is that the pregnancy is so early that you don't see anything, creating a lot of anxiety. That is why it typically settles at at least 7 weeks.

The first visit consists of two parts. In the first there is a detailed interview with the doctor, who will ask a series of questions about his own history, both clinical (even family to see if there is any particular pathology, for example Down syndrome or diabetes) and personal, that is, about one's lifestyle, activities, and so on. You will be asked for the date of your last menstruation in order to calculate the expected date of delivery. You will also be weighed. Everything will be written in a sort of medical record that will report all the details of the pregnancy.

The second part of the visit instead consists of the ultrasound.

Here is the most awaited moment since the positive test in hand: the ultrasound, the first meeting with the baby! The first ultrasound is used to date the pregnancy well. Based on some standard measurements, the gynecologist (or sonographer) will be able to tell if the embryo is actually the right size for its gestational period or if it is smaller or larger.

The first ultrasound also has the important function of assessing the site where the pregnancy is implanted, the number of fetuses, the possible presence of placental abruptions. It should not be done too early because you may not see anything or in any case only the gestational chamber and the yolk sac. At 4 weeks the embryo is still not there.

Last but not least, the ultrasound is used to hear the fetal heartbeat. And, even in this case if done too early, this may not happen, triggering many fears. Better to wait a little longer and be sure.

How is it done? This is a transavaginal ultrasound. That is, the probe is inserted directly into the vagina. The first ultrasounds will all be like this.

The fifth week of pregnancy

Generally, the fifth week of pregnancy is the one in which the symptoms appear most clearly. If before they were very nuanced, now they make themselves felt good. Especially responsible for the beta hormone Hcg.

The sixth week of pregnancy

In the sixth week of pregnancy, the small embryo measures 4-6 millimeters. And it already moves a lot in the belly. It's just that it has a lot of space, so you can't realize it.

The seventh week of pregnancy

During the week of pregnancy, nausea may get worse. Never take medicines on your own: even if they are specific for pregnant women, it is always better to ask your doctor for advice.

The eighth week of pregnancy

As early as the eighth week of pregnancy, you can begin to think about undergoing CVS. It is a technique used to diagnose some important genetic diseases. Talk to your gynecologist.

add a comment of Second month of pregnancy: all the information