Second quarter: 9 reasons why they are considered the best months 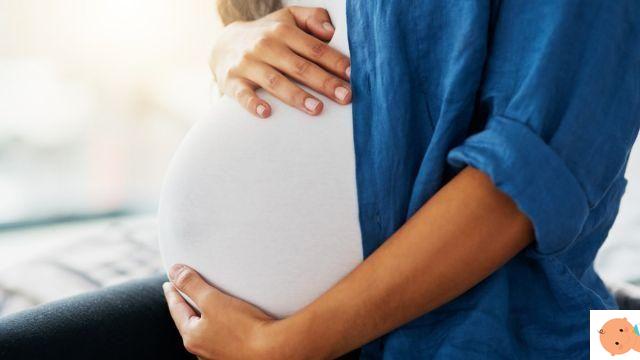 Each pregnancy is different and each woman experiences the months of waiting in her own way, but it is said that in the second trimester the future mother enjoys a period of general well-being. Why does this happen?

"There are not many objective reasons why the second trimester is the best one of pregnancy: wanting to give an answer that gives a good idea, we can say that the central months are the ones of greatest well-being because there are no more typical ailments and fears. of the first trimester, such as nausea or the fear of abortion, and there are still no third trimester ones, such as the weight of the belly or the fear of childbirth "said Lanzone, director of the delivery room of the Gemelli Polyclinic and director of the Institute of gynecology and obstetrics of the Catholic University of the city.


1. In the second trimester, the body and mind have adapted to pregnancy
As soon as you discover that you are pregnant you are immersed in a whirlwind of novelty and at first it is not always easy to adapt: ​​"The hormonal balances change, new hormones come into circulation but above all, from the day of the test, something changes in the woman's mind. , who, even if pregnancy has been sought and desired, suddenly finds herself faced with the reality that she is about to become a mother ”says the gynecologist. “These are modifications that at first can upset; then, little by little, body and mind adapt to the new situation and here, after the first few weeks, you feel better ”.

2. Hormones that give well-being enter the circulation
In the second trimester the hormones that mark the start of pregnancy decrease, that is the Beta HCG, which often - perhaps unjustly - are pointed out as the cause of nausea and fatigue; on the other hand, there is an increase in the secretion of other hormones that give well-being, such as endorphins, which raise the threshold of pain and discomfort and create a sort of halo of alienation from the world around the pregnant woman: not for nothing the future mother he often has a dreamy look, typical of those who have their heads elsewhere.


3. The nausea passes
Speaking of nausea, most women who suffered from it in early pregnancy, once they enter the second trimester, see them magically disappear. To be sure, the reason why nausea appears early in the pregnancy and goes away at some point is not entirely clear. If once traced back exclusively to hormonal causes, more and more studies claim a psychosomatic origin: "Excessive nausea, which sometimes lead to hyperemesis, that is, vomiting episodes, would in fact represent a form of somatization of anxiety, linked to internal conflicts , especially if it is an unwanted and unwelcome pregnancy, ”comments Lanzone. "In the majority of cases, after the first few months the woman gradually accepts her condition and, by the time she reaches the second trimester, the nausea passes".

4. Fatigue subsides
In the same way, in the second trimester the feelings of tiredness and sleepiness that accuse many pregnant women in the first weeks and which once again seem to be a manifestation of the adaptation of the maternal physique to pregnancy, generally diminish. In addition, blood pressure, which in the early stages is lowered and causes weakness, tends to regularize in the second quarter.

5. In the second trimester the fear of an abortion is “released”
In the first months of waiting, all future mothers, more or less secretly, have within themselves the fear of suffering a miscarriage. "A fear supported by statistical data, given that abortion is an event that affects 15% of pregnancies and that in 90% of cases occurs within the first 12 weeks", emphasizes prof. Lanzone. It is therefore easy to understand why, once this deadline is passed, the expectant mother feels a great relief and really begins to enjoy the feeling of carrying a baby!


6. You see yourself more beautiful...
Even from an aesthetic point of view, things are fine: you see yourself more beautiful because the skin appears brighter, hydrated and a more rosy complexion, thanks to the increase in female hormones that reduce the production of sebum, increase blood circulation and surface water retention.
The body also appears in better shape: the belly is hardly noticeable and all in all we like the idea that the baby is finally beginning to 'see each other', and we especially like that the mammary glands are preparing for breastfeeding and are increasing in volume, giving us a more florid décolleté.

7. … E sexy!
In the second trimester, once the fears of an abortion that can curb the libido have passed, there is usually a flashback with the partner, one feels more free to let oneself go to sex, without being inhibited by those curves too much, than one sometimes they are not attributable to our greed! And without being held back by the fear of getting pregnant, because we already are!

8. In the second quarter there are still no disturbances of the last months
In the second trimester, the belly is not yet very heavy and bulky and there are still a number of related ailments, such as shortness of breath, back pain, swollen legs, insomnia, digestive difficulties, which often do not make you look forward to freeing yourself from the sweet burden!

9. And childbirth is not yet thought of
When the third trimester begins, a new phase will begin, characterized by the last checkups, the birth preparation course ... and an increasingly voluminous belly, which gives us an ever clearer idea of ​​the baby's presence. And here new anxieties can arise, first of all the fear of childbirth with its related fears: I will be able to give birth, the baby will be healthy, what is the best delivery method for me, I will know the right contractions, I will be a good mother and so on. But in the second quarter all these thoughts still seem far away!

It is not always true that the middle ones are the best months.
If the majority of women in the second trimester experience greater well-being, the rule does not apply to everyone: "There are those who continue to feel tired and suffer from nausea throughout their pregnancy, those who live all nine months with apprehension, especially if already has risk factors or if you are of an age which in itself exposes you to greater risks. Also because it is in the second trimester that the morphological ultrasound and other prenatal diagnostic tests are done, which can highlight alterations in fetal development; and it is in this period that typical pregnancy pathologies can arise, such as gestational diabetes or preeclampsia ”says the gynecologist.
But there are also women who live well all nine months: perhaps because they are lucky enough not to encounter 'hitches' along the way, but perhaps also because they have decided to live one of the most unforgettable moments of their life with joy and lightness!

Read all the special wellness in pregnancy:

add a comment of Second quarter: 9 reasons why they are considered the best months