Secondamento: what it is and how it happens 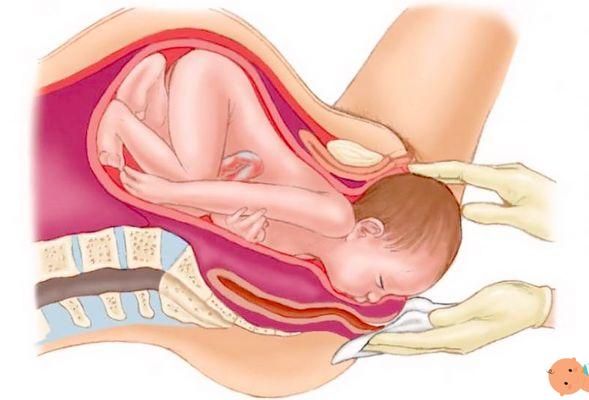 After giving birth, the only deso of the new mother is to go back to her room with the baby in her arms and finally be in peace with her new family. And instead we need to be patient a little longer, because after the birth there is a second time, not called by chance afterbirth, during which the placenta and other fetal appendages, such as the membranes that make up the amniotic sac and amniotic fluid, are expelled or extracted from the uterus.

Read also: How to cope with 40 days after giving birth

How the afterbirth occurs

"In the vast majority of cases, the expulsion of the placenta and fetal adnexa occurs spontaneously within half an hour of giving birth, thanks to light and physiological uterine contractions that easily 'slide away' everything that is left in the uterus "explains Monica Vitali, obstetrician specialist in pelvic floor dysfunctions and rehabilitation." The placenta is in fact attached to the uterus thanks to veins and special arteries, called cotiledoni, which have the function of allowing, during the nine months, the passage of nourishment and oxygen from the mother to the fetus.

Once the baby is born, the placenta stops its function, so the cotyledons detach from the uterus, thanks to less intense contractions than those used during labor and delivery.
To facilitate this detachment, the guidelines for the prevention of maternal haemorrhage provide for the possibility of administering, immediately after the birth of the child, a small amount of intramuscular oxytocin".

If the placenta does not detach on its own

Sometimes it can happen that the contractions stop after delivery or that the placenta has 'attack' anomalies in the uterus and for this reason does not come off, creating what is termed 'placental retention'. What do you do in this case?

"Within an hour of giving birth, small and delicate pressures can be performed on the mother's belly, to stimulate the uterus to contract and to help release the remains of the placenta and membranes, at the same time exerting a slight traction of the umbilical cord towards the outside "replies the midwife.

"If an hour after delivery the placenta has not yet been expelled or if there is an onset of hemorrhage, manual afterbirth is first used still in the delivery room: that is, the gynecologist carries out an internal visit and tries to detach the placenta from the uterus manually.

"If the afterbirth is not completed even with manual help, the woman must be moved in operating room, where, under general anesthesia, an operative, instrumental afterbirth will be performed, lasting a few minutes. It is an event that scares new mothers a little, in reality it is the safest and least traumatic method to allow rapid delivery with a lower risk of bleeding ".

Control of the placenta

It is important that the afterbirth take place completely, with no residue left, which could give rise to infections: "For this reason, once the placenta has been removed, the midwife will check that all the cotyledons that made it up are present and that the membranes that enveloped the baby are also complete, continues Monica Vitali;" in case of doubt , an ultrasound is performed and, if any material is retained, the uterus is cleaned. "

In some states, such as in America, the stage of detachment and delivery of the placenta is called the third stage, since the first stage is labor and the second is the period. expulsive.

Read also: What is the placenta

Is the afterbirth painful?

"No, it is not painful as there are no intense contractions like those in the phase of labor and delivery, moreover the placenta that is expelled is like a soft cake that comes out easily" replies Monica Vitali. "And then at the end of the birth you are so adrenaline-pumped that you no longer feel any pain. Especially if you have the baby in your arms!"

Does the afterbirth cause bleeding?

The afterbirth does not cause bleeding, on the contrary, precisely to favor the detachment of the placenta, the uterus is contracted and thanks to this the leakage of blood from the blood vessels is stopped.

add a comment of Secondamento: what it is and how it happens