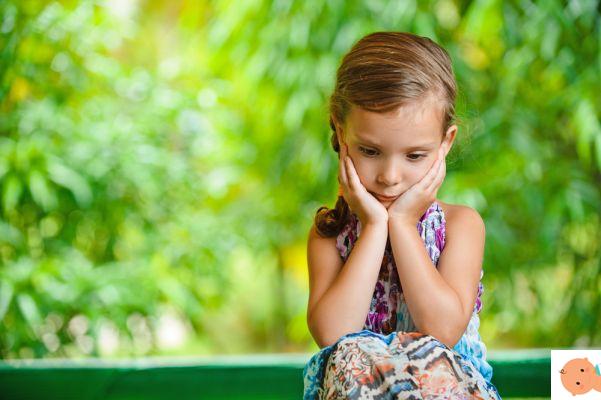 "She is a 4 year old girl who enjoys talking to her dolls ... but who cannot say a word when she is out of the house".

"He's an adorable 6-year-old boy, full of life, running and playing noisily in his garden ... but freezing and numb as soon as he enters the classroom"

She is an 11-year-old girl who sings and writes wonderful songs at her home ... but who can't say a single word to her teachers or her classmates.

(taken from The challenge of Riccardo, A story to explain selective mutism to children - Valérie Marschall)

1) What is selective mutism?

Selective mutism is the condition in which the child in particular situations or with certain people stops talking. It is not the consequence of a problem of intellectual development nor does it depend on a hearing deficit or any other organic disease. It can appear around 3-4 years of age, but also later, around 10-12 years. The main characteristics for identifying selective mutism are explained to mymodernparents.com by Leonardo Zoccante, child neuropsychiatrist of the Integrated University Hospital of Verona.

More frequently the speech block is towards strangers (for example, kindergarten teachers or teachers) but it can happen that it occurs with parents and not, for example, with grandparents or peers. Under favorable conditions, that is, evidently devoid of anxiety-inducing components, the child speaks in a completely normal way, using a fluid and appropriate language.

3) These are usually introverted and hypersensitive children

In the majority of cases, selective mutism is found in introverted children, shy, hypersensitive, who prefer solitude to the company of peers. In other words, they are children by nature shy and taciturn, for whom stopping talking is equivalent to erecting a protective barrier against the outside world.

4) The causes of selective mutism

The causes are to be found first of all in the child's temperament and in his tendency to feel embarrassed in front of people who, for whatever reason, do not make him feel at ease. It is also hypothesized that selective mutism does not depend on the inability to speak in certain situations, but rather on the desire to avoid occasions that arouse discomfort. That is, that it is a kind of weapon used for defensive purposes. You may be interested in the article on Yoga for children

5) How is the diagnosis of selective mutism made

To diagnose selective mutism, it should be noted that the child does not communicate verbally only in certain precise circumstances, while in others he uses words in a completely normal way. Furthermore, autism spectrum disorders, mental retardation, or specific language problems, such as stuttering, should not be associated with the phenomenon.

Selective mutism is transitory due to its precise characteristic, that is, destined to resolve spontaneously with the passage of time. It is very rare that once it has disappeared it will reappear after some time. The fact remains that children who have manifested it tend to maintain character traits of confidentiality, shyness or closure (even if not pathological) towards the outside world.

7) The cure: patience, understanding and tolerance

In the specialist field it is believed that it is not appropriate to exert too much pressure on the child so that he can unblock and start talking again in situations that prompt him to be silent instead. Patience, understanding and tolerance are the strategies that can be most fruitful in terms of quickly solving the problem.

The book tells the story of Riccardo, a child who turns to children and describes himself, his emotions, his fears, his joy, his silence of which he is perfectly aware and his challenge to overcome his fears, his victory. She writes the author: “It is necessary to consider selective mutism not as a refusal to speak but as an inability to speak in some situations. The child is not silent because he does not want to speak, he is silent because he cannot, he cannot. Reading this book, the reader will find important and easily actionable advice. The second part of the book, on the other hand, is aimed at parents, teachers and therapists.

"Selective mutism is a very common but little known anxiety disorder, and this book is probably the first to deal with it in a simple and joyful way. A book also suitable for all shy children, who simply get stuck in front of those they don't know. or in the school context, "says Daniela Conti, editor of the book.

8) What to do if it does not affect the quality of life? Accept the child as he is

The basic idea is that when selective mutism does not significantly interfere with the quality of life of the child it is right to judge him with serenity, just as the introverted temperament of the child and his heated sensitivity must be accepted without reserve. That is, a child with selective mutism must be respected and not forced to behave differently from what his nature prompts him to do.

9) What to do if there is psychological distress? Ask for the intervention of a specialist

Only if the episodes of dumbness negatively affect the child, for example by exposing him to the derision of his friends (a possible possibility in elementary school, very rarely before), or if it is assumed that the problem is a consequence of a strong psychological discomfort, it may be appropriate to request the intervention of a specialist. The family pediatrician can express his opinion in this regard.

10) The child suffering from selective mutism should not be reprimanded

In general, the child with selective mutism should never be reproached for his silence, while it is more than advisable to show him that you are happy to hear him speak and listen to him with pleasure and attention.

In summary, we must focus on rewards, praise and gratifications, avoiding any punitive or constricting intervention. Such an attitude expresses a respect for the nature of the child which can have a favorable impact on his way of dealing with critical situations, leading him to abandon the strategy of being silent.

FROM THE FORUM: SELECTIVE MUTISM OR PERFORMANCE ANXIETY?

Hi, I'm the mother of a 6 and a half year old boy who is in first grade. My son from a very young age has always been extremely shy, both with adults and with children, especially if they are strangers. He started kindergarten just before he was three, and he fit in pretty well. After two years we moved, so he started the last year of kindergarten in a different school. Let's say that the problems started from that moment. He became very closed, he refused to talk to the teachers and isolated himself, he only made friends with a child. His teacher had pointed this out to me, and she advised me to be very close to him. Over time, however, he managed to open up a little, and he began to communicate with the teacher as well. He started primary school in September, with the same classmates as the kindergarten, but with new teachers. With the children everything was ok, he already knew them, but he had the same closure problem with the new teachers. Besides, he not only refused to talk to them (but he always managed to express himself by making signs of assent or denial) but he didn't even want to listen to them. He always stayed behind, he was always in his world of him, and to make him work he had to be called back several times. In the space of about three months, however, the situation improved from the point of view of school performance, even if the difficulties in communicating with the teachers persisted. In the middle of the school year (about two months ago) we moved back to the country we moved from two years ago, and we re-moved our son to primary school in the new country. The problems obviously reappeared, even if fortunately he found some of his old classmates from kindergarten, with whom he bonded almost immediately. read the whole story >>>>

For other doubts about selective mutism you can write to the psychologist online on the mymodernparents.com forum

add a comment of Selective mutism, 10 things to know