Seventh month of pregnancy, all information 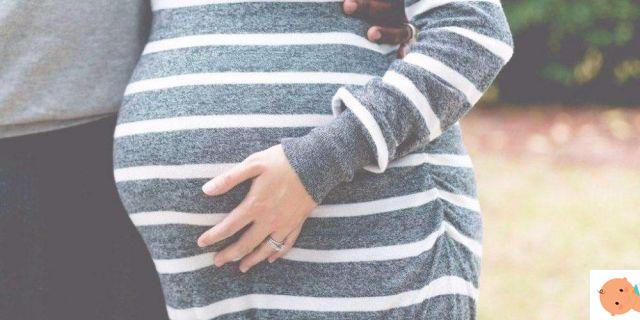 Third trimester at the start and last glimpse of pregnancy! How fast time passes, mothers. It seems like yesterday that you saw the magical two dashes appear on the test and, in no time at all, you are almost at the end. Of course, there may have been moments of difficulty, perhaps due to nausea or some small-big problem, but in any case the delivery room is getting closer and closer. The emotion starts to rise, right? Let's see what happens to mom and baby during the seventh month of pregnancy.

Seventh month of pregnancy: how many weeks it corresponds to

Seventh month of pregnancy: what happens to the mother

The shapes are now soft and round. Indeed, more than round! The weight has increased significantly and this is a crucial moment: during the third trimester hunger could be felt a lot and it doesn't take much to "rise" again. However, it is a risk that one should try not to take. Especially in the latter period, excess weight could lead to problems, for example the increase in blood pressure which, in turn, could trigger gestosis. Plus, it's not all that long before delivery and it's best to try to get there as fit as possible.


The uterus has swelled a lot to make room for the baby. It presses on the bladder and the comings and goings of the bathroom are continuous, right? Both day and night the urge to urinate has become urgent. All normal, the only thing to do is to be patient.

Even if there is still a long way to go, the body is preparing for the big day, that of childbirth. Almost all women clearly perceive Braxton-Hicks contractions (we talked about them extensively in the post on the sixth month of pregnancy): they are not yet the "good" ones, but they are needed for the uterus to be ready. A few drops of a yellowish liquid may come out of the nipples. Do not worry: it is colostrum, the first form of milk that the newborn baby will drink, extremely nutritious and precious. Not all, however, happen to produce it before giving birth.

Do you happen to feel anxious? You are justified. Particularly if you are in your first pregnancy, the unknown factor of childbirth arouses feelings of fear and, sometimes, anguish. Even if the preparation courses are very important and you are probably already attending one, the fears are natural because the thoughts that crowd the mind are many and not always positive. Try to share them with your partner, for example: you will feel better.

Seventh month of pregnancy: what happens to the baby

His kicks are now vigorous and well aimed. Even the future dad clearly perceives them by putting a hand on the belly. It is also possible to recognize a hand or foot, depending on the "bump" that appears on the abdomen. It is very important to keep an eye on your movements: to be calm, you need to feel at least 10 a day. We remind you that in the MyModernsParents app there is a special section dedicated to the kick counter.

If born in the seventh month, the baby would be considered extremely preterm (before 28 weeks) or very preterm (28 to 31 weeks). Sure, advances in medical research have led to an increase in the life expectancy of these puppies, but let's just say it's better if they stay warm in their mom's tummy a little longer. In fact, development is not yet complete at this gestational period and the consequences of such an early birth could be challenging. The fundamental problem is the lungs, which are not yet mature enough to allow the baby to breathe independently.

The fetus is very receptive to external stimuli, especially to sounds and also to light sources. His eyes are open. She is able to grasp things (like the umbilical cord), suck her thumb, and perceive different tastes depending on what mom eats (amniotic fluid changes flavor). The skin becomes less and less thin and, underneath, fat accumulates.

Seventh month of pregnancy: the most common ailments

Seventh month of pregnancy: the exams

If you have not done them yet, between weeks 24 and 27 + 6 the tests to be carried out by the National Health System are:

In this period, the so-called growth ultrasound, that of the third trimester, should be done. Until some time ago, it was paid for by the health system, but now this is no longer the case. Or rather, it is only so in the case of fetal or maternal pathology. Many mothers, however, decide to perform it for a fee, often also in 3D or 4D to get a very realistic image of the fetus.

The growth ultrasound evaluates several parameters to verify that the child's development is constant. In fact, this is the moment in which growth delays could occur, for example because the placenta ages: in these cases, it is sometimes necessary to intervene promptly or otherwise monitor the situation with the utmost attention.

It is perhaps one of the tests that most frighten mothers. At the idea of ​​having to drink glucose - an extremely sweet substance - many think that they will undoubtedly feel sick. And yet it is a subjective thing. There are women who, in the end, even find it very good.

The glucose load curve is used to diagnose gestational diabetes early, a complication of gestation that can be important. Diabetic women more often undergo a cesarean, children are often very large (from 4 kilos), there may be high blood pressure or gestosis. The causes are various: diabetes in previous pregnancies, family history of this pathology, overweight etc.

To perform this test, you must be fasting. By pricking the finger of the hand with a small needle, the blood glucose (so-called basal blood glucose) is measured. Immediately after that, 75 grams of glucose are given to drink. Finally, three blood samples are taken: one immediately after drinking the glucose, another after an hour and the last after two hours. The results will be compared with standard parameters and, based on those, it will be understood if there is a diabetes problem or not.

Tips for dealing with it better:

Seventh month of pregnancy and position of the baby

At this time, the fetus is generally placed upside down, that is, in the cephalic position, the natural position to come into the world. It doesn't mean she can't turn around yet, but obviously every mother-to-be hopes that everything will remain as it is. The breech position, on the other hand, indicates an abnormal presentation of the fetus: the head is turned upwards, rather than being engaged towards the birth canal. If the baby is breech it will present itself with the bottom or feet.

In the cephalic position, the head is turned down, the legs are up and flexed, the arms are gathered on the trunk and the chin rests on the chest. The fetus is then curled up, ready to go out. When this does not happen, the chances of being able to have a natural birth are reduced and, in most cases, a caesarean is proceeded to avoid risks to the mother and the baby.

Does a breech baby stay that way until delivery? Fortunately no. It can happen that it moves spontaneously even almost at the last moment, practically close to the birth, even if the more time passes, the less likely it is that this will happen. It is more a problem of space to be able to turn around.

So what? There are various attempts that can be made to try to reverse (it must be said) the situation. One of these is the so-called turning maneuver that the gynecologist makes from the outside to move the child. It is performed in the hospital and consists of a series of pressures on the abdomen that should make the fetus do a kind of somersault.

There are also other techniques, the effectiveness of which, however, is subjective. They are acupuncture (with the application of a needle in the little toe of the foot) and moxibustion (it always heats the same point, burning a mugwort cigar). Sport and some postural procedures are other tests that can be done.

During this time you could start preparing all the necessary documentation to go to maternity leave. These are the 5 months in which, compulsorily, a working mother stays at home. The leave can begin 2 months before the expected date of birth (and then continue for 3 months after the baby is born) or one month before (and 4 after). Generally, it is a choice of the mother, depending on the type of job performed.

Find out more Maternity leave: what it is and how to apply for it

The twenty-sixth week of pregnancy

In the twenty-sixth week of pregnancy, various discomfort caused by the growing uterus, by the baby pressing on the various organs, by the increasingly large belly may appear. But in general the body prepares itself best for childbirth. And the little one too! Missing less and less from your meeting.

The twenty-seventh week of pregnancy

Pay attention to the weight. From the twenty-seventh week of pregnancy it could increase a lot and there is no need to nullify the sacrifices made so far. Swollen legs and feet? All pretty normal. It is a venous problem. Alternate jets of hot and cold water. The fetus also takes a lot of grams, and the fat is deposited under the skin.

During the XNUMXth week of pregnancy, the preparatory Braxton-Hicks contractions are felt more and more frequently. You notice this because your stomach suddenly becomes hard, even though it shouldn't hurt. If you perceive a rhythmic movement from within it is the baby's hiccup.

The twenty-ninth week of pregnancy

Are you starting to feel some anxiety? Well, you're in the XNUMXth week of pregnancy, that's okay. It is not so long before childbirth: it is right to be well informed, for example on childbirth analgesia. The baby can now do a lot of things. A substance called surfactant is also produced that will make it breathe once it is born.

add a comment of Seventh month of pregnancy, all information