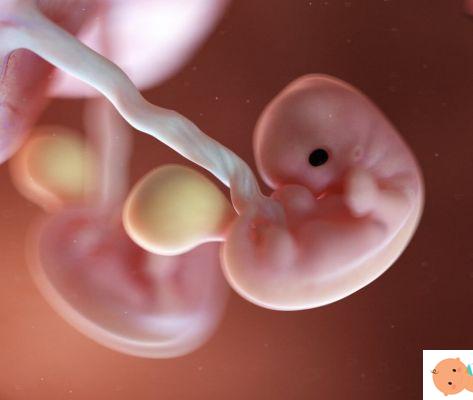 From the skeleton that begins to form to morning sickness: we discover with the scientific advice of gynecologist Elisabetta Canitano (president of the non-profit association Vita di donna) what happens to the maternal body and that of the fetus during the seventh week of pregnancy.

The first few weeks of pregnancy can also go unnoticed. Other times, however, they appear more or less pronounced symptoms, such as turgor and soreness of the breasts, sensitivity to odors, nausea, a hard and swollen belly, tiredness and fatigue, an increased appetite.

The need for mingle often: in this phase of pregnancy, peeing often is not an alarming sign, on the contrary, it is good to hydrate yourself a lot and continuously (two liters of water a day are recommended).

7 week of pregnancy no symptoms

If the symptoms disappeared do not immediately be frightened. There are many causes that could mitigate the effects of pregnancy on the body, so the outcome of the pregnancy will be fundamental to clarify the situation.transabdominal ultrasound.

The period between the sixth / seventh and the fourteenth week of pregnancy is the one in which the expectant mother usually undergoes the first ultrasound quarterly. Before the tenth week, however, it is very difficult to discern from the images an already defined shape of the embryo, which is still too small.

Already during the seventh week, however, the heart of the little one is already in full activity and pulses at a frenzied rhythm - more or less double that of the mother - and today's instruments can allow you to hear the forceful heartbeat.

The first trimester of pregnancy is crucial for the success of the pregnancy, therefore many control tests are concentrated during this phase of gestation.

In fact, after the first ultrasound, a pregnant woman can usually undergo:

Based on the results of the ultrasound and the aforementioned examinations, further invasive tests such as CVS and amniocentesis may be necessary.

From the tenth week it is possible to carry out the fetal DNA test, a screening and non-diagnostic test such as amniocentesis and CVS, which allows to identify early the risk that the fetus is affected by chromosomal abnormalities.

Images of the fetus in the nine months

Week after week pictures with the growth of the fetus during the nine months of pregnancy. See the miracle that brings the birth of a new life. From the union between egg and sperm to ...

Health tips in the seventh week of pregnancy

For about half of women, the first period of pregnancy is characterized by the annoying appearance of nausea accompanied by vomiting, especially in the morning hours (but not only). Added to this is another 25 percent who are nauseated only.

Sometimes, nausea and vomiting are so important that they prevent both the normal performance of daily activities and the possibility for the mother to feed adequately (hyperemesis gravidarum): in such an eventuality hospitalization may be required, to ensure that the mother and baby do not suffer damage due to poor nutrition and hydration.

The causes of nausea are not well understood. The most suggestive hypothesis is that the disorder appears to prevent the expectant mother from eating foods that would not do her good: in fact, when you suffer from nausea you tend to follow a healthy diet, that is, with very little fat and lots of fruit and vegetables. .

The advices: eating little and often is the first rule: the ideal is to do five small meals a day. Some women feel relief from sucking one candy even before getting out of bed. Others rely on various remedies, such asacupuncture, the anti-nausea bracelets, which act by exerting a slight pressure on a point of the wrist indicated by traditional oriental medicine as ideal to remove the disorder, the consumption of tablets or herbal teas based on ginger, the consumption of cola-based beverages. however, although some patients claim to benefit from it, there is no scientific evidence regarding the effectiveness of such remedies.

Cosmetics and products for the beauty of body and hair

It is a classic doubt of pregnant women: can these products be used during the waiting months? In general yes, they are safe, as long as they are controlled origin and, therefore, compliant with CE regulations. Go ahead, therefore, for moisturizers, conditioners, beauty masks, nail polishes, eye shadows, lipsticks and mascara.

With regard to hair dyes, AIFA (Agenzia Del Paesena of the drug) underlines that studies carried out on humans have shown that absorption by the body is very limited, except in the case where there are wounds or abrasions on the scalp. As a result, it can be excluded that the substances contained in the tinctures can cause harm to the baby and you can dye your hair 3-4 times during pregnancy. Given this, for caution we recommend avoid doing this in the first trimester.

Tips: even if the cosmetics are considered safe, always as a precaution it is not recommended to use the products listed below, as there are not enough studies to guarantee their total harmlessness for the child. In fact, in the scientific field a "prudent use" is recommended, but it goes without saying that to be completely calm it may be better to avoid:

The danger of miscarriage

Since the embryo remains attached to the placenta, the loss of a pregnancy it is a danger that - albeit in minimal percentages - concerns the first thirteen weeks of pregnancy.

Also read: Hard belly in pregnancy: when to worry

What to do in the seventh week of pregnancy

The most important thing to do in this delicate phase is do not strain: you have to rest whenever you feel tired. The drowsiness, the easy fatigue, the feeling of having little energy that sometimes characterize the first weeks of gestation are a sort of defense mechanism useful for inducing the woman to slow down and sleep more, to allow the body to begin to gather strength in view of the demanding task that awaits him.

Read also: Iodine in pregnancy: why it must not be missing in a mother's diet

It is common and physiological to feel small pains in the abdomen, especially in the lower part, which are caused by the changes that are taking place in the body and uterus, where theembryo it is nesting.

in first three months of pregnancy she won't put on a lot of weight (in fact she shouldn't gain weight at all) and her belly will start to be only slightly hinted at at the end of the first trimester.

The fetus in the seventh week of pregnancy

Having reached the seventh week, the head of the fetus - still similar in size to that of a large berry - is much larger than the rest of the body: a disproportion that will diminish over the weeks. The skeleton begins to form with the development of tissues that will become the spine and other bones, while the heart continues to grow, beating at a regular rate.

In this era, the presence of the baby is not perceptible from the outside (the baby bump has not yet delineated), nor can you feel its movements.

How big is the fetus at the seventh week?

Usually between 7 and 9 millimeters

When is the first trimester ultrasound done?

It is usually done between the sixth / seventh and fourteenth week of pregnancy.