Sex and intimacy in pregnancy 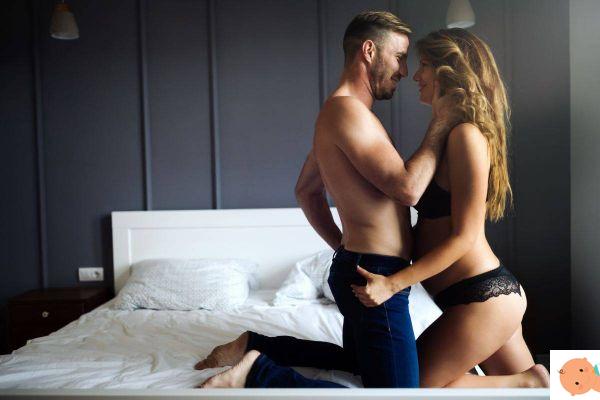 It is completely normal that the arrival of a pregnancy, with its inevitable change of perspective, the hormonal and bodily upheavals, any concerns for the safety of the baby, can temporarily change the couple relationship, at least on the levels of intimacy and sexuality. How to deal with the sex in pregnancy? How protect eroticism and intimacy of the couple when you begin to project yourself towards a whole new future? We talked about it live on social with the gynecologist and sexologist Chiara Gregori. Here are all his answers to our and your questions.


How the couple's sexuality changes with the arrival of a pregnancy

From couple to family

If pregnancy is sought, as soon as confirmation arrives with the famous positive test, the couple's attention immediately shifts to a level of planning explains the gynecologist and sexologist Chiara Gregori. You begin to imagine what the following months will be like and, above all, what the new life will be like for three. This is completely normal, but it risks becoming problematic if the planning plan incorporates all the other dimensions of the couple's life.

"We imagine the life of a couple as a three-legged table, which they are eroticism, planning and intimacy " suggests the specialist. "The table is balanced if the three legs have the same height, otherwise it becomes unbalanced. A certain imbalance in planning is inevitable when a positive pregnancy test arrives in your hands, but if there is the will to keep the table in balance , working with intention on the other two 'legs', the couple remains pretty solid even from a sexual point of view ".

Eroticism is not intimacy

Read also: Sex in pregnancy in the first trimester

All the factors that can interfere with the couple's sex life

When it is discovered that they are expecting a baby, for many couples the most frequent expectation is that his arrival will unite the couple in an inseparable way. That, in short, everything will be fine. In reality, together with that wonderful little creature that is the baby, they arrive, right from pregnancy, many small or large interferences which can undermine what Chiara Gregori defines as the cornerstone of a couple's sexuality, which is the playful, playful aspect. Let's see what these factors are.

In the first trimester of pregnancy, the hormonal changes experienced by the woman can lead to a decline in deso. Nausea, drowsiness, hypersensitivity to odors and strong breast tension (which can make even the simple touch of the breast painful) can also row against the desire for sexual activity.

"Even gynecological examinations in the presence of the partner, who has generally remained outside the gynecologist's office until now, can represent an interference in the couple's intimacy", Gregori stresses. "Suddenly, the partner finds himself hearing about nausea and intestinal problems and is confronted with the woman being placed in the gynecological position, with someone who starts 'fiddling' right there. It can be a little shock."

Concerns about one's appearance and the safety of the child

In the third trimester, on the other hand, sexual activity can be held back by the fact that the woman feels less attractive and embarrassed or by the concern - often also male - to harm the baby.

Read also: Sex in pregnancy in the second trimester

How to protect a pregnant couple's sex life

First of all the intention

"Generally, a lot of importance is given to spontaneity: many couples I see complain that sex is no longer spontaneous as 'before', but in the sexual field, spontaneity is not so fundamental. We cannot expect that heartbeat to remain forever, that desire to 'jump on him' of the first year or the very first years "says Gregori." What is important instead is protect intention, to have the desire to continue to nurture sexuality despite interference. This can lead to moments as intense and wonderful as those of the first meetings ".

If for Gregori "intentionality" is the first cornerstone to protect the couple's life in pregnancy (but in general during the whole life span of the couple), "flexibility" is the second. "The more the couple can adapt to changing conditions, the better." For example, if there are any contraindications to the penetration, this doesn't mean you can't have one anyway fulfilling sex life.

"Often we flatten ourselves on the idea that 'sex equals penetration', but that's not the case. Sex is physical pleasure given and received and this can happen in many different ways, besides penetration. Here then is that a contraindication can become an opportunity to remember this aspect and put it into practice ".

Intimacy, but up to a certain point

Another advice from Gregori concerns intimacy, which as we have seen could represent an obstacle to eroticism. "We must not think that always sharing everything is necessarily synonymous with the solidity of the couple. For example, during the gynecological examination it is not 'mandatory' that the partner is present in the front row ... He can also stay out at that moment, if he either the woman prefers it, or she can put herself in a more secluded position ".

Dad in the delivery room, or not?

According to Chiara Gregori, the experience of the delivery room does not necessarily have to be shared. "It depends on the deso of both, on how the possibility is experienced not only by the couple as such, but by each member of the couple. We must never make the mistake of considering ourselves two sweet halves: we must always try to be two whole sweets, in which everyone can feel happy to express their feelings without fearing the judgment of the other ".

Therefore, if the father and mother so wish, go ahead to the father in the delivery room, perhaps with some foresight on the part of the staff, who for example might worry about keeping the partner behind the woman. Otherwise it can be safely avoided.

In the face of some interferences - nausea, sleepiness, certain worries - it may also be worth reflecting on the fact that they are temporary and will resolve on their own within a few weeks (or a little more).

The case of Clio

Let's take a particular case, that of mother Clio who at five months of pregnancy has a psychological block with regard to relations with her husband: she is unable to have any because she is afraid that they may harm the child, even if the gynecologist has assured that this is not the case.

"Here: if there is a blockage, a refusal, the first thing to do is not look for the quick recipe to overcome it, but on the contrary stop and listen to it, because it can tell something important about one's history and experience. Then talk about it with your partner, possibly with the support of a specialist, if needed. On the other hand, it is fundamental do not force yourself doing things you don't want, or forcing your partner to do things you don't want. Always remembering the importance of flexibility".

What does the baby feel?

Some moms and dads are concerned that the baby will 'hear' what happens during a sexual act. It's really like this? "In reality, what the child feels is the well-being - or discomfort - of the mother, certainly not the act itself" explains Gregori. "If the mother is fine, then everything is fine. In the case of the father, however, what can happen is a certain difficulty in integrating within himself the image of a sexually active self and of a tender self to be a future father. it means that nothing can be done to encourage this integration: the first step, as always, is to talk about it together ".

Sex in pregnancy, how to do it safely

In general it is good for pregnancy

"If there are no particular medical contraindications, sex is good for pregnancy" declares Chiara Gregori. "It helps to strengthen the pelvic floor and the small uterine contractions that occur during orgasm are absolutely not dangerous. In fact, they help the uterus prepare for delivery."

Is it true that in the last few months it is better to avoid intercourse, because the sperm could stimulate contractions?

"No, in general there are no indications in this sense" specifies the specialist. "It is true that the prostaglandins contained in the spermatic fluid can stimulate small contractions, but we are talking about small contractions, which are actually beneficial because they help the body prepare for childbirth. On the other hand, they are absolutely unable to trigger a labor that he's not already leaving on his own. "

"On the contrary, intercourse can be indicated in the very last days of pregnancy, because in a moment in which the body is already 'in the balance' towards the start of labor and this is about to leave spontaneously, the prostaglandins of the spermatic fluid can give a little extra help ".

Read also: Sex in pregnancy in the third trimester

The positions to be preferred during pregnancy

"In reality there are no positions considered dangerous, although obviously some will be more uncomfortable than others," says Gregori. Suggesting that the ideal is to try and find "positions that make you both feel better, that make you feel more pleasure and that will most likely be different from those practiced most before pregnancy". On the other hand, every time it is always different "and this should remind us that it is not worth spending energy to try to 'be as before' and that instead it is useful to see diversity more positively".

The positions for the third trimester of pregnancy

The positions of love

One of the most critical and common problems during pregnancy is the encumbrance of the belly which can make movements more complicated and make some positions impractical, perhaps much loved by the couple. The most comfortable positions, especially in the last months of gestation, are:

The positions of love in pregnancy, the advice of the sexologist Marco Rossi

Many think that sex is almost taboo during pregnancy. Is it dangerous for the baby? How should it be done? Which positions to prefer? What, instead, to avoid? Environment...

When it is best to avoid

There may be medical contraindications to sex in pregnancy. In particular, these are all those situations in which it is necessary to avoid excessive uterine contractility, for example:

In any case, the gynecologist will indicate to the women, case by case, how to behave with respect to any risk situations.

TAG:
Sex and life as a couple: they are better if the father also takes care of the children (but not too much) ❯

add a comment of Sex and intimacy in pregnancy