Sexual intercourse in pregnancy, how to behave 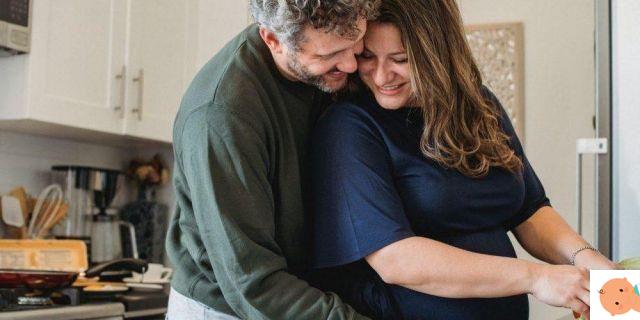 We have been in the Third Millennium for a long time, but the taboos around sexual intercourse in pregnancy strongly resist and are also difficult to eradicate. It's as if baby bump sex is something weird that shouldn't be done. There are those who still think that the child can be negatively affected or even suffer physical damage because mom and dad make love. All absolutely false! It is true, however, that there are some clinical situations that require "chastity". But if there are no contraindications, go ahead for the joys of sex throughout pregnancy! How do you deal with body changes? Simple: experiment!

Sexual intercourse in pregnancy: why it's good for you

Did you know that about 50% of "pregnant" couples renounce sexual intercourse during pregnancy without a real prohibition by the gynecologist? That's a very high percentage! But as we wrote a little above, the reasons why it should not be done are very few. In all other cases there is really no reason to give up. Yet, fears (both of man and woman) can get the better of you and make you miss really intense moments.

First of all, sex serves to strengthen the bond between partners even more when one's life is about to change due to the arrival of the baby. The choice to become parents is very strong and pregnancy, even if sought, can give rise to many fears. Being physically together, associating an open and profound dialogue, helps to feel closer and to overcome obstacles and doubts.

Then there is a purely physical component. Sexual intercourse and pleasure promote the release of endorphins, hormones of well-being that relax and make the fetus feel very pleasant. In addition, the pelvic muscles are supplied with more blood and the placenta is more oxygenated. Finally, the contractions of orgasm strengthen the muscles of the uterus, which thus prepares for labor.

When sexual intercourse in pregnancy is prohibited

Generally, the ban on sexual intercourse during pregnancy is related to health reasons:

Sometimes, stopping is temporary until the problem is resolved. For example, if there is a threat of miscarriage with a small detachment, you will need to avoid intercourse until it clears up. Or if you undergo invasive tests such as amniocentesis and CVS you are advised not to make love in the following 48 hours (they are those in which you usually have to rest a little more).

Positions for sexual intercourse in pregnancy

Like it or not, you have to adapt a bit. If at the beginning of pregnancy there are no big changes, as soon as the shapes change and the belly grows, we must inevitably invent something new. We give you some ideas, but then you will be in the bedroom to experience what makes you feel better.

Sexual intercourse in the first trimester of pregnancy

The first trimester of pregnancy can be both the simplest and the most sexually difficult at the same time. It all depends on how you are during the first few weeks of pregnancy. If you are "tormented" by normal gestational disorders, sex may be the least of your thoughts. Between nausea and fatigue, the condition is certainly not ideal.

Anxiety can also play tricks on you. Being relaxed and serene is the basis of a good sexual relationship with your partner. If, on the other hand, you are stressed or if you fear that something could go wrong, the conditions are not there. The first period of pregnancy is also the one in which intercourse is most often not allowed due to small big problems that make them dangerous.

If, on the other hand, you feel good and the gynecologist does not set limits, you can continue to live your sexuality in the most natural way possible. As the months go by, things will change and you will have to adapt to a new intimacy.

Sexual intercourse in the second trimester of pregnancy

In general and with due exceptions, the second trimester of pregnancy it is the quietest one. After the 13th week, the risk of a miscarriage is reduced and you will certainly feel more serene. Furthermore, the typical exhaustion of the first period is reduced and leaves room for a newfound energy.

During this period, sexual desire increases. The belly also begins to grow. So it's time to try something new. Look at it from a different perspective - it's a chance to try something different. It could therefore become a new opportunity for mutual discovery and love.

Sexual intercourse in the third trimester of pregnancy

And here the situation becomes complicated and not a little! All the fault of the bulky baby bump, of course. But not only of him. In the last weeks before giving birth, other obstacles to peaceful sex may arise. Do you want some examples? Here they are! Back pain, sciatica, gastroesophageal reflux definitely don't make things simple. But this doesn't mean that you can't find an alternative to be together: there are a thousand ways to be pampered.

A strange psychological mechanism then takes over in the third trimester. That is, it is often thought that new forms do not make us beautiful and desirable in the eyes of our partners. But this is absolutely not the case! Physical changes don't have to scare us because they are wonderful. And rest assured that your teammates also look great! So no fear.

Then remember that at the end of pregnancy, sex is a method of trying to start labor: the sperm in fact contains prostaglandins, substances that can cause contractions and which are used in hospital stimulation for this very reason. If the pregnancy goes beyond the term, try this pleasant ploy to try to induce childbirth in a natural way.

An enemy to sexual well-being in pregnancy is vaginal dryness. It is not necessarily there, but it is not uncommon. When it is very accentuated it can also make relationships impossible, despite the desire to have it. If that happens, don't feel guilty. You have no responsibility.

Underlying vaginal dryness is less lubrication of the vagina. In pregnancy (but also post partum) this is due to hormonal changes. Estrogen contributes to the well-being of the vaginal tissue, its lubrication, elasticity and acidity, elements that defend it from infections. When estrogen drops (such as in pregnancy, breastfeeding, and menopause), vaginal dryness and other disorders are more likely to occur.

Stress also plays in favor of this discomfort, while in other cases the cause may be the use of too aggressive intimate cleansers or a vaginal infection. This is why if you suffer from vaginal dryness you must always report it to your doctor, during pregnancy but not only. However, there is also a psychological aspect that should not be overlooked. While expecting a child, for example, many women (but sometimes their partners as well) are afraid to have sex because they are afraid of hurting the baby. And this can affect lubrication.

What to do? Lubricants and creams to be applied in the vagina are a solution to vaginal dryness, but not always. First, it is the doctor who recommends them because they must be compatible with pregnancy. Secondly, it is a temporary remedy aimed only at the success of a sexual relationship, but which does not permanently eliminate the question. Increasing the production of collagen, for example with specific supplements, is a more decisive method.

add a comment of Sexual intercourse in pregnancy, how to behave