Shaking syndrome: what it is, symptoms and risks 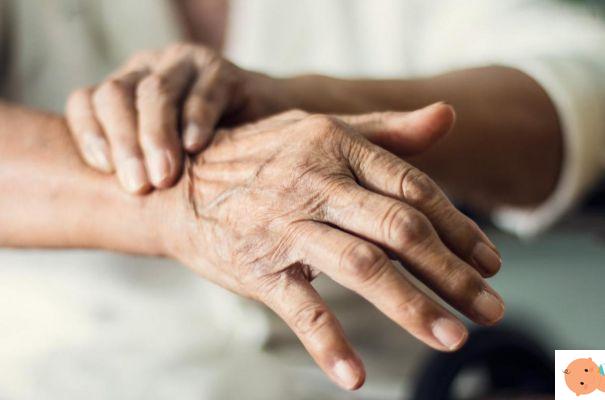 It was once called Shaking Baby, that is shaking of the child; today the most correct term chosen by doctors is Abusive Head Trauma, that is, non-accidental head trauma, head trauma caused by abuse.

An abuse of which sometimes the adult - usually the mother, but also the fathers or other figures who assist the newborn are not exempt - not even aware, unaware of the damage it can cause shaking the baby by rocking him or in the pram, in an attempt to appease a cry or a 'whim' that seems to never end.

Del Paeseni data on the size of the problem are very scarce, due to the difficulty of distinguishing the shaking syndrome from other forms of mistreatment of which the youngest are victims.

American estimates speak of an incidence of 20-30 per 100.000 children under the age of one, which in 20% has lethal outcomes and in more than half of the cases causes permanent neurological outcomes.

9 ways to make your newborn happy

Often it doesn't take much to make your baby calm and happy, even when some minor inconvenience such as indigestion or diaper rash occurs. The website www.parenting.com ...

"The factor that triggers the impulse reaction of the adult is generally the repeated crying of the child, which cannot be appeased in any way and which increases the load of emotional stress, in a crescendo that can culminate in the extreme gesture of shake it, "he explains Lucia Sciarretta, clinical psychologist and child psychotherapist at the pediatric neuropsychiatry unit of the Gaslini Hospital in Genoa.

"There is no will to do harm and for this reason the adult is not aware of the serious damage that this movement can cause; it is not for nothing that an enormous sense of guilt arises when he realizes it. Most of the time, moreover, he does not these are parents with pathological psychological problems, but people of an impulsive nature, emotionally vulnerable and perhaps already stressed for other reasons, such as economic problems, work, in the relationship with the partner: a combination of factors that go to vent on the child, which it is the weakest link in the chain ".

A very important risk factor is also the loneliness in which the mother finds herself after the birth of her child. At one time people lived close to their families of origin, who gave great support to new mothers, both practical and psychological. Today mothers find themselves almost in a state of isolation: the family is far away or unable to take care of the child, fathers, despite being much more present than in the past, delegate much of the management of the newborn to the mother.

The risks of shaking are very serious

The consequences on the child are variable and depend on the intensity of the maltreatment, but in a high percentage of cases they are very serious.

"Young children, up to 6-12 months, have larger and heavier skulls than the rest of the body, compared to a poor tone and ability to control the muscle structures of the head", highlights Emanuela Piccotti, pediatrician in charge of ready rescue of the Gaslini Hospital in Genoa.

"What's more, the skull is still being consolidated to allow brain development, so the brain structures are more fragile and more vulnerable.

Therefore repeated swaying of the head and neck can cause significant permanent outcomes "such as:

The lesions are not visible externally and i symptoms, the more marked the smaller the child, they are often non-specific:

So much so that the parent, unaware of the seriousness of what he did, goes to the hospital to find out what it is. "And in the emergency room the truth comes to the surface a little at a time, with the visit but above all with neuroradiological investigations, like a Brain CT scan or MRI at the level of the skull and spinal cord, and with the often confused and incoherent story of the adult involved "explains Piccotti.

"At that point, if the conditions are met, the hospital medical staff sends a report to the Prosecutor at the Juvenile Court, which, depending on the case, will evaluate how to proceed".

How to avoid: not leaving the new parents alone

Newborns should always be handled with care

La shaking syndrome it always derives from a voluntary gesture, repeated and done with a certain force. However, it is important that the caregiver of the newborn knows the basic information on the correct way to handle it.

"At least throughout the first year of life, the head must always be supported, avoiding letting it sway or making it shoot backwards or forwards ", Piccotti emphasizes.

"Furthermore, when you go by car, you need to keep the child in an age-appropriate seat, which adequately supports the head and neck, to avoid the light but prolonged shaking caused by the movement of the car".

What are the causes of shaking syndrome?

Can the risks of shaking syndrome be serious?

They depend on the intensity of the maltreatment, but in a high percentage of cases they are very serious.

Are the symptoms of shaking syndrome visible?

The lesions are not visible externally and the symptoms, the more marked the younger the child, are often non-specific: apnea, convulsions, vomiting.

TAG:
Cabin syndrome: how to help children and adolescents ❯

add a comment of Shaking syndrome: what it is, symptoms and risks