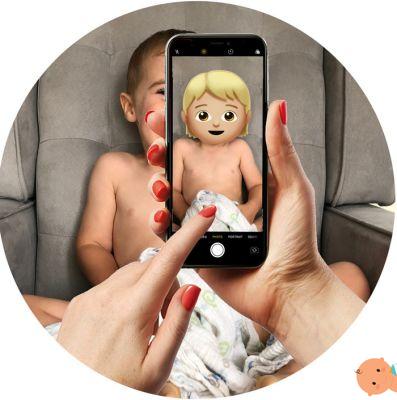 What are the risks of sharenting? Publish the photos of children on social media, Facebook and Instagram in particular, is a widespread trend that divides public opinion into two categories: those who believe it is a habit positive and harmless, who evaluates it dangerous and wrong. However, there is one third possibility: to publish just a few photographs of children, in certain contexts, with the consent of both parents, using settings of the privacy well defined, and with a cadence occasional.

Two experts on the phenomenon, called sharenting, frame the terms and suggest us how to behave: Alberto Rossetti, psychotherapist, author of the book "Be born, grow up and post", e Silvia Demozzi, pedagogist, lecturer at the University of Bologna.

Doctor Rossetti, is it possible to publish the photos of the children on social networks?

«Yes, there is no need to terrorize this fact. The problem arises when sharing becomes all-encompassing and my parent profile turns into a profile in which I only share facts about the children, not only through photos, but also through words and stories: at that point that profile no longer talks about me, it becomes a false profile of the baby, and it's worrying. It is not good for either the child or the parent. Instead, there is nothing wrong with publishing some images every now and then, with the right attention ».

Read also: Pedophilia and the Web, the appeal of the Guarantor: "Do not post photos of your children on Social"

So if I decide to publish some photos, what is the best way to do it?

"In the meantime, choosing the photos: they are not to be shared more pictures intimate (to give a simple example: the photos of the baths), but also photos that could result in the future embarassing for the children, from different points of view.


If you want to be strict, it would be better to avoid photographs too defined, of the child alone, out of context, while collective photos (in which we are all together and the attention is not entirely focused on the child) are generally fine. In any case, it is very important to restrict the settings of the privacy: You can easily make images visible to only a small group of people, such as family and close friends, by creating images listo un album for this.

What are the risks of excessive exposure?

“There is definitely a risk that these photos will be taken by malicious people, but the most common problem generally concerns the meaning it can have leave a trace of our children on social media, regardless of their will: growing up, the child may not even be happy to have all these public images. If in doubt, it is best to avoid deciding for him.

The cases of children who denounced their parents who had published their photographs are now known, but without reaching this extreme the fact remains that before tracing a life through the media, before building avirtual existence to their children, the parent should ask himself a few questions. Often the teenager needs to break away from the childish image: let's remember. Furthermore, Facebook's goal is retain minors: the less we publish, the more we will leave them free to choose in the future ».

Read also: Penalties for parents who publish their children's photos on the web: up to 10.000 euros

Doctor Demozzi, what are the reasons that push parents to publish their children's photos on social media?

«First of all, we must not point the finger at parents: the context is much broader, we are inserted in one culture of sharing, therefore, these are behaviors in line with the times, which call into question the relationship with technologies. From our investigations on the subject, in most cases parents have emerged who post photos of their children only on special occasions for the simple joy of sharing good times with friends and relatives.

Then clearly there are also those who do it compulsively. More dangerous are the groups, where mothers publish very intimate photos to exchange opinions on the health of their children, or create contests on the most beautiful child of the day: in these cases the postal police have also intervened ».

Why is it important to protect the identity of the child?

"The protection of identity is part of children's rights, even if it is less evident than rights such as health, family, play. It is a right which children cannot provide for themselves: parents therefore have the right and duty to protect the image of their children, even if, let it be clear, by publishing their photos they are not doing anything illegal.

What parents should do is try to think long term: when he is a teenager, will my child be happy with these images? Could he be embarrassed? Often, in fact, for teens la identity construction goes through a complicated relationship with your body. Another simple and important thing that can be done is to talk to children, who are already able to understand the phenomenon from primary school: some children like to be photographed, others don't».

Read also: Teens and the web: all the dangers of the web

What advice would you give to parents?

«To live up to childhood, not to ask children to do things as adults, to try to understand what they really need, which usually does not coincide with what we need, or what we want. Sharing photos on social media responds to a desire from parents, not from children. We are witnessing, in a more general context, a process of adultization of childhood: let's evaluate the opportunity, use the tools at our disposal with care, and with an eye to the future of our children. Finally, it is important that the parents talk to each other, and that the eventual publication of some photos is one joint decision».

TAG:
Stress in mothers affects the development of the baby's brain in the belly ❯

add a comment of Sharenting, parents posting photos of their children: watch out for when the situation gets out of hand