Shoah: how to explain Remembrance Day to children 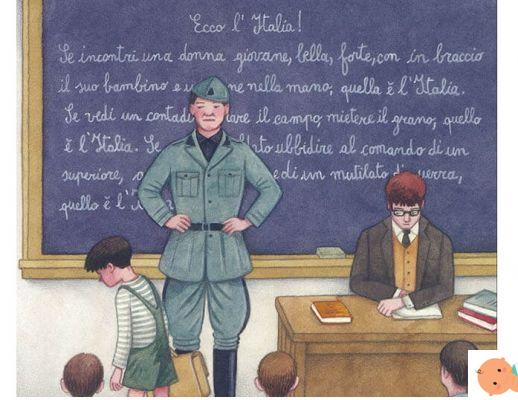 Wednesday 27 January is celebrated the Holocaust Memorial Day, an international event that every year commemorates the victims of the Holocaust, i.e. the genocide perpetrated between 1938 and 1945 by National Socialism and Fascism against the Jews and many other people deemed "weak" and "undesirable".

A date that was chosen since on that day in 1945 the gates of the concentration camp of Auschwitz, freeing the survivors. Explain a so painful concept, like the suffering and planned death of millions of people, the death camps, may not be easy if our interlocutor is a child. We asked for help from Lia Toaff, curator of exhibitions for the Jewish Museum of the city and specialist of the twentieth century.

How to tell Jewish history and culture to children

«It is important to celebrate the Holocaust Memorial Day to stop, at least once a year, to reason and reflect on what the systematic extermination of millions of individuals, for the mere fact of being Jews, has meant. However, the day should fit into a study path and in-depth analysis that does not begin in 1938 with the entry into force of the racial laws and does not end in 1945 with the end of the Second World War: to understand the Shoah one has to understand who the Jews are, how long they have been in Europe, their history and culture. Indeed, one must understand the historical process and not the single event, otherwise everything loses its meaning and decontextualizes itself, creating only confusion ».

How to explain the day of remembrance with a nursery rhyme

«Explaining the Shoah for what it really is (the extermination, the annihilation of human beings without distinction of sex and age, and the ways in which this happened) is not easy to deal with with children under the age of 13. However, it is possible to find alternative techniques not so much to explain, but to bring children closer to the discourse that will then be deepened over the years ".

Generally, in schools the theme is presented in the Primary School, starting from the fifth grade, through reading of passages, poems or watching films and documentaries, to then be analyzed in all its aspects during the years of secondary and high school, also through travels on places of memory.

How to avoid a traumatic approach for children

With children, therefore, it is necessary “to seek an approach that is as less traumatic as possible, avoiding, for example, macabre details and using tools such as books and films suitable for children. It must be borne in mind that a story like that of the Shoah cannot be told to children without filters; therefore films and documentaries in which images of death are seen and also films or books for adults and not specifically for children are to be avoided ”.

«Among the texts to read to address the theme of the Holocaust, advice "The friend found" by Fred Uhlman, "Now never again. The racial laws of 1938 explained to children" by Daniel della Seta, "The diary of Anne Frank" by Anna Frank , "Portico d'Ottavia 13" by Anna Foa. However, it is important to avoid, especially at the beginning, a private reading by the child: it should be assisted by a teacher, a parent or a pedagogist who approaches him to the topic without traumatizing him.

For movies tip "Train de vie - A train to live" by Radu Mihăileanu and "Life is beautiful" by Roberto Benigni. Also in this case, an introduction by an adult and a "debate" with questions at the end of the screening would be essential ».

Read also: Remembrance day: films on the Holocaust that even children can see

How to celebrate Remembrance Day together with children?

To celebrate this Day together with the children «the essential thing would be to carry out everyday activities trying to dedicate them to the" memory "of those who are no longer there, for example, with a drawing or a small action». Parents could, for example, “help the teacher make some research on the story of a child of those years, to then tell it to the children and bring them closer to that story by creating empathy and connection through the biography of their peers ".

"However, I believe that the use of rhetorical language with the usual slogans such as" never again "," not to forget "should be avoided, and not only for children: they risk emptying the true meaning of what happened and to bore.

La Shoah it should be studied and analyzed throughout the course of the year and not just during a single day: concentrating notions, images and words only risks confusing children and young people who are approaching this story for the first time ».

Read also: Poems on the Shoah

Primo Levi's poem, "If this is a man"

If this is a man

You who live safe

In your lukewarm homes,

you who find returning in the evening

Consider if this is a man

Working in the mud

Who knows no peace

What a struggle for half bread

Who dies for a yes or a no.

Consider if this is a woman,

Without hair and without a name

With no more strength to remember

Your eyes empty and your womb cold

Meditate that this was:

I command you these words.

Carve them into your heart

Staying at home walking away,

Lying down and getting up;

Repeat them to your children.

Or the house breaks down,

Your births twist their faces from you.

Read also: Phrases on the Shoah for children

When is Holocaust Remembrance Day celebrated?

Why is Remembrance Day celebrated?

To remember the victims of the Holocaust or the "Shoah", so called by the Jewish people.

TAG:
Shopping and children: 10 rules for a quiet day ❯

add a comment of Shoah: how to explain Remembrance Day to children