Sigmatism in children: what it consists of 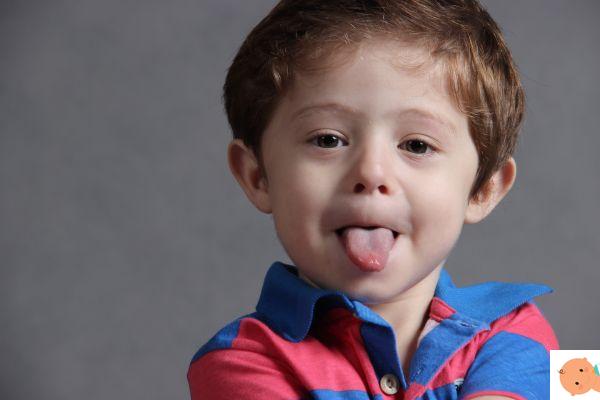 Sigmatism is one of the most common speech defects. It usually consists of altering the pronunciation of the letter "s" and "z".

Sigmatism in children: what is it

Babies begin to say their first words a few months, then it is a continuous learning: new words, new letters, new sounds. In most cases, if a sound is mispronounced, it is due to causes "functional", that is to the bad use of physiological structures. These speech deficits are called dyslalias. The famous" r's "and" esse sibilante "are the best known dyslasie widespread among children.

The tongue, in the articulation of the "s", is interposed between the dental arches, which are thus kept slightly apart.

This speech impediment is almost always associated with habits which cause the tongue to protrude outwards: sucking the pacifier, using the bottle, sucking the finger or cheeks. These habits, in fact, urge the tongue to remain between the dental arches in the typical position of the child who does not yet have teeth, while sucking the milk.

When you realize that your child has difficulties in linguistic articulation, you can turn to a speech therapist and orthodontist, who will be able to provide the necessary help to remove the causes.

The most common childhood dyslalias are:

Here are some simple exercises for pronouncing the "s".

If your articulation defect involves pronouncing the "TH" sound instead of the "S" sound, perhaps insert your tongue between your upper and lower incisors. Stand in front of a mirror so you can observe your mouth as you speak. Therefore, align the two dental arches and discover the teeth well in a wide smile. Place your tongue behind your teeth, against the roof of your mouth. Try to keep her relaxed without applying too much pressure. Now close the jaw and keep the teeth of the two arches in contact with each other. Keep smiling with your lips apart. Push the air out of your mouth.

Open the jaw slightly and separate the two dental arches. Press the sides of the tongue against the back teeth. Smile and try to say "IIT" by keeping the back of the tongue in the same position as you lift the tip as you say the "T" sound. If the "root" of the tongue moves downward as you perform the exercise, keep practicing until you can hold it in the correct position.

Practice often, at least once a day. When you are able to repeat the "S" phoneme several times in a row, try inserting it into sentences and words.

However, remember that it is better to contact a speech therapist and an orthodontist to better understand how to deal with the problem.

TAG:
Silent book, what they are and why they are important ❯

add a comment of Sigmatism in children: what it consists of