Singapore, a girl born at 25 weeks of pregnancy discharged 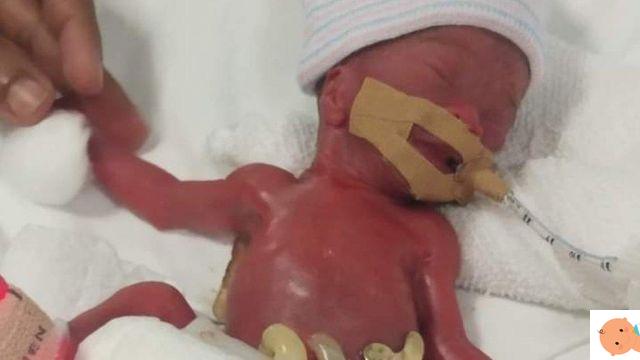 In Singapore, a girl was discharged after 14 months in hospital premature birth at 25 weeks of pregnancy. The baby, named Kwek Yu Xuan, weighed only 212 grams at birth and was about 24 centimeters long.

Coming into the world on June 9, 2022 in Singapore, the little girl had the same weight as an apple. Kwek Yu, after fourteen months of treatment, is finally fine and has been able to go home with mom and dad.

Born with an emergency caesarean four months ahead of schedule, little Kwek Yu Xuan is there smallest baby girl in the world survived a preterm birth.

To the baby's mother, Wong Mei Ling, 35, during her pregnancy preeclampsia had been diagnosed. The woman said she was shocked by the premature birth of the child, considering that her first child, 4 years old, was born without problems of any kind.

The doctors of the National University Hospital (Nuh) had spoken in a very early moment of "limited chance of survival" of the little girl. Today, however, they say that, against all odds and despite various health complications, the child has inspired all the people around her with her will to live, representing a ray of hope amidst the turmoil (also considering the difficult era of Covid-19).

The little girl still suffers from one chronic lung disease and will need aids to breathe. Despite this, doctors say the little girl should improve over time.

Premature, the situation in the world and in the country

A birth is defined as premature when it occurs before the 37th week of gestation. The majority of premature births (80%) occur between the 32nd and 37th week.

Over the past twenty years the number of premature babies in the world it is increasing. If in Africa and Asia the causes are often linked to poverty, malnutrition and the lack of correct diagnoses, in developed countries the increase is partly due to the increase in the average age in which pregnancies are faced but, it must be said , also because our diagnoses are more effective thanks to more rigorous checks that allow us to recognize any pathologies in time and therefore to proceed with the provoked premature birth, if necessary.


In Of the country fortunately, the survival rate of premature babies is among the highest in the world. It exceeds 90% even in the case of preterm babies weighing less than 1500 grams. at birth.

add a comment of Singapore, a girl born at 25 weeks of pregnancy discharged