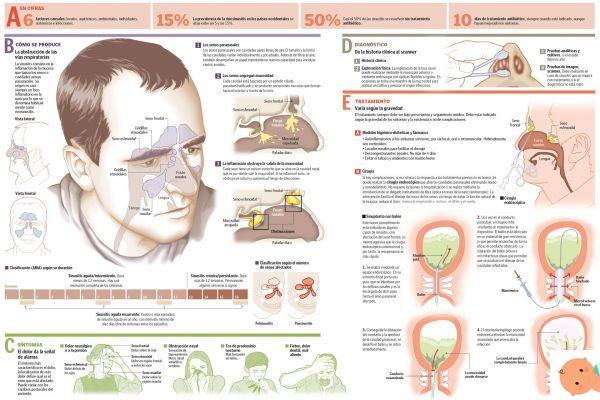 Sinusitis, what is it

Sinusitis is a 'inflammation of the sinuses, cavities that form inside the bones of the skull, remaining in communication with the nose. For this, they depend on the health of the nose for their ventilation and drainage of the catarrhal secretions.

"An inflammation of the mucous membrane that lines the paranasal sinuses can obstruct the so-called ostia, ie the openings through which the sinuses breathe and drain the secretions that form inside them" he explains Giovanni De Vincentiis, head of the otolaryngology department of the Bambino Gesù Pediatric Hospital in the city. "The stagnation of an increasingly dense phlegm inside the sinuses represents the ideal condition for proliferation of viruses and bacteria, which cause the infection ".

Read also: Phlegm in children, the 7 things to know

Because children often get sinusitis

Sinusitis is almost always the complication of one viral rhinitis, that is the common cold, which causes the obstruction of the hosts and therefore the superinfection by bacterial microorganisms.

This explains why the most prone to sinusitis are children, who experience viral inflammations of the other respiratory tract which, in about 5-10% of cases, become complicated in sinusitis. More exposed to sinusitis are also those who suffer from allergic forms, which cause congestion of the mucous membranes, or who have chronically inflamed adenoids.

After 7-8 years, however, they can come into play, as in adults, anatomical factors, as a deviated septum, which do not allow the paranasal sinuses to ventilate properly.

Finally, if they show up recurring episodes of sinusitis, there may be one weakness of the immune system or an alteration of the drainage mechanisms of catarrhal secretions.

Also read: 12 signs to tell if your child might have an allergy

How to know that a cold has turned into sinusitis? "A normal cold causes nasal congestion e catarrhal discharge for a period of about seven days "replies De Vincentiis.

"Rhinosinusitis should be suspected if these symptoms persist beyond ten days, plus fever, headache (especially upon awakening and localized in different locations depending on the sinuses affected by the inflammation), bad breath and cough - especially nocturnal - due to to the inhalation of catarrhal secretions, which descend from the paranasal sinuses into the lower airways, that is, into the trachea and bronchi ".

Read also: Headaches in children, all about migraines

The diagnosis is essentially clinical: in the first instance, the suspect of sinusitis is the pediatrician, through a careful medical history (the collection of the clinical history of the little patient) and a visit. In case of doubt, it can request the execution of anose endoscopy by an otolaryngologist: this is a non-invasive examination, which involves the insertion of a small tube into the nasal cavity, capable of highlighting the possible presence of characteristic mucous secretions.

More rarely it may be necessary to perform a CT scan of the facial massif.

In 40% of cases acute sinusitis tends to resolve spontaneously, perhaps with the help of frequent nasal washings with hypertonic solutions, which help to clear the nose of catarrhal secretions.

Read also: How to do nasal washes for babies and children

"In the 'severe' forms, that is when the symptoms are more intense and the fever is high, or if complications are suspected or when associated pathologies are present, such as asthma or catarrhal otitis media, it is necessary to resort to a antibiotic therapy lasting 10-14 days: the antibiotic of first choice is theamoxicillin; alternatively, 3rd generation cephalosporins can be prescribed "concludes the expert.

In some rare cases, it may be necessary to perform surgery, for example for the removal of the adenoids.

It is a serious, but fortunately rare, complication of sinusitis, and almost always of sinusitis of the ethmoid sinuses (the paranasal sinuses, in fact, depending on their location, are divided into ethmoid, frontal, maxillary and sphenoid), which causes ainflammation of the tissue around the eye.

It manifests itself with a significant swelling of the eye - which appears very red and swollen, almost impossible to open - eye pain, fever and general malaise. Children in the first 2-3 years of life are more susceptible to it.

"Since this is an important bacterial infection (the most common causes are Haemophilus influenzae and Staphilococcus aureus bacteria), the treatment involves the administration of antibiotics and cortisone intravenously for at least 7-10 days, which almost always resolves the inflammation completely, "he says Filippo Maria Tucci, otolaryngologist at the Bambin Gesù di of the city.

"Only in a minority of cases a CT scan may also be necessary to assess whether further complications have arisen at the intracranial level".

Other sources for this article

How do you know if you have sinusitis?

Sinusitis should be suspected if common cold symptoms (nasal congestion and catarrhal discharge) persist for more than ten days and if fever, headache, bad breath and cough are added.

How is sinusitis treated in children?

Acute sinusitis often passes on its own, perhaps with the help of frequent nasal washes. In some cases, antibiotic therapy may be required.

add a comment of Sinusitis in children: frequency, causes and remedies