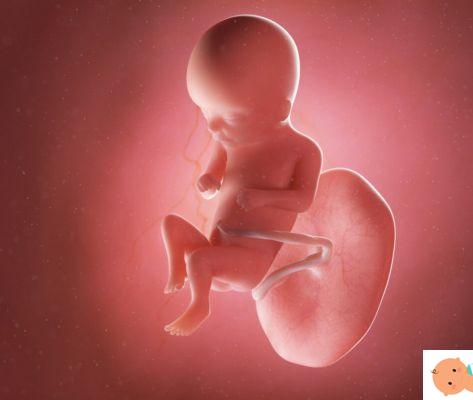 The fetus begins to develop the first hint of body fatwhile mom might be dealing with some problem constipation. With the scientific advice of the gynecologist Elisabetta Canitano, president of the non-profit association Vita di donna, let's see what happens to the body of the woman and that of the child during the sixteenth week of pregnancy.

Weight gain e fatigue they are quite common consequences in this phase of pregnancy. After all, now the baby bump starts to get very bulky and the baby grows more and more. Furthermore, hormonal changes significantly affect not only mood, but also digestion and intestinal regularity.

It is not uncommon for a pregnant woman to suffer from swelling e constipation, resulting from the difficulty of discharging according to the usual rhythms. Also headache they could become more frequent.

Other common symptoms are:

Read also: Heartburn and reflux in pregnancy: what to do when stress is causing them

Health advice in the sixteenth week of pregnancy

Sometimes, the expectant mother suffers from a chronic illness. Other times, she encounters some illness (even the classic seasonal ones, such as a cold) during her pregnancy. In short, there may be various situations in which the use of a drug is necessary. In general, taking a drug during pregnancy is very scary, because harmful effects on the baby are feared. But if you really need them, you have to take them, because they can be more dangerous (even for the baby, as well as for the mother), not to cure the disease that required it.

Advice: rely on the advice of the doctor, who will evaluate the case by case relationship between the risk for the child and the benefit for the woman. For example: a bacterial infection can only be adequately controlled with the antibiotic and far more dangerous would be disease not kept at bay than taking the drug itself. On the other hand, in the face of a cold without fever, you can avoid taking medicines, since natural remedies such as fumigations with steam or nasal washes with a solution of water and salt can give relief, without exposing the child to the potential toxic effects of a medicine. In general, any medicine, including those sold without a prescription (over-the-counter drugs) and pesticides (herbal teas, decoctions, extracts, and so on), should not be taken on its own, but only after consulting your doctor.

NB: The general criteria to which the doctor who prescribes drugs must comply are three:

The hormones triggered during pregnancy can have quite noticeable effects on the body. One of these can be a frequent feeling of constipation, due to the greater digestive difficulties (the muscles of the digestive system are more relaxed to make room for the uterus) ed expulsion excrement. In short, it is hard to go to the bathroom.

Advice: a good way to remedy this situation is by taking on a greater load than fibers. You could therefore enrich your diet with legumes, bran, foods with whole flours, fennel, cabbage and fresh fruit. Even a regular one physical activity and continues it hydration (read: drink a lot) help the body a lot to counteract constipation.

From the fifteenth week it is possible to carry out the amniocentesis test to identify any genetic diseases o congenital anomalies in the unborn child.

Today there are also several options that allow you to make one Down syndrome risk screening. It means that in this case a certain result is not obtained, but an estimate (actually more and more accurate and precise) of the risk that the fetus is affected. Possible options include:

Read also: Villocentesis and amniocentesis: which to perform?

The fetus in the sixteenth week of pregnancy

During the sixteenth week of pregnancy, the fetus is about 10 cm in size. It starts at form the skeleton (which, however, will end the process only after birth, so that bone elasticity can facilitate childbirth) and subcutaneous fat, which will help the small organism to maintain the right internal temperature.

Il heart keep pumping hard and i too movements they become more and more accentuated. In a few weeks, even the mother will notice the first football.

What are the symptoms during the XNUMXth week of pregnancy?

What month of pregnancy are we in?

The sixteenth week ends the fourth month of pregnancy

TAG:
Car seats for babies: the most common and most dangerous mistakes ❯