Sixth month of pregnancy, the things to know 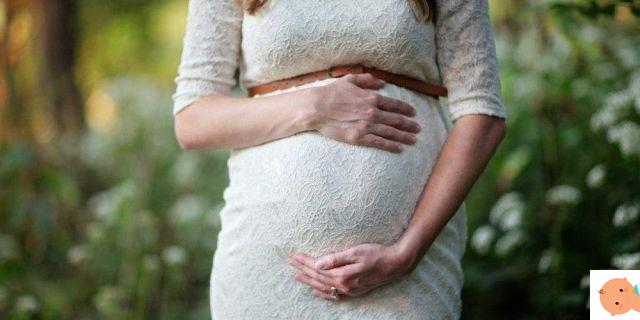 Last month of the second quarter! See how time passes quickly? At first it seems that 40 weeks are endless, but then you realize that they go by very quickly. With the sixth month of pregnancy, the turning point has been reached and the goal appears ever closer. Generally speaking, like the previous one, this month should also be pretty quiet (let's use the conditional though: there are always exceptions). Let's see the main news for mom and baby, the exams to do, the curiosities and advice.

Sixth month of pregnancy: how many weeks it corresponds to

Sixth month of pregnancy: what happens to the mother

Impossible now to hide the belly. Actually, why should you do this? Show it off with the utmost pride because what is happening to you is truly wonderful. In addition to the baby bump, the breasts also continue to grow. By this time you may have already gained a couple of sizes. Support him well with a suitable bra with wide straps and breathable fabric.

Let's stay on the subject. In some women, a few drops of colostrum may come out of the nipples which will be the very first nourishment of the newborn. It means that the breast is preparing for breastfeeding, even if it is not a rule for everyone: if there is no secretion during pregnancy, it absolutely does not mean that you will not be able to breastfeed or that you will not have milk.

During this time, the body produces less beta Hcg. You realize this from the fact that, apart from a few cases, you no longer feel nauseous. Instead, it increases the amount of another hormone, endorphins, which give a feeling of well-being. Thanks also to them, sexual deso grows. If there are no particular problems identified by the gynecologist (for example the risk of premature birth) it is better to take advantage of them.

Let's move on to another question, the cross and delight of every woman: weight. So far the gain should be between 5 and 6 kilos, but it is obviously variable. It could be more or less, depending on any ailments that have occurred or if the expectant mother has a tendency to gain weight. The point is always the same. On average, in the 9 months, about 10 kilos should be accumulated in total, but it all depends on the starting situation. In the case of overweight and obesity, the limit is much lower, while in the case of underweight mothers there is a little more tolerance.

Sixth month of pregnancy: what happens to the baby

The growth of the fetus is practically unstoppable. The little guy quickly gains weight and stretches out. It moves a lot and now the movements are clearly perceptible. In this period, especially towards the end of the month, even the father can finally feel the football by placing his hand on his belly. In this way he will be able to be truly involved and will feel less… excluded.

At this point in your pregnancy, you have almost certainly discovered sex. Generally, the morphology is the moment in which you have the surprise, but some little mischievous little ones make themselves desired. In the sixth month you should know by now.

The lungs continue to mature, but they would still not be able to function perfectly if the baby was born now. His skin becomes smoother and less wrinkled thanks to the fat that is depositing under the skin. The skin is also starting to accumulate melanin, although it will take a very long time before it can produce enough to protect it from ultraviolet rays.

Sixth month of pregnancy: the most common ailments

Even if we have said that the sixth month of pregnancy is quite peaceful, this does not mean that small annoyances cannot occur. There are extremely lucky women who are fine for 9 months, while others are not. We list the most common.

Disorders such as leg cramps, stretch marks, chloasma, urge to urinate often, headache may then appear.

A sudden hardening of the belly, not exactly a painful sensation, but one that takes your breath away anyway. A kind of cramp that takes up the entire abdomen for a few seconds and then disappears. From this month onwards it can happen to experience this sensation. They are called Braxton-Hicks contractions, a normal and physiological phenomenon.

Those of Braxton-Hicks are not the contractions that are experienced during childbirth, but are called preparatory. The muscles of the uterus contract to prepare for the time of birth. Typically, these are isolated episodes, although they may occur multiple times throughout the day.

When should they worry? It is advisable to consult your gynecologist when the contractions become painful and regular or if they are accompanied by loss of blood or fluids. In this case, they may no longer be preparatory, but the "real" ones. And by the sixth month of pregnancy it is still too early for that to happen. This is why medical advice is needed.

Sixth month of pregnancy: the exams

Between weeks 24 and 27 + 6 the examinations to be performed by the National Health System are:

The sixth month of pregnancy is ideal for starting a preparatory course, very important to get ready and aware for the big day. The course is held by various professionals. Each of them explains a specific aspect of labor, delivery and even post partum, a time when support for new parents is essential.

In general, you will meet an obstetrician, gynecologist, anesthetist, pediatrician, neonatologist during a preparatory course. Other specialists could also intervene, such as the psychologist, the nutritionist, the pediatrician, the expert in pediatric unblocking maneuvers or in the conservation of stem cells.

The topics are the most diverse: from the physiology of childbirth to contractions, from pain management through natural techniques (such as breathing) to childbirth analgesia (with epidural), from breastfeeding to rehabilitation of the pelvic floor. This is a very small list compared to anything you will hear about.

There are many types of prep courses. Almost all public and private birth centers organize them. Doing it in the place where you decide to give birth is a good idea to become familiar with the structure and the staff. For example, you could visit the delivery room. There is also the possibility, however, to choose a private course, which could offer something more than the classic one in the hospital. For example, lessons in the pool or with yoga or pilates instructors. Evaluate what you prefer. And take the future dad with you!

The conservation of stem cells

This technique allows, at the moment of delivery, to take the stem cells from the umbilical cord. The cells are then stored and, in the event of future problems for the child, can be reused. In fact, they have proven to be very useful if certain blood disorders occur.

The twenty-second week of pregnancy

In the twenty-second week of pregnancy, both the mother and the baby grow up. You tend to gain weight, while your baby's progress continues to be important, even though she sleeps a lot. With the discovery of sex, which presumably has already taken place, we can give the green light to all names. Do not be influenced by anyone: it is a choice of the couple!

The twenty-third week of pregnancy

During the XNUMXrd week of pregnancy you may find that the navel has become protruding. It is quite normal, which happens because the uterus, getting bigger and bigger, presses. Everything will return to its place. The baby's brain develops a lot and will continue to be so practically until delivery. It is also for this reason that the bones of the skull will only solidify after birth.

The twenty-fourth week of pregnancy

Your body's metabolism has changed. And so, even if the 600th week of pregnancy is in the winter, you may still feel warm. The uterus compresses the bladder, making you go to the bathroom often, but also the stomach, making some ailments such as heartburn and reflux worse. The little one weighs about XNUMX grams and recognizes his mother's voice, the music she prefers.

During the XNUMXth week of pregnancy it becomes very difficult to pick up anything that falls on the ground. The belly is really bulky, but there is no future mother who does not feel beautiful. Watch out for blood pressure and hints of orange peel on her legs. If the abdomen is up and down, do not worry: drinking a lot of amniotic fluid, the little one could have hiccups.

add a comment of Sixth month of pregnancy, the things to know