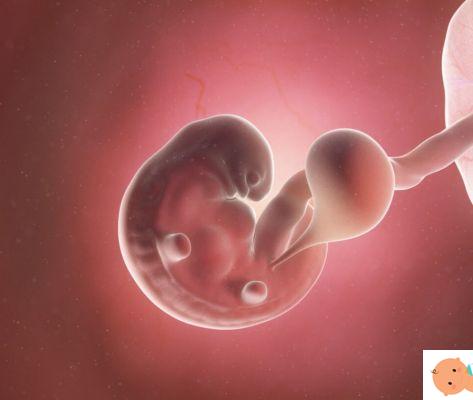 A small heart that begins to beat strongly and symptoms of varying intensity that introduce the future mother to the joys (and pains) of gestation: we find out with the scientific advice of gynecologist Elisabetta Canitano (president of the non-profit association Vita di donna) what happens to the maternal body and the fetus during the sixth week of pregnancy.

Symptoms of the sixth week of pregnancy

One of the most common symptoms is the loss of blood (one in four women suffer from it), but the range of effects that can characterize this period are very varied:

These conditions are caused by the fact that the organism is now ready to welcome the development of the new life and therefore begins to radically modify its tasks according to the growth of the fetus.

What if there are no symptoms of pregnancy?

Apart from theabsence of menstruation therefore, sometimes the first weeks of pregnancy can also go unnoticed. Other times, however, they appear more or less pronounced symptoms (such as turgor and soreness of the breasts, sensitivity to odors, nausea, a hard and swollen belly, fatigue, increased appetite) that are not recognized or traced back to the beginning of a gestation.

This is the period to make a pregnancy test (just the simple DIY kit that you can buy at the pharmacy or supermarket) that detects the presence in the urine of a hormone produced just in case of pregnancy, the chorionic gonadotropin (beta-HCG). In most cases, however, from the sixth to seventh week the signs of pregnancy begin to change visibly the maternal body

beta-HCG
Beta-HCG is a hormone produced by the first draft of the placenta: the pregnancy test that is performed on the urine is positive when it detects its presence. The trend of carry out the measurement of beta HCG in the blood, in order to determine if the pregnancy has really started and how it is progressing. In reality, except in special cases, there is no reason to routinely perform this test. The dosage of beta in the blood is useful when the operator following the pregnancy (obstetrician or gynecologist) deems it necessary to know as soon as possible if the course of the pregnancy is regular because there are problems (for example a suspected extrauterine pregnancy). To get this information from the dosage of Beta in the blood, it is necessary to perform at least two samples 48-72 hours apart from each other: in principle, if all goes well, the beta value doubles every 2-3 days.

Sixth week of pregnancy, the betas

Il Beta hCG test allows you to measure the value of human chorionic gonadotropin hormone in the urine or blood, checking for any state of pregnancy.

Il test and relative Beta levels can be detected:

Il beta levels they can vary from woman to woman in relation to a pregnancy that proceeds normally. They not only identify the presence of a pregnancy but can be prescribed by the gynecologist to assess whether a pregnancy is progressing well.

Depending on the amount of beta hCG present in the blood, it is therefore possible to establish in which week of gestation the woman is found.

Health tips in the sixth week of pregnancy

The radical changes undergone by the body can often lead the expectant mother to suffer moments of physical discomfort or pain psychological.

It can happen that you feel a little low in tone and cannot understand why, since expecting a baby is just what you wanted. The responsibility lies with both the new hormonal structure, to which the organism must adapt, both to doubts, questions, fears that understandably arise in the face of a great change such as that of becoming a mother.

Advice: The best thing to do is accept the situation for what it is, driving away any feelings of guilt with determination. Being sad does not mean that you are not good or that you are not preparing your child for the welcome he deserves. The fluctuating mood is a possible eventuality, destined most of the time to resolve itself already around twelve weeks.

Frequent indolence and physical ailments more or less mentioned are quite common consequences of the first weeks of pregnancy.

Advice: a good diet (varied, balanced and low in calories) and the practice of conscious sport (without exaggerating) can be very helpful in reinforcing the mother's body and spirit.

Read also: What is seen in the ultrasound of the sixth week of pregnancy

What to do in the first weeks of pregnancy?

The danger of miscarriage

Since the embryo remains attached to the placenta, the loss of a pregnancy it is a danger that - albeit in minimal percentages - concerns the first thirteen weeks of pregnancy.

Read also: Miscarriage: Symptoms, Causes and What to Do

The gestational chamber is the structure that is created inside the uterus for host the embryo. Normally the appearance of this "chamber" - found during the first ultrasound - is one of the first evident signs that determine the onset of a pregnancy.

What if the gestational chamber is not seen?

Sometimes it can happen that the gestational chamber is not detected during the first ultrasound. One reason may be that the embryo is smaller than expected, perhaps due to an error in the calculation of conception. There is also the possibility that it is an extra-uterine pregnancy.

In the most serious cases, however, the absence of this structure signals the failure of the egg to develop and therefore the prelude to a spontaneous abortion.

The fetus in the sixth week of pregnancy

Already from the sixth week the fetus - which technically is still an "embryo" - begins to show the slow development that will be completed only at the end of gestation. The head begins to swell and the lesions begin to develop ears and to take shape Dita of the hands and feet.

Even the eyes - two black dots that stand out from the rest - ei facial features are more evident, as well as the vertebral column, which, far from assuming its final shape, creates a kind of small tail that will become invisible when the fetus has enlarged enough to "encompass" the entire spine .

To surprise for its power, however, is the heartbeat, which pulsates almost twice as often as that of the mother who "hosts" it!

When do we enter the sixth week of pregnancy?

In the middle of the first quarter. The custom sets the first day of the last menstruation as the beginning of gestation.

When do you start seeing the gestational chamber?

How the woman's body changes in the sixth week of pregnancy

La sixth week of pregnancy corresponds to second month, so you are in the first quarter.

In this period the beta level increases and this could lead to some minor annoyances, such as nausea, but it is always very subjective and varies from woman to woman.

What happens to the body?

The lines become softer, Theabdomen begins to take on a rounder appearance and the breast it increases in volume and is fuller. I nipples they may appear darker and more prominent. L'weight gain at this stage it depends on the condition of the woman before gestation. In principle, weight gain should not exceed 500 g.

TAG:
Sixth month of pregnancy: what happens, symptoms and visits to be made ❯