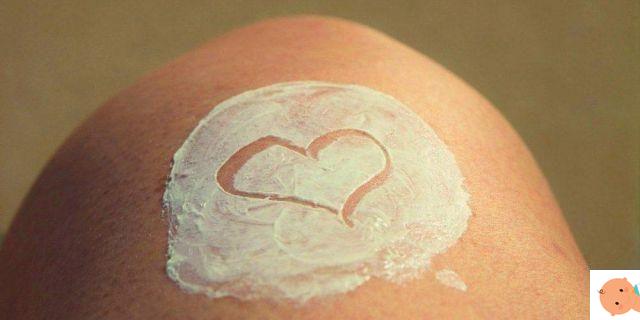 As happens practically to the whole body, even the skin during pregnancy undergoes changes which, in the majority of cases, are caused by hormonal modifications. In other words, the blame for blemishes such as blemishes, pimples, stretch marks, dilated capillaries can be safely attributed to hormones. Obviously this does not necessarily happen and the opposite can happen: with the belly, the skin improves, giving a beautiful and healthy appearance.

The Ministry of Health, in the large section on pregnancy, dedicates an in-depth study to the skin, with useful information and practical advice. Let's take a look together.

Pigmentation is, quite simply, the color that the skin takes on thanks to melanin, the pigment responsible for the color of the skin, hair and eyes. During gestation, an increase in pigmentation occurs very often (about 95% of cases). This happens from the very beginning of pregnancy and the phenomenon is more frequent in women who have dark complexions.

Some parts of the body darken more noticeably: the mammary areolas (the part around the nipple), the armpits, the genitals. In addition, the so-called “linea nigra” is formed, a darker strip of skin running from the navel to the pubis. It doesn't occur in all women, but it's a classic pregnancy trait. Due to hyperpigmentation, freckles and scars can become more noticeable.

A particular case of increased skin pigmentation is melasma, also called "pregnancy mask". It occurs with dark spots on the face, especially on the forehead, cheekbones and upper lip. According to ministry estimates, 50-70% of pregnant women suffer from it. The problem worsens with exposure to sunlight, even if the mechanisms underlying the onset of melasma are unclear. What is certain is that there is a genetic predisposition.


How to prevent the "pregnancy mask"? The best way is to use a cream with a high protection factor from UVA and UVB rays. It should not be applied only on vacation, but also daily in the city. Furthermore, it is always better not to expose yourself directly to the sun. If the pigmentation is deep it is more difficult to cure than the superficial one. The treatment can be carried out after giving birth and consists in the use of lightening creams and chemical peels.

The increase in estrogen during pregnancy can be at the basis of some circulatory alterations. Nothing serious, of course, but some can be aesthetically annoying. An example? The dilated capillaries. For example, some of you will have noticed that you have a pattern of small purple veins on your legs. The underlying problem is the loss of tone and elasticity of the vascular walls.

Weight gain and the squeezing uterus make it difficult for venous return from the legs to the heart. A sedentary lifestyle can also make the disorder worse. It is therefore essential to move. Also, a food supplement to strengthen blood vessels can be of great help.

Another typical circulatory alteration, especially in the third trimester, is constituted by stellar angiomas. It is a small red central dot from which very thin capillaries radiate radially. They affect 15-30% of pregnant women.

Sometimes a reddening of the palms of the hands may appear. Also, often due to hormonal changes, the gums are swollen and bleeding. You need your dentist's opinion. By the way: when you are pregnant, dental visits are absolutely not prohibited. Neither does the treatment.

Here it is, the worst nightmare of anyone expecting a baby: stretch marks. Those red or white streaks are really unsightly and, above all, when they appear it's hard to get rid of them. They are scars caused by the breakdown of collagen fibers in the deepest layer of the skin, the so-called dermis.

Over half of pregnant women experience stretch marks. They typically occur towards the end of pregnancy, particularly on the abdomen, hips, and breasts. The causes are hormonal (increases cortisol, capable of weakening the elastic fibers, collagen and mucopolysaccharides that form the scaffolding that supports the dermis) and mechanical (due to rapid changes in the volume of the skin). Furthermore, there is a genetic component.

Prevention is the watchword against stretch marks. The use of a good anti-stretch mark cream, proper nutrition (rich in water, proteins, vitamins and antioxidants), proper hydration (at least 2 liters of water per day), moderate exercise, the intake of supplements for elasticity skin are all elements of an effective preventive strategy.

What if they appear? We intervene after childbirth with chemical peels, radiofrequency, laser.

How hair and nails change

During pregnancy, both hair and nails grow faster. Thanks to the action of estrogen, the hair follicle cycle lengthens. Therefore, the growth phase (anagen) increases, while the resting phase (telogen) is reduced. The hair therefore appears thicker, shinier and more beautiful. After childbirth, things often change: hair falls out profusely due to the collapse of estrogen. The phenomenon is called telogen effluvium and lasts 3-6 months.

Also after giving birth to your baby, androgenetic alopecia can occur. The causes are post partum stress and iron deficiency, typical of the breastfeeding period. Gradually the hair thins out in the central region of the head and, as this happens, the scalp is clearly seen. In younger women, the thinning is more evident on the forehead.

In pregnancy, especially in the first trimester, care must be taken with the tinctures used. Natural products are preferred, without ammonia or other potentially harmful substances.

As mentioned, fingernails and toenails also grow faster. Experts from the Ministry of Health suggest that, in the first three months of gestation, it would be better not to apply artificial nails because some substances used could be harmful to the fetus. In addition, false nails must be removed before delivery.

Learn more: Hair and nails: taking care of them during pregnancy

Skin in pregnancy: other skin changes

add a comment of Skin in pregnancy, expert advice