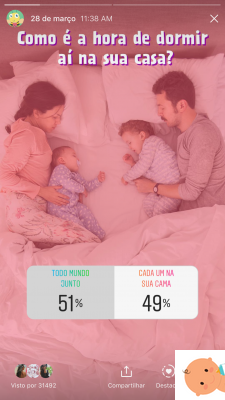 Puppies don't sleep alone. This is the title of the book (Mondadori, 2022) by perinatal psychologist Alessandra Bortolotti, an expert in breastfeeding, child care based on contact and infant sleep. The book is dedicated to this theme - the sleep of children. Forget the classic manuals on methods and rules for making babies sleep. Here the point of view is completely different: to help parents become truly aware of their choices, whatever they are, even if they go against the grain. Even if, for example, they bring mothers and fathers to sleep with their puppies, occasionally or continuously, in the same room or even in the same bed.

The author states it openly: the book does not want to suggest to parents how they should make their child sleep, but it does want to provide them with the as much information as possible on a thorny issue like shared sleep, or co-sleeping or bed-sharing. Information based on scientific evidence, but where the sciences examined are not only medical, but also psychology and anthropology.

The starting point of the whole question is cultural rather than scientific. "Our educational culture is based on the early detachment of children, in the name of their presumed autonomy and independence "writes Bortolotti. Thus, it becomes normal that" babies have to sleep alone and all night as soon as possible, that they have to leave the breast within the first year of life, that they have to adapt to the rhythms of adults and that the dimension of unknown, uncertainty and novelty determined by the arrival of a newborn must be somehow controlled ".

And again, according to Bortolotti it is a culture that tends to ignore the emotions of children, especially the negative ones. The result is the proliferation of indications, advice, rather rigid methods, which aim to teach parents how to get the child to indulge them: do not cry, do not scream, sleep alone in his bed and so on.

This cultural attitude - says Bortolotti - prevents parents from listening authentically to their child and their relationship with him, it leaves no room for maternal and paternal instinct, pushes mothers and fathers to conform to avoid ending up in the crosshairs of negative judgments. of those around them, be it pediatricians or other experts, nannies, family members, friends.


Well, it is precisely this vicious circle that the author aims to unhinge with her book, offering information, food for thought, tools, so that each parent can decide for himself in which direction to move, especially with respect to behaviors that are mostly socially condemned - such as breastfeeding for a long time or sleeping together - but which are natural and have no contraindications based on scientific evidence. In a word, points to the emporwment of moms and dads.

With this goal in mind, the underlying idea is to demonstrate that many false myths hover around the sleep of babies, now deeply rooted but precisely devoid of scientific validity. Here are the ones examined in the book.

1. Accustom the child to sleep alone in his room

If you decide to let your baby sleep with you, he will never be autonomous and independent. You need to get him used to sleeping alone in his room as soon as possible.

Bortolotti writes that there is no scientific study to support the validity of this bias, which moreover is rooted only in Western society. "In other cultures, babies and children sleep in the same room, often even in the same bed as their carer, even up to adolescence."

The psychologist also calls into question the evolutionary history of the human being: "For our children, the night is a symbol of absence, darkness, silence and lack of security, even if we no longer live in caves like our ancestors". Of course it is also a a moment in which comfort and reassurance are sought.

Wanting to sleep next to mom and dad is not a vice, but a need. And satisfying it does not mean putting the child's ability to grow autonomous and independent at risk.

On the contrary: various studies connect thecontact-based care - which may also include sleeping together - and the child's ability to develop a solid sense of independence.

2. All babies are able to sleep alone and through the night starting from the sixth month of life

All babies are able to sleep on their own and go all night from the sixth month of life, or even earlier. The nocturnal awakenings of children are physiological up to at least 3-5 years of life.

Babies sleep differently than adults. For example, they spend more time in the so-called REM phase, the one in which you dream and in which it is easier to wake up. They also tend to move from one phase of sleep to another more often: another aspect that facilitates awakening. All differences that would have to do with the brain maturation processes.

So: If your baby wakes up often it doesn't mean that something is wrong and that he is suffering from sleep disturbances. More than the number of nocturnal awakenings, worrying should be the child's inability to go back to sleep after waking up. "Children with sleep disorders are not those who wake up frequently at night, but those who do not go back to sleep for hours after waking up," writes the psychologist.

MyModernParents.com offers you a series of cute pictures about the little ones and about bedtime. Here is a sweet photo gallery with the most beautiful sleeping babies on the web

3. Your baby will no longer wake up if you stop breastfeeding and switch to formula milk

It is not at all obvious that switching from mother's milk to formula milk makes the baby sleep more.

It is true that the digestion times of the milk in formula are usually longer and could lengthen the night's rest, but theas a rule, however, it is not ironclad.

4. The mother who breastfeeds even at night sleeps badly

It's true: breastfed babies tend to wake up more often, because they have faster digestion times and go through less deep sleep phases. However, this does not mean that the mother necessarily sleeps little or badly: in general, the rhythms of sleep and breastfeeding of mothers and babies are synchronized, even before birth, and studies suggest that this synchrony protects the sleep quality of mothers and babies.

Bortolotti reports the words of anthropologist Helen Bell, director of the Parent & Infant Sleep Laboratory at the University of Durham, England: "Several studies have found that although bed-sharing with nursing mothers leads to more frequent awakenings for breastfeeding, they stay awake for shorter periods, falling back to sleep faster and longer of those who sleep on separate surfaces ".

5. Methods and recipes for getting a baby to sleep alone are certainly harmless and have no long-term consequences

Let's talk about methods that should teach the child, in a more or less "hard" way, to fall asleep alone and sleep through the night. The best known is certainly the so-called Estivill method, who plans to let the baby cry for increasing intervals of time, until he learns not to complain when he is put to bed. Another example is that of the EASY method, proposed by the English pediatrician Tracy Hogg in the book The secret language of newborns.

Naturally, a parent who is fatigued by their child's frequent nocturnal awakenings will be tempted to try them, and often it is even pediatricians, midwives or nannies to advise them. In the belief that at best they will not work, but they will still be harmless. For Bortolotti, however, things are not exactly like this.

To begin with, he writes, there is no solid evidence that they actually workSome studies seem to suggest that they may work in the short term, but not in the long term. Not only: they can be a source of great stress for both children and adults who put them into practice. More stress means greater production of cortisol, a hormone that is produced in response to stressful situations. And more cortisol in childhood could mean less ability to react to stress in adult life.

Hypotheses, of course, but on which it is worth spending a thought before deciding how to get your puppy to sleep.

6. Sharing the bed is always a dangerous choice

Generally, when we talk about cosleeping we also talk about cradle death, SIDS. Indeed, in the past some studies have suggested an increased risk of SIDS in case of shared sleep, and many pediatric societies, starting with the American one, the American Academy of Pediatrics, strongly advise against this choice.

In a chapter dedicated to the topic, however, Bortolotti explores these aspects, underlining how many studies have not distinguished between different situations (for example, the fact that the child was breastfed or artificially, which has profound repercussions on the type of sleep of the child. baby and mother) and between different risk factors.

Some risk factors are now recognized as very important, and in particular the fact of leaving the baby to sleep on his stomach - the baby should ALWAYS be placed on his stomach - and exposure to cigarette smoke, particularly if the mother smokes and did so even during pregnancy. Other risk factors are: low weight of the child, overweight or excessive thinness of the mother, consumption of alcohol, drugs or psychotropic drugs by parents and, as regards sleeping together, sleeping on armchairs and sofas, using mattresses or very soft pillows, not to use the appropriate safety rules, especially if the baby takes artificial milk.

If you decide to sleep with your baby:

Read also: Doudou, what it is and how to use it

7. Sleeping all together means sleeping badly. And in any case the couple suffers

With respect to inconvenience, every family generally finds a way to adapt, perhaps by enlarging the bed or buying a king-size one.

As for the risks for the couple, for Bortolotti it makes no sense to generalize, because the affinity of a couple does not depend only on how you sleep. "Small tricks to find new forms or unexpected places of intimacy can stimulate the couple relationship" writes Bortolotti. "The important thing is to always communicate your thoughts to your partner. The child cannot and must not have the responsibility of two parents who do not communicate or that project repressed or unexpressed needs onto him ".

Read also: How to go from bed to bed in three weeks TAG:
Sleeping baby: short guide to bedtime ❯

7 good reasons to send your children to bed

Classical music lullabies for children: the 17 most beautiful

The sleeping bag with feet and sleeves, for warm and well-covered sleep

add a comment of Sleeping children: seven myths about co-sleeping