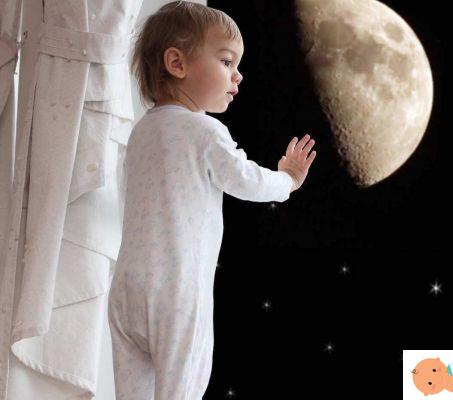 Sleepwalking: what it is and why it occurs

The term sonnambulismo it means 'walking in sleep': it is not a disease, but a phenomenon that can happen at any age, even if it is more frequent in pediatric and pubertal age. There is no need for therapy and nothing needs to be done, if not to ensure that the child does not get hurt. Also because most of the time the episodes tend to thin out or disappear by themselves.

"Sleepwalking is considered a parasomnia, that is one of the phenomena related to sonno, such as speaking during the sleep, bruxism (ie grinding of teeth), or pavor nocturnus, "he explains Federico Vigevano, Director of the Department of Neuroscience at the Bambino Gesù Pediatric Hospital in the city:

"It can occur at any age, although onset occurs more frequently in the pediatric age. A genetic predisposition is often found, so it happens that multiple members within the same family are affected. If all parasomnia in general affect 5% of the population, sleepwalking is much less frequent and can affect about 0,5 ".

Babies: 13 tips to put them to bed easily

Always go to bed at the same time and never after 8.30, at least for the entire period of elementary school, draw a chart with the sleep routine, turn off the television and cell phone ... These and ...

Read also: The importance of sleep in children: 8 things to know

How sleepwalking manifests itself

Il sonnambulismo it arises in the deepest sleep phase, therefore about an hour and a quarter after falling asleep. It is characterized by an apparent awakening, whereby the subject sits up, gets out of bed and moves around the room.

"If it is about his environment, which he therefore knows well, the child moves appropriately" he highlights Federico Vigevano: "not infrequently he leaves the room, turns on the lights and, if the house is arranged on several levels, he can also go down the stairs, and then go back to bed as he got up.

All while continuing to sleep peacefully, since it is in a phase of Deep sleep. That is why he does not respond if his parents call him and does not wake up, unless he bumps into something and gets hurt, which can happen if he is in a new environment, such as in a hotel room, where he has not. time to memorize the arrangement of spaces. In the morning, the child has no memory of what happened. "

Read also: Bruxism in the child: when he grinds his teeth in his sleep

The causes of sleepwalking

Contrary to what was once believed, there are no psychological or psychiatric problems at the basis of sleepwalking, but there is an encounter between genetic predisposition and some triggers that can disturb sleep: the episodes can happen for example if the child is particularly tired, if he has changed bed, if he has fever and takes an antipyretic drug, which can interfere with sleep.

On the other hand, there is no correlation with stressful events, which usually tend to cause difficulty falling asleep and a lighter sleep. For the rest, sleepwalking should not be considered a disease, but a phenomenon that can happen to everyone, even once in a lifetime.

Read also: Night panic in children: what pavor nocturnus is and how it manifests itself

How to behave? Keep calm

Seeing a sleepwalker can be a little creepy instead the best attitude is to stay calm: if the legend according to which waking a sleepwalker could be dangerous is completely without foundation, it is also true that there is no need to wake him upunless you realize he could get hurt - at most you can just follow him until he gets back to bed. Precisely because it is not a disease, sleepwalking should not be treated, nor should it be inhibited, but only supervised.

Better to talk to the pediatrician

"Even if it is not a disease, it is always worth reporting the phenomenon to the pediatrician, to distinguish in a certain way the parasomnia from other less clear phenomena, such as epileptic seizures "advises the expert." It is good to describe in detail the behavior of the child and the time at which the episode occurs or, even better, to film what happens with the mobile phone, so the pediatrician can better frame the situation ".

Sleepwalking is defined as a sleep disorder and typically occurs within 2 hours of falling asleep.

Why is a person sleepwalking?

The causes of sleepwalking can be varied: sound or light stimulations during sleep, irregular sleep-wake rhythms, alcohol and / or drug abuse, fever, psychological distress and stress.

What to do in case of sleepwalking?

The precautions to be implemented therefore include blocking the windows and removing potentially dangerous objects. It is very important not to lock sleepwalkers in their room, especially children.

TAG:
Sleep, 9 Positions That Affect Health (And What They Mean) ❯