Smartphones and children, tips for intelligent and creative use 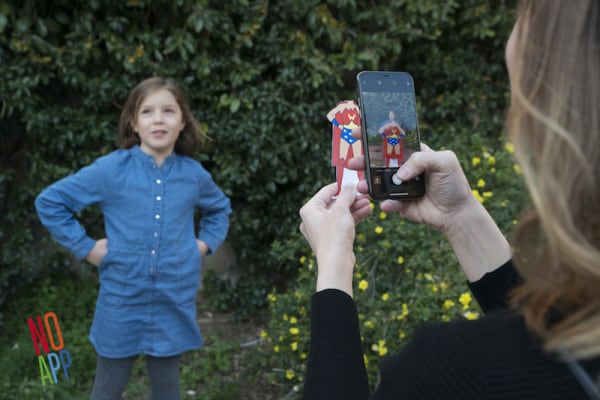 Smartphone? They are not always to blame when it comes to children. On the contrary. The book No App (Lapis Edizioni), created by Daniela Bassi, is a guide for children aged eight and over on the creative and intelligent use of smartphones. The text explains how an alternative use of the mobile phone is possible: if used correctly and with a lot of creativity, technology can be fun and even educational. We interviewed the writer Daniela Bassi, an employee of the Museum Explore of the city and mom, who told us in detail what the objectives of her original book are, pointing out some fun activities to do with the little ones. What is needed? Only a smartphone!


YOU MAY INTEREST: Children and smartphones, tips for correct use

The smartphone as an educational tool

Daniela explains that the idea for the book was born while she was thinking about her childhood: because of her family's choice, there were few toys in the house, but there were, however, many materials such as glue, paper, colors. «Thinking back to the games of when I was a child, I had the idea of ​​using the telephone as a material that can take many different forms. I began to think that the smartphone could be used to project images or to tell a story through audio. So I also began to write down the ideas that came to me to use technology in a simple and, at the same time, creative way ".


Daniela's thinking is in line with the "tinkering", which is a didactic approach born in San Francisco at the" Exploratorium ", the science museum, where the method - tinkering - is proposed, according to which it is necessary to understand a phenomenon by verifying things directly, also by doing manual experiments. tinkering the child must understand while acting.

«My book also has a brief introduction made by one of the directors of the" Exploratorium "of S. Francisco: in this it is written that the approach of No app, in line with the" tinkering ", reconnects the mind and the hands to the digital instrument and places not apps or technology at the center of the activities that are done with the phone, but the child himself ".

The various creative ways to use the smartphone: a flashlight, a projector, a light table ...

The book describes various activities to do as a family with your smartphone or tablet. «The activities to do in the dark are very fun: for example, the smartphone has an excellent one torch point-like. You can make small holes on a sheet and place the flashlight in front to project them on the ceiling: they will be so funny constellations. Or it is possible to roll up a sheet of paper and then place the torch aligning it to the trunk of the tube: thus a "laser sword". You can too trace a drawing that appears on the tablet screen: you just need to put a sheet of paper on top of the monitor and use a soft pencil, thus tracing the chosen image ».

“There are also many mentioned in the book artists, interviewed by me and whose activity was in line with my proposals. For example, a fun game suggested by an Israeli artist is the following: cover the tablet with a transparent panel (which you can buy for one euro from Ikea), turn off the light, increase the brightness of the tablet (or phone) and pour a little salt or sand on the lid. Children, by moving the sand with their finger, obtain backlit images of great impact, which can also be photographed or filmed with another smartphone ».

«There is an activity that children like very much, as has been experimented in some workshops set up at the Triennale in our city, where the little ones were asked to work on the" selfie ", intended as a portrait of the child himself. To achieve this, half of a drawing was used and the other half a digital image. Specifically, to accomplish this particular Selfie you must first make a video with the smartphone in the middle of the face (for example only the mouth area), then you must put the mobile phone on the white sheet, on which the upper part of the face is represented with a drawing. Thus the child thus has a self-portrait that mixes different means of communication: drawing and video. You can also play and see your portrait come to life, ”says the writer.

Can too much technology harm children?

According to Daniela it is important to educate to use the telephone that is critical, creative, positive and active. In fact, there is a lot of difference between banning the smartphone and instead proposing a different use of digital technology in the family and at school.

«With this book we want to propose to get out of the predefined paths of the game apps: we suggest putting the phone in airplane mode and giving the children a goal. I'll give a concrete example: the French artist Jean Julienn has many followers on Instagram, but he has never published an image of his face and among his works he has many examples of the use of the transversal telephone, with the use of thought " out of the box ". We were inspired by this artist, who is present in the book, and we invite you to do an activity proposed by him. Julienn takes a sheet of paper and draws a picture of a character who is on the train; later he makes a hole in the window of the drawn train. Julienn himself is on a train: he puts the sheet with the character in front of the real window and, afterwards, frames it with the camera. Behind the hole is the real landscape that flows quickly. The effect is "animation". Incredible, isn't it? '

«We were also inspired by a photographer who made war reports in Libya with his smartphone, thus entering the famous photo agency" Magnum ": I interviewed him to ask him if it was possible to take beautiful photos with the phone. He replied: "Of course, what matters is not the car, but the person". I tell this to say that this also applies to children: we must not abandon them with their phone, but offer them activities, obviously also to be done in a group, and a goal. Even the Miur has proposed a decalogue to educate digitally ».

READ ALSO: Children and early use of smartphones and tablets, 10 recommendations and risks

Did you practice the various ideas with the children before making the text?

“Yes, I have been lucky enough to work at the city's Explora children's museum since it opened. I asked the director to be able to test the activities with the children on campus. I saw that some of them amused them a lot, also because the little ones are naturally inclined to use digital tools. I also experimented with my children », clarifies Daniela.

“Phones are great audio recorders - we take out apps and use the phone without them. By recording, we can make, with children, a mapping, for example, of the sounds of the house, then hear them again and stimulate the little ones to think about what they remember, thus establishing analogies (e.g. tap water looks like falling rain , a waterfall, etc.). Or you can put the ringtone and hide the phone, inviting children to find it: this game seems trivial, but it is not at all. Finally, you can record the child reading and then listen to the audio together ».

To find out more about the book, go to the Lapis Edizioni Facebook page

TAG:
Fetal suffering: when it happens and how to intervene ❯

add a comment of Smartphones and children, tips for intelligent and creative use