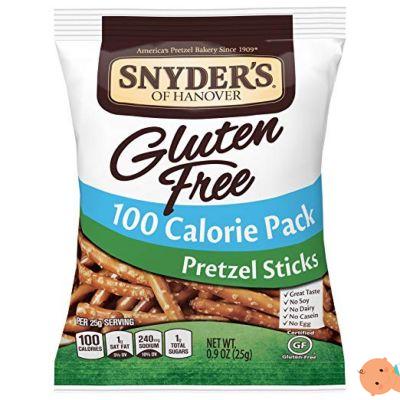 La snack it's a important grass for all children, because it breaks the long break between lunch and dinner and provides the energy to face the afternoons of various homework and extracurricular activities. This is why it should be chosen with care, to give children the right amount of nutrients and the right sprint.
Even greater attention must be paid if the child is celiac. In fact, celiac subjects have one genetic predisposition to produce antibodies against the gluten, a substance contained in cereals such as wheat, rye, barley, spelled, which in celiacs trigger chronic inflammation of the intestine. An inflammation that can cause various ailments, such as abdominal pain or diarrhea, but above all a bad absorption of food, with consequent weight loss, growth retardation and nutritional deficiencies.

Read also: Children's nutrition: the importance of 5 meals a day

The cure for celiac disease consists simply of following an exclusion diet, avoiding it all cereals containing gluten, such as pasta or wheat bread. This does not mean that the child will have to give up certain foods, but that he will have to opt for gluten free versions, for example pasta and bread with buckwheat flour, breadsticks or crackers with corn flour or naturally gluten-free cereals, such as rice. Not only that: even in the preparation of food, it will be necessary to avoid any contamination with foods containing gluten, cooking your dishes in different dishes and using different cutlery. By strictly following the gluten free diet, the child will be able to have a state of health comparable to that of his non-celiac peers and lead a life very similar to others.

How to choose a snack for the celiac child

What to feed a celiac child for a snack? You can choose between home preparations, made with the same care taken for other meals, or industrial preparationsFortunately, for some years there are so many gluten-free proposals on the market, made with rice, corn, maize, buckwheat, amaranth, quinoa and other gluten-free cereals. Their safety is guaranteed by the wording "gluten free" which must be clearly shown on the package and which certifies both the absence of ingredients containing gluten and the absence of the danger of contamination.

A complete snack from a nutritional point of view it should include, without exaggerating the portions, the main categories of macronutrients, so ok for a food based on carbohydrates, such as bread, bread sticks, croutons, gluten-free crackers, with a protein food, such as cold cuts or cheeses. And to top it all off, there is nothing better than a fruit or a fruit juice, which are naturally gluten-free and provide valuable substances, such as fiber, vitamins and mineral salts. There are also packaged products that already contain a combination of foods that provide the various nutrients, so they represent a practical and appetizing solution to take to the playground, to the gym or to school. To make balanced, energetic and tasty snacks and to spend peaceful and carefree afternoons.