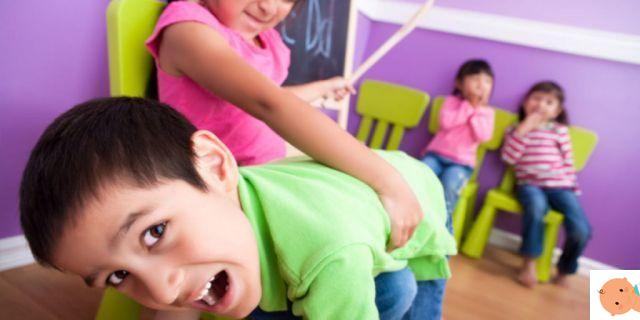 Spanking or not spanking? This is the dilemma at the heart of the debate of parents, pediatricians, educators and psychologists.

Many parents use spanking - hitting a child on the butt with an open hand - as a disciplinary method, but many experts, on the other hand, argue that it is a harmful practice and that it can cause serious behavioral damage. But other scientists reply that spanking has so many variables and it is not possible to draw a single conclusion as to whether it is good or bad.

Read also: Spanking, 10 reasons why it is better to do without it

Now a group of researchers has tried to answer the question with a meta-analysis: that is, by summarizing and analyzing the data of many and different researches on the subject.

Researchers Elizabeth Gershoff and Andrew Grogan-Kaylor of the University of Austin, Texas and the University of Michigan, respectively, examined 75 studies on the relationship between parental spanking and children's behavioral, emotional, cognitive and physical outcomes. . The result is that spanking has a negative effect with a score of 13 out of 17.

According to the meta-analysis, spanking can cause aggression, mental and behavioral health problems, as well as impaired cognition and low self-esteem.

Let him play as much as possible, praise his commitment, create happy memories and when he is sad help him to accept the negative emotion. And don't forget to cultivate ...

This analysis was not simply an attempt to summarize previous studies, but Gershoff and Grogan-Kaylor also wanted to investigate two aspects related to spanking.


The first aspect was to evaluate the effects not only of spanking, but of physical punishment in general, as physical punishment can include ways such as hitting children with objects, pinching them, or even biting, far more serious than a spanking.


The second problem is that many published studies are cross-cutting, which means that they evaluate the effects of spanking by collecting data at a specific point in time, making it difficult determine if there is a relationship between cause and effect. For example, a cross-sectional study could show that 10-year-olds who are spanked by their parents are more aggressive than docile ones. But the spanking could also be the effect: Aggressive children are spanked more than docile ones ...

To address these two problems, Gershoff and Grogan-Kaylor did several things.

First, they limit their meta-analysis to studies that evaluate only the effects of spanking, slapping, and hitting, but without the use of objects. But even by eliminating the most aggressive punitive practices, spanking and slapping were found to have negative consequences for children.

Then, to overcome the second problem, the researchers compared the results of cross-sectional studies with the results of longitudinal studies, which track children's behavior over time so that cause and effect relationships could be analyzed.

E Again, Gershoff and Grogan-Kaylor found that spanking has negative effects, which reinforces the contention that spanking poses risks for children.

But despite everything, some researchers remain skeptical.

First, while the new analysis made an attempt to separate the effects of spanking from those of harsher physical punishment, the research itself has shown that many spanking parents also use other forms of physical punishment and therefore "can not isolate the spanking "explains Christopher Ferguson, a psychologist at Stetson University in Florida. In other words, the negative effects associated with spanking could still be derived in part from the parents' use of other, more violent forms of discipline.

The new analysis also considered slaps and blows to other parts of the body (not to the butt) as synonyms of spanking, but these actions could have distinct effects instead.

Some researchers also suggest that the effects of spanking vary for different reasons that prompt a parent to spank, how often they do it, and how old the child is at the time of the spanking. Without these variables to say that spanking is inherently dangerous might be too simplistic. "I think it's irresponsible to make definitive statements about the harms of spanking," explains Ferguson.

Furthermore, the cause-and-effect problem remains: are children spanked for misbehaving or misbehaving because spanked? Or both?
In fact, even longitudinal studies do not completely solve the problem, because behavioral problems can worsen over time regardless of the effects of the spanking.

Still, a number of studies have found an association between spanking and the child's negative behavior, including by analyzing the child's pre-existing behavior.

In conclusion, according to Gershoff, although the debate remains heated, it is safer for parents to avoid spanking their children.

Read also: How to get children to obey without screaming (and why it's better)

And while Ferguson isn't convinced that spanking is categorically bad, he too says he is "certainly not a proponent of spanking."
Furthermore, most studies show that parents who spank are the ones most inclined to use harsher forms of punishment. "The worrying thing is that if the spanking parents see that if the spanking doesn't work (and it tends not to work) they increase the punishment level, with serious risks for the growth of the children." conclude Gershoff.

TAG:
Spanking, 10 reasons why it is better to do without it (according to science) ❯

add a comment of Spanked yes or no? Science answers