Spas in pregnancy: when you can go and what you can do 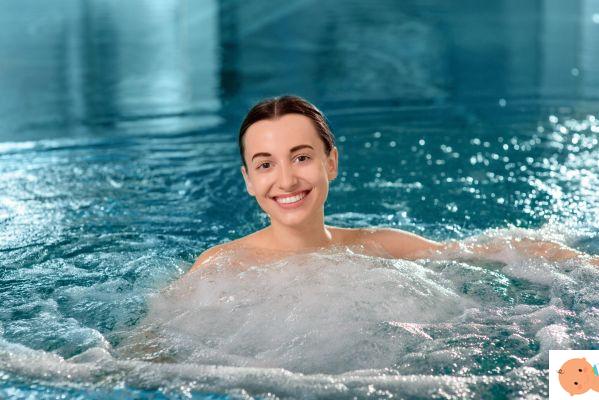 Thermal baths, a place of treatment and relaxation

The baths: by now they have become synonymous with relaxation and relaxation, a "moment all to oneself", also thanks to the multiplication of wellness packages that can include massages and beauty treatments. First of all, though, I'm a place of care, thanks to the beneficial properties of the thermal waters, useful for ailments and diseases of the skin, respiratory tract, digestive system, bones and joints. And also for the minor ailments of pregnancy, from constipation to digestive to circulatory problems.

Spas for children: 28 destinations in the country and in Europe

Sea? The needle? Countryside? Mountain? If the destination is the spa, which one to choose? Because at the thermal baths to the beneficial effects on typical ailments of early childhood (colds ...

Spas in pregnancy: some precautions are needed

In any case, whether it is relaxing or treating more or less serious ailments, spas during pregnancy they are not to be taken too lightly: in order for courses and treatments to be carried out in complete safety, a few simple precautions must be followed. Let's see what the risks of expecting spas could be and how to prevent them.

Beware of the heat

Whether they are collected in tubs, pools or whirlpools, the main point of the question is that they tend to be the thermal waters are warm. And too hot in pregnancy could have serious consequences.

Spas in the first trimester of pregnancy

In fact, there aren't many solid studies on the subject, but those that do suggest that the careless use of hot baths - for example with temperatures that are too high or for too long - in the first trimester of pregnancy can increase the risk of developmental defects in the fetus, such as neural tube or abdominal wall defects. Results still poor, therefore, but congruent with those of studies conducted on animals or referred to women who had severe fevers in the first trimester.

That's not all: "The heat has a strong vasodilating action, which causes a decrease in pressure, which in turn can lead to fainting "explains Cristiano Crotti, expert in medical hydrology at the Center for Medical Bioclimatology and Thermal Medicine of the University of our city." If a woman is already in a condition of low pressure (hypotension) therefore, spas are contraindicated. "In this regard, it is worth noting that, often, during the first trimester of pregnancy, blood pressure tends to be lower than usual, and this even in women who even later develop hypertension.

What can be done, with some caution

All this does not mean that the spas should be avoided, but simply that you have to go there taking some minimal precautions, and maybe avoiding "heavier" treatments (such as sauna and turkish bath). Obviously, these general advice are for expectant mothers who are experiencing a "normal" pregnancy, that is, without any particular medical problems. "If there are any complications or for any reason the pregnancy is at risk, the first thing to do is to consult your doctor, who will evaluate the situation and give specific advice, case by case "explains Valentina, a freelance gynecologist, expert in high-risk pregnancies. So what to do?

These indications concern both the first quarter and the others. "If you follow these rules there shouldn't be any particular risks" specifies the expert. Moreover, many restrictions relating to the first weeks of pregnancy do not concern real and documented risks: more simply, since it is a very delicate moment both for the risk of abortion and for malformations, it is preferred to avoid setting up situations that could be called into question, perhaps even without a real reason, if problems arise.

Finally, Crotti points out that these are general, valid indications both for those who go to the spa once in a while, just to indulge in a relaxing break, and those who instead follow real therapeutic paths.

There are those who feel at their best during pregnancy and those who find it difficult to endure all the changes that the new state entails. How do you feel? Take a cue from our ...

The benefits of spas in pregnancy

But what advantages can attending a spa during pregnancy give, beyond the fact of spending a relaxing and enjoyable day? "In some cases, the benefits are not related to the pregnancy itself, but to other conditions that do not depend on the fact of expecting a baby" explains Crotti. For example, we know very well how the inhalation therapies may help in the case of chronic respiratory tract infections. "It is valid in general and is valid for the pregnant woman, who can follow these therapies without problems".

The thermal waters, however, can also lend a hand in the treatment of some ailments associated with pregnancy itself. "Let's take digestive difficulties, constipation, water retention, which can cause swelling in the legs: in these cases, the hydropinic therapy, that is, the simple fact of drinking thermal waters. For example, a water very rich in magnesium tends to improve intestinal transit, with positive effects on constipation "says Crotti.

It will be the doctor - the gynecologist if he also has specific knowledge in this area, or the thermal doctor - to advise which thermal water is the most suitable to drink.

"Indeed - continues the expert - some studies suggest that hydropinic therapy can improve blood glucose control in women with gestational diabetes. Obviously it should not be used alone, but as part of an adequate therapy and diet set by the gynecologist and the diabetologist ".

Other benefits of spas may relate to cases of moderate hypertension (pressure a little higher than normal), because as we have seen, hot water has a vasodilating effect, which tends to lower the pressure. "In general, it improves peripheral circulation, relieving swelling of the feet and legs", emphasizes Crotti. Which in this regard recommends in particular the so-called Kneipp paths, which provide for the alternation of tubs with jets of hot water (attention: it must always be around 38 ° C!) and cold water, in which you walk immersing yourself generally only up to mid-thigh. "By improving lymphatic and blood circulation, this path should also reduce the risk of blemishes related to broken capillaries on the legs".

Finally, there would be the classic walk in a thermal pool, to improve posture and alleviate any back pain, lightening the weight that weighs on the spine as the belly grows. "It is a very simple exercise: just walk, immersed up to the chin, along the edge of the pool, as long as the water does not have too hot" explains Crotti. "It can also be done in a normal swimming pool, but in the thermal one there is the advantage of breathing the gases released by the water itself, and which typically in Del Paese are sulphurous gases - with an anti-inflammatory action and freeing the airways - and salsobromoiodic, rich in calcium which helps muscle relaxation and peripheral circulation ".

Are you expecting a baby? Drink a lot!


Drinking water is very important, especially during pregnancy. "A good level of hydration, by increasing the fluids in the circulation, also increases the resistance of the blood vessels, and this improves circulation" explains Cristiano Crotti, expert in medical hydrology. Not only: drinking a lot makes you pee a lot, which can be uncomfortable but also a big plus. "This way the urinary tract is kept cleaner and the risk of infections decreases."
But what water to drink? Unless there are particular pathologies, there are no stringent indications. Crotti, however, remembers that some mineral waters can help alleviate certain small annoyances of pregnancy: for example, waters rich in magnesium are suitable for constipation while those rich in calcium bicarbonate are for heartburn.

At the spa, however, there are not only thermal waters. There can be therapeutic muds and treatments - therapeutic or wellness - based on saunas and Turkish baths. And here the situation becomes even more delicate.

As regards the mud, total body ones are definitely not recommended, because affecting the whole body would cause the temperature to rise too much. "At the most, if there are particular medical indications, so-called drawer muds can be done, which concern one or more parts of the body - the ankle, the elbow, the knee - to be treated separately" Crotti points out.

On the other hand, aesthetic ones should be avoided. "Both because they tend to cover the whole body and because they often use additional substances such as essential oils or herbal extracts, which could reach the fetus" she specifies. "On the other hand, it doesn't make much sense to do a slimming treatment with sludge during pregnancy".

Saunas and Turkish baths should also be avoided, because in this case the temperatures used are really high. Not surprisingly, this is the general indication provided by the British health service, the National Health Service: "There are few studies relating to the safety of a sauna or bathroom during pregnancy, but it would be better to avoid, because they expose you to the risk of overheating, dehydration. and fainting ".

"Of course - Crotti specifies - in some circumstances they could be useful: for example the Turkish bath is very effective in case of respiratory tract disease, but it is worthwhile, in pregnancy, to evaluate the alternatives first. In any case, it should always be done according to very specific indications. We usually alternate between sauna and Turkish bath until it's time to leave and then quickly leave. Nothing could be more wrong: you should only do one of the two, for 8-10 minutes, then take a shower, cover yourself with a warm bathrobe and rest lying down for 15-20 minutes. In any case, for sure I would not recommend this as a general relaxation strategy: if this is the purpose, better a bath in the thermal pool or an emotional shower ".

The same goes for the salt rooms, for which there are even fewer studios available. "If it comes to doing it occasionally, probably nothing happens, but it doesn't even make sense to do it. Again, the swimming pool or the emotional shower is better. For continuous therapies, however, it would be better to be cautious, because in case of dysfunction - perhaps not known - of the thyroid or other glands the effect could be negative"concludes Crotti.

And the aesthetic treatments? It depends

Even for aesthetic treatments - for example massages with essential oils or special creams - some caution must be exercised. "The problem is precisely the substances applied, because they may not be safe in pregnancy, and especially in the first trimester, when the baby's organs are forming," she stresses. "Consequently, if we don't know exactly what it is and we are not certain that whatever it is has no effect on the fetus, it is best to avoid it."

Ditto for the herbal teas that are often served in many spas or spas, perhaps made with spontaneous herbs of the place (it can happen in certain mountain structures). Clearly a few sips of herbal tea drunk once during pregnancy can hardly cause major problems, but if the use is more routine, better to take it easy. "If we don't know for sure what's inside, it's better to limit ourselves to water," she concludes.

TAG:
Baby thermometer: which one to choose ❯

add a comment of Spas in pregnancy: when you can go and what you can do