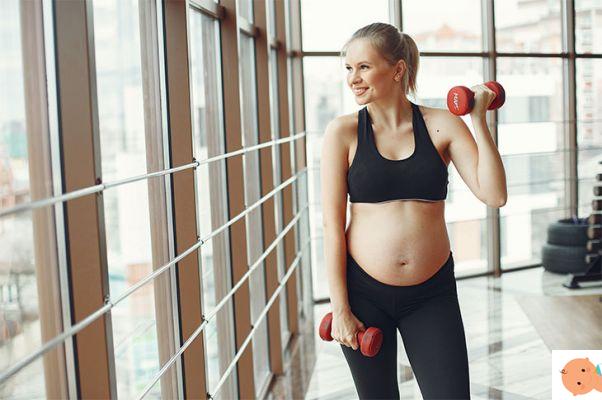 All sports are good except those that have a high risk of falling or that involve hand-to-hand contact which could lead to very dangerous trauma to the abdomen. I'm...

During pregnancy "all sports activities are fine, except those that involve a high risk of falling or involving body-to-body contacts, which could cause trauma to the abdomen, even very dangerous, especially from the moment in which the uterus, with the growth of the fetus, rises towards the abdomen and is no longer protected by the pelvis. " explains the gynecologist Rossana.

Read also: sports, what can be done and what not in the third quarter

“Sports that involve running or jumping are also not recommended, which can increase uterine contractility. Therefore, no jogging, skiing, horseback riding, fencing, just as all competitive activities and matches of all kinds must be avoided, where the risk of impact with other players is high ".

The question: can you do abdominals during pregnancy?

"The abdominals can be done as long as the belly allows it, and that is up to about the 23-25th week - says the gynecologist Rossana - after it becomes practically impossible, both because the belly hinders the execution of the exercises, and because the mother does not she is able to lie on her back since the weight of the fetus can compress the vena cava and cause a drop in pressure.

In any case if during the execution of the abdominals you feel a hardening of the belly it is advisable to stop (also for this reason gymnastics during pregnancy should always be done under the guidance of an instructor).

"And then we need to make a distinction between women who already played sports before getting pregnant and those who have never practiced no physical activity ”adds personal trainer Viviana Ghizzardi. “The former, if there are no contraindications on the part of the gynecologist, can continue their activity, albeit at a slower pace and avoiding risky situations.

For the latter, it is not advisable to start a new sport during pregnancy, because this is not the time to learn techniques never learned. More correctly you can practice a physical activity, choosing something pleasant, that you already know how to do or easy to learn, such as water aerobics or yoga, which very often offer specific courses for future mothers ".

For example, those who have always played tennis can continue, naturally avoiding jumps or jumps, those who dance as a child can dance again, because they know how to move and have already trained muscles, but those who have never ridden a bike cannot expect to learn at all. now!

Having said that, browse the photo gallery above with the most recommended sports during the nine months and why. We talk about water aerobics and swimming, cycling, free body gymnastics and weights in the gym, stretching, yoga, pilates and belly dancing

Aqua aerobics and swimming during pregnancy

Water activities are the most suitable while waiting, since they have 'zero impact on the body', since water relieves the weight of the belly, eliminates the risk of trauma, promotes movement and facilitates venous return. And they can always be practiced, from the first to the last weeks, especially if, as often happens, the pool organizes specific preparatory courses. As for swimming, however, it's fine if you already know the styles, otherwise it's better to leave it alone as you risk accentuating lumbar or cervical lordosis, causing pain along the spine.

Both the classic bike - as long as you know how to go well and choose cycle paths and not busy roads or bumpy paths - both the home exercise bike, and spinning in the water, which combines the benefits of pedaling with the benefit of water activity. “It is an aerobic sport, which strengthens the cardiovascular system, trains the breath and stimulates the plantar pump to push the blood upwards” comments Viviana Ghizzardi. "However, it is better to avoid it at the end of pregnancy, when the weight of the belly, in addition to unbalancing and risking to alter the balance, prevents keeping the legs in axis, overloading the joints of the hips and knees".

Bodyweight gymnastics and weights in the gym

It is a global activity, as it allows you to train various muscle groups. "Generally there is an initial warm-up phase - treadmill with brisk walk or stationary bike - a toning phase, with free body exercises or with the help of machinery, and a final phase of muscle relaxation" explains the personal trainer. “Excellent during pregnancy because the activity can be modulated according to one's needs, the degree of training and the gestational period; moreover, if you use the machines, you can choose the ones best suited to your condition, varying the weights to customize the intensity of the exercise ".

"It consists of a series of stretching and lengthening exercises, particularly useful in pregnancy to improve joint flexibility and muscle elasticity, in order to prevent painful contractures or muscle-tendon trauma" highlights Ghizzardi. “Also excellent for promoting venous circulation, relieving tension and giving a general sense of relaxation. For a complete workout, it is advisable not to do it alone, but as a complement to muscle toning work ".

As a physical activity it is comparable to stretching, plus yoga pays particular attention to listening to the body, meditation and breathing, important elements for getting in touch with the child, managing one's anxieties and obtaining a deep inner well-being. Knowing how to perceive the body also allows you to participate more actively in childbirth, pushing more effectively and consciously to facilitate the birth of the baby. Read also: Laughter yoga in pregnancy

It is a form of rehabilitation gymnastics - free body and with the help of special machines - which helps to acquire awareness and control of one's own movements and of the muscles involved in the movements. Particularly useful in pregnancy because the exercises can be graduated according to the specific needs of the woman, focusing on the postural muscles and in general on the muscle groups most involved in the transformations of the nine months.

More and more 'popular' among future mothers, it could be defined the dance ad hoc for pregnancy, since its movements are excellent for mobilizing the spine and pelvis and strengthening 'strategic' pregnancy muscles, such as the perineal muscles, the abdominals. , the pectorals, also giving a nice posture and greater ease, even with the belly.

add a comment of Sports in pregnancy, which ones to avoid and which ones recommended