Spots on the face in pregnancy 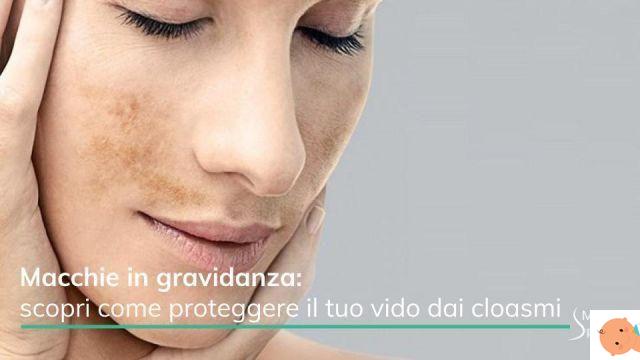 Spots on the face in pregnancy

The 'official' name of the spots on the face in pregnancy is chloasma gravidarum. The typical site of their appearance is the face, with a symmetrical and bilateral arrangement on the nose and cheeks, which also earned them the 'nice' name of pregnancy mask.

Why do the spots on the face in pregnancy come

On the one hand there is a genetic predisposition, which sees women with darker complexions as 'favored', on the other hand there is a correlation with the hormonal modifications of pregnancy, "so at a certain point, for no reason not yet very clear, the melanocyte cells 'go crazy' and begin to produce more melanin in certain areas - says Angelo Marzano, Adjunct Professor at the School of Specialization in Dermatology and Venereology at the University of our city -. is that exposure to the sun can be an important trigger, because it stimulates even more the accumulation of melanin, which is the same substance that also produces a tan ".

How to prevent the appearance of spots in pregnancy

Not being able to act on either the genetic or the hormonal component, it is mainly on exposure to the sun that most of the prevention of pregnancy chloasma is played.

For this year, no 'sunbathing': the tan must always be taken in moderation and always adequately shielded with a cream with very high protection, well aware, however, that no cream is able to shield us 100% from UV rays and even if it is we spread a whole tube of it we cannot stay under the sun for 8 hours straight!

A cream with sunscreens should also be applied in winter, especially if you have a dark phototype and spots appeared before pregnancy that made us presage that we were predisposed to imperfection.

"There are no other prevention rules, just as there are no really effective creams to lighten those that begin to appear - says Marzano - only on a preventive level, it can be useful to apply cosmetics containing vitamin C, kojic acid, phytic acid, arbutin , glycyrrhetic acid, which have a mild depigmenting action as they inhibit tyrosinase, an enzyme that contributes to the synthesis of melanin.

To eliminate the superficial melanin and make the complexion more homogeneous, once a week it is good practice to clean the face with an exfoliating product, to massage for a couple of minutes on clean and moistened skin and rinse with warm water ".

How to erase blemishes on the face

Immediately after the birth, the hormonal fluctuations of the nine months disappear and often the spots that may have appeared tend to diminish or even disappear. However, if even after the end of breastfeeding the imperfection is still evident, how to 'erase it'?

"Let's say right away that blemishes, whether caused by chloasma or melasma, are one of the most difficult imperfections to solve", replies the dermatologist, "and even with medical treatments it is not possible to be sure of eliminating them permanently". But you can try. All lightening treatments can only be performed during the winter months, as they are not compatible with sun exposure.

These are treatments prescribed by the dermatologist and prepared in pharmacies based on azelaic acid, retinoic acid, hydroquinone, which have a marked depigmenting action. Instead, it is useless to apply simple cosmetics, which have only a superficial action.

They use cocktails of substances that induce a marked desquamation of the superficial layers of the skin, which eliminates the part of the stained skin and stimulates cell renewal. They can only be performed by the dermatologist or aesthetic doctor.

It emits a light wave that hits the dark pigment. "Better to avoid it, because, if used improperly, it could even worsen the imperfection, especially on dark skin, with permanent damage" says the dermatologist.

La dark line on the belly is the linea nigra, sometimes called the pregnancy line. About 80% of pregnant women will notice the formation of a linea nigra that, vertically, crosses the belly from the navel to the groin. It usually appears after the first trimester of pregnancy - around the second trimester of pregnancy, around the twenty-second week of gestation - and is a very common benign condition that disappears a few months after delivery.

Chloasma gravidarum should not be confused with melasma

Often used interchangeably, these are actually two different issues. "Both cause dark spots on the face and both are caused by female hormone production and recognize a genetic predisposition, however they are not the same," says Marzano.

Chloasma gravidarum: only in pregnancy

Chloasma gravidarum is a blemish that can appear only in pregnancy, unlike melasma that can occur at any stage of life, even at a young age. Like chloasma, melasma mainly affects the face, but has a more irregular distribution, it can appear on one side more than on the other, with more intense patches and others less intense.

Risk factors for melasma are represented

Chloasma is related solely to pregnancy.

For both chloasma and melasma a trigger risk factor is exposure to UV rays, which stresses the melanocyte system and determines an accumulation of melanin.

Finally, perhaps more importantly, while chloasma, being linked to hormonal variations of the nine months, has a good chance of self-resolving after childbirth, melasma is extremely resistant, and so it can happen that it forms in summer, fades in winter. when UV stress decreases, but stubbornly reappears in summer.

Pregnancy: in the sun without problems

TAG:
Fetal macrosomia: what to do if the fetus is large ❯

add a comment of Spots on the face in pregnancy