Stillbirth: how to deal with perinatal bereavement 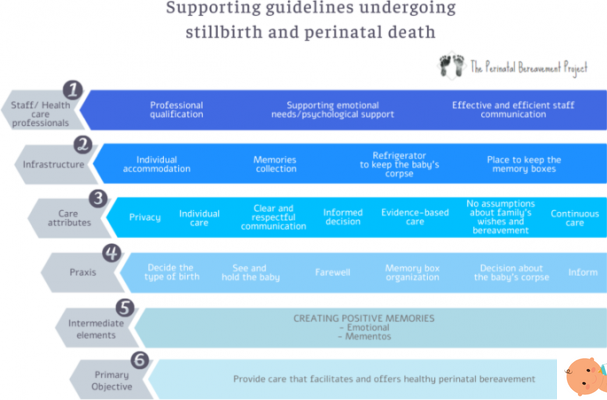 Almost four babies in the third trimester of pregnancy die every day before they are born. «According to the latest estimates, it is a striking phenomenon 1.400 children a year in the country: 0,29% of total births in our country (473.438 in 2022). A stable figure over the last ten years, which is in line with the European average "explains Dr. Claudia Ravaldi, psychiatrist and psychotherapist, founder and president of the CiaoLapo Onlus association, created for the protection of pregnancy, perinatal health and for support in the case of stillbirth.

Of these deaths, half (700) occur without a known cause: the unborn child and the pregnant woman appear healthy, without predictive risk factors, and are included in a normal birth path envisaged by the National Health System.

How to deal with the perinatal bereavement?

What is meant by "perinatal death"


The World Health Organization defines one "Perinatal death" the one that occurs between the twenty-eighth week of pregnancy and seven days after giving birth.
La "Prenatal death" on the other hand, it concerns those that occurred during gestation.
"A formal difference that has no psychological implications: perinatal bereavement, in fact, is experienced with specific and defined signs and symptoms, independent of the gestational age and the causes that led to death" reads an article written by the experts Claudia Ravaldi and Carmen Rizzelli.

1. Before and during pregnancy

"All women of childbearing age should be properly informed and know, even before becoming pregnant, that unfortunately, despite the adoption of healthy behaviors, there is always a small amount of risk that negative events occur, which cannot be foreseen. It would be necessary to help young women and boys starting from education in high school, both to talk about prevention, but also to accept these eventualities »explains Ravaldi.

"When an event of this type occurs, in fact - continues the expert - have received adequate information before or during pregnancy it helps to face the situation with more tools and to feel less wrong, alone, incapable, unprepared and abandoned by everyone. It is a resource that helps you to seek information and help. We do not suffer less, but it is an important tool in the recovery process ».

Read also: Death in utero: the emotions of a mother for her unborn child

"The death of the child expected at the end of pregnancy is an event that occurs at a time when couples are often less focused on anxieties than pathologies or malformations or in general on the health of the child - explains Carmen Rizzelli, psychologist, psychotherapist, specialized in Psychology of perinatal mourning, of the Pomegranate-Maternity and Birth Information Center, of the city -. It is the phase in which we prepare for the meeting, in which delivery and birth are awaited. In which the parents feel that life is coming together with their child and the realization of what they have imagined and desired ».

For this it comes to a very painful mourning, “A shocking event that causes enormous stress and pain which, unfortunately, cannot be relieved, but must be worked through. The only way to overcome it is to give yourself time, talk about it and feel free to express and feel your pain »adds the founder of Ciao Lapo Onlus.

Here are some tips:

Regional studies have also started in Del Paese, coordinated by the Istituto Superiore di Sanità, to work on these "inexplicable" and "sudden" losses. All with thetarget to lower the number of stillbirths by 20% not related to health complications.

"All over the world, associations such as CiaoLapo are working together with the International StillBirth Alliace project to improve tools to reduce the risk of stillbirth," says Claudia Ravaldi, founder and president of the association. The tools identified are two:

1. Fall asleep on your side
"From the twenty-eighth week of gestation it has been seen that mothers who fall asleep on the side and not supine, reduce the risk of stillbirth because this position allows better oxygenation of the fetus".

2. Learn the baby's habits in the tummy
“It is not true that in the third trimester of pregnancy babies move less because they have less space. The fetuses maintain the same habits and activities as always, it only changes the way we feel them. So it is very important that mothers know their children's habits and monitor them. Last year, thanks to a project to educate women on the habits of their children, in Scotland they managed to halve the number of stillborn children ».

At the end of pregnancy, the death of the child is particularly unexpected and sudden, cruel and experienced as profoundly unjust and senseless. “Death comes when, in most cases, both parents have built one attachment relationship, that is, an emotional relationship with that specific child, unique and irreplaceable for them. With the son they felt moving, which they saw in the ultrasound scans and which they fantasized about together ”explains Carmen Rizzelli, therapist at the Melograno-Centro Informazione Maternità e Nascita.

For this reason, when the pregnancy stops, the loss of the child involves a physiological experience of mourning and pain for his death. «The couple lives one shock it's a trauma very strong, the interruption of the life project and a split in one's identity as parents. They no longer really know who they are. Your life loses its meaning and nothing seems to matter anymore. For parents left with empty arms it is difficult to believe what happened, to be able to accept it and there is a drive to want to go back to when you were pregnant and the child was alive ".

Read also: Therapeutic abortion: this is how it happens and what are the times required by law

One of the most difficult moments to have to face is certainly the return home: «We return to a place that was ready to welcome a new life and which instead remains empty, filled only with our pain».

Here's what to do.

Getting pregnant again? Not now

Another thing that happens often, but which should be avoided, is to immediately try to have another child. "A new pregnancy is not in fact an antidote to grief. Among other things, the potential repercussions of this choice can also be very serious, for the couple but also for the new child - specifies Carmen Rizzelli, psychologist, psychotherapist, specialized in Psychology of perinatal bereavement, of the Pomegranate-Center for Maternity and Birth Information. , of the city -. Given that the bereavement period lasts about one to two years, we ask parents to wait at least 4-6 months before trying to get pregnant again».

“The idea that mourning is cured with another child is wrong, because the lost child is not recovered and we place ourselves in the condition of immediately relive an experience that was traumatic, that of pregnancy, putting a strain on one's ability to withstand emotions, anxiety and stress. Body and psyche in fact need time to be able to begin to go through and process this event: death has been contacted instead of life and life must become fertile again ».

«Before starting again to try to have another child, it is therefore important that the internal representation of the lost child has taken place. In this way, the new child will be able to have a space of his own, without overlapping the image of his brother. Good for the parents, but especially for the new child ».

What do i need to know when becoming pregnant?

All women of childbearing age should be properly informed and know, even before becoming pregnant, that unfortunately, despite the adoption of healthy behaviors, there is always a small amount of risk of negative events occurring, which cannot be predicted. .

What to do when diagnosed with perinatal death?

When receiving the diagnosis it is very important not to be shy, but to feel free to express all emotions, ask questions and requests, without feeling wrong or afraid of exaggerating. It is normal, in fact, to be hungry for security and reassurance.

TAG:
Death in utero: the emotions of a mother for her unborn child ❯

add a comment of Stillbirth: how to deal with perinatal bereavement