Strep throat: EVERYTHING you NEED to know 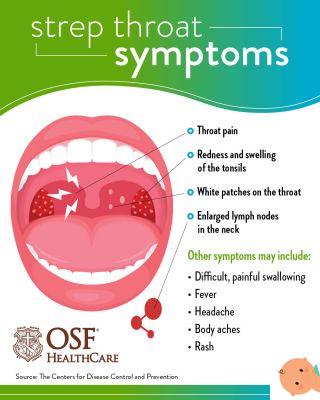 Sore throat and fever: these are symptoms of pharyngitis - or pharyngotonsillitis, if the tonsils are also involved - very common in children.
In the vast majority of cases (70-80%) they are due to viral infections that resolve on their own within a few days. Sometimes, however, they can be caused by bacterial infections and especially from the infamous streptococco pyogenes yougroup A beta hemolytic treptococcus. Here is everything there is to know about this bacterium.

Streptococci are a group of bacteria all characterized by a spherical shape. There are various types, many of which are harmless to humans. Others, on the other hand, may be due to various diseases such as pharyngitis and tonsillitis, ear infections, pneumonia, meningitis, generalized infections (sepsis).


Among these, Streptococcus Pyogenes, or beta-hemolytic streptococcus group A, is the main bacterium that causes pharyngitis and pharyngotonsillitis. "However, it should be specified that in most cases pharyngitis has a viral origin and only in 20-30% of cases can it be caused by this bacterium" he says. Maurizio De Martino, pediatrician and immunologist, director of the Pediatric Clinic 1 of the Meyer Hospital of the city and one of the coordinators of the Del Paesene Guidelines for the management of pharyngotonsylitis in the pediatric age.

Don't think about strep right away every time your child has a sore throat and fever. Statistically, the causes are more likely to be other!

Streptococcal pharyngitis is more common in moles school-age children and adolescents, between five and 15 years of age. More rare instead under three years.

Read also: Fever children, what to do when they get burned

The discussion of symptoms is quite complex. We feel Gian Luigi Marseglia, director of the pediatric clinic of the - Policlinico San Matteo: "Tendentially, streptococcal pharyngotonsillitis is characterized by strong and sudden sore throat, high fever (above 38 ° C), redness of the pharynx and tonsils, presence of small red dots on the soft palate and small plaques on the tonsils, swelling of the glands in the neck, located under the jaws ".

But be careful: plaques can also be present in tonsillitis of viral origin - in particular in adeonovirus infections - or in mononucleosis, so they are certainly not enough alone to diagnose streptococcal infection.

If, on the other hand, the fever tends to be low and other symptoms are also present, such as cold, conjunctivitis, hoarseness or diarrhea, it is extremely likely that the sore throat is caused by viruses and not bacteria.

"Clinical observation is not enough to make the diagnosis: you need a throat swab," he says Marchisio, director of the high-intensity care Pediatrics department of the Polyclinic of our city.

"The guidelines say it clearly," emphasizes the specialist. "Because the symptoms can be similar to those caused by other viruses or bacteria, no doctor, however good, can diagnose strep infection based on symptoms alone."

Obviously, clinical observation is useful for the doctor to understand in which cases it is appropriate to do the swab (not every time there is a sore throat it is necessary to do it!), But it is only the result of this examination that allows us to clarify, and understand whether or not type A streptococcal infection is present.

The tampon, on the other hand, should not be done in asymptomatic children

, that is, who do not have a sore throat and fever. "About 30% of children are asymptomatic carriers of the bacterium" explains De Martino. "So there are children who have strep, and they would test positive, but they don't have to be treated with antibiotics because they don't have an active infection."

Swabing without precise clinical indications - or, worse still, to carpet all children - means finding yourself with positive results that have no clinical significance and risking treating children who would not need them. Among other things, in children who are positive for the swab but asymptomatic, the antibiotic does not, however, allow to eradicate the bacterium present.

Read also: Emergency bacteria resistant, here's how to overcome it

How the tampon is made

The issue of "A scuola di salute", magazine of the Bambin Gesù pediatric hospital, dedicated to streptococcus, explains it well: "The sample must be carried out by vigorously rubbing the swab (similar to a large cotton swab) on the oropharynx and on the surface of both tonsils, avoiding touching other parts of the oral cavity or contaminating it with saliva ".

Many pediatricians have a quick test which allows immediate analysis of the swab, arriving at the outcome (streptococcus yes or no) within five minutes. Pediatricians who do not use this system send the swab to the laboratory for a more in-depth but slower analysis: it takes 48-72 hours for the result.

That fever that never goes away. Could it be strep?


At first you think it's the usual cooling, with fever and sore throat. But the days go by and your baby continues to be tired, inappetent, with dark circles and seems to have lost his usual liveliness. In addition to sore throat, he can also have headaches, legs, stomach and above all he has a little fever (around 37,5 ° C) that does not go away. Could he be strep?

In general, these symptoms are more likely to correspond to aviral infection (or maybe more viral infections one after the other, one after the other) more than a streptococcal infection. "However, as we have seen, clinical observation is not enough for a precise diagnosis" says pediatrician Marchisio. "Even in these cases, the pediatrician may therefore deem it appropriate carry out the swab and, if this is positive, start antibiotic therapy".

How does the infection happen and when can you go back to school?

The infection is transmitted through the respiratory tract by direct contact with secretions from the throat or nose of infected individuals. If the child no longer has a fever and is feeling well, she can go back to kindergarten or school already after 24-36 hours from the start of antibiotic therapy. But it is always advisable to wait a few more days to allow the child to recover better.

Read also: Sick children, when they can go back to school

How to cure streptococcus pharyngitis

If the presence of strep is confirmed by the swab, one should be established antibiotic therapy. The active ingredient of first choice is amoxicillin, to be taken for 10 days according to the indications of the Guidelines. "Attention - De Martino warns - the therapy must be terminated even if the symptoms improve already after the first two or three days. This is because only with 10 days of therapy it is possible to eradicate the bacterium".

If, on the other hand, the pharyngitis is caused by a viral infection, no treatment is needed because it heals on its own.

In the vast majority of cases strep throat has a benign course, even if it is not treated. However, if it is neglected (therefore not adequately treated), in a minority of cases it can cause complications with acute forms, such as tonsillar or retromandibular abscesses, with pus formation and high fever.

Furthermore, in about 1 case out of 100.000 complications mediated by immune-type mechanisms may arise, even after some time, including, for example:

Although rare, they are important complications: for this reason it is good not to neglect streptococcal infections by carrying out, when necessary, the correct antibiotic therapy

Read also: Exanthematous diseases, scarlet fever: what it is and how to cure it

What does it mean to have a positive TAS?


TAS is an acronym that stands for Anti Streptolysin Title. This is a blood test, now considered obsolete, which allows to detect the presence of antibodies against a particular toxin produced by streptococcus and called streptolisina.

An increase in TAS may simply indicate that our immune system has encountered strep in the past, but it does not mean that a strep infection is in progress. Therefore this examination certainly does not serve to identify the causes of pharyngitis.

Sources for this article: advice from paediatricians Marchisio, Maurizio De Martino, Gian Luigi Marseglia, Del Paesene guidelines for the management of pharyngotonsylitis in the pediatric age; All about streptococcus in "A scuola di salute", magazine of the Bambin Gesù pediatric hospital; Article The Mysteries of Streptococcal Pharyngitis, in the journal Curr Treat Options Pediatr, 2022

Read also: Cough in children, fever and children and colds in children

add a comment of Strep throat: EVERYTHING you NEED to know