Sun in pregnancy: the rules for taking it without risk 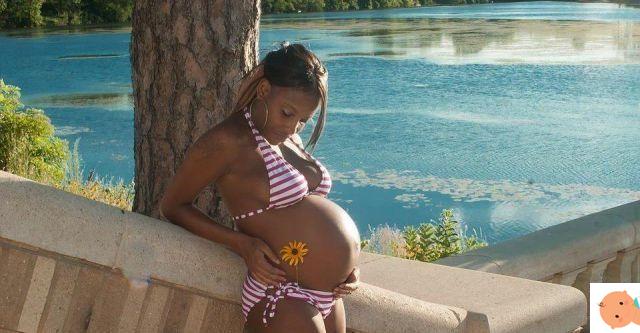 Summer is upon us, in the hottest places it has already arrived, and a question almost always pisses off pregnant women: will I be able to enjoy the sea with my belly? The answer is of course yes, but to sunbathe during pregnancy you must follow some precautions (it does not matter if the preferred summer dimension has always been "lizard in the sun") to avoid unpleasant consequences such as dehydration, sunstrokes, excessive increase in body temperature. , spots on the face (chloasma gravidarum), premature aging of the skin and increased risk of melanoma (skin cancer).

Which cream to choose for sunbathing during pregnancy

First of all, to sunbathe during pregnancy without running risks, you must choose a quality sunscreen, better without nickel, suitable for your complexion type (phototype) and in any case never lower than a protection level 15. The cream should be applied at least half a day. hour before sun exposure. Operation that must be repeated often and that, after relaxing on the beach, must be continued at home using rich moisturizers or a good after-sun.

In this way an invisible barrier is first formed that protects both from UVA and UVB rays and then a skin made more sensitive by the “revolutionary” hormones of pregnancy is hydrated. Skin elasticity can be put to the test in these months and a good ally could be collagen.

Sun in pregnancy and chloasma gravidarum

In the case of sun during pregnancy, the most common aesthetic discomfort is that of "chloasma gravidarum", the phenomenon whereby the skin of the face is filled with small dark brown spots with a symmetrical and bilateral arrangement on the nose and cheeks, hence the nickname of pregnancy mask. Those responsible are precisely the estrogen hormones which, in a chain work, stimulate a more abundant production of melanin, the substance responsible for tanning, which helps the formation of spots.


The only remedy against chloasma is prevention: it is necessary to protect the skin of the face during the summer months with a high protection sunscreen wherever you are, especially at the sea.

Chloasma should not be confused with melasma: the former, being linked to hormonal changes during pregnancy, often resolves on its own after childbirth (however, it can take a long time); melasma also causes dark spots to appear on the face, although it has a more uneven distribution, and is extremely resistant.

It may happen that it appears in summer and fades in winter and then reappears with obstinacy in the following warm months; it is caused by various factors (birth control pills, use of antibiotics, thyroid pathologies, perfumed creams), it has a genetic predisposition (such as chloasma), but it is not linked to pregnancy.

Sun in pregnancy and hydration

"Never without water" is the second imperative for those who do not want to give up the beach and sunbathe during pregnancy, which among other things helps to fix vitamin D. A phrase that must become the slogan of the holidays especially for those who are sweet waiting. The body with the belly requires more hydration and it is important to keep it fresh both to avoid painful swelling and the much hated water retention.

The advice is always the same: drink at least one and a half liters of water a day. Choose it natural and low in mineral content: the carbonated one swells and does not completely quench your thirst. Also, especially if it is very hot, avoid cold water: it could cause congestion that would not be good for either the mother or the baby.

Sun in pregnancy: beware of the heat

The aspect that you really need to pay attention to is the so-called "overheating" which, during the first trimester of pregnancy, could even compromise the correct development of the fetus: continuous and direct exposure to sunlight, especially during the hottest hours ( 11.30-16) is to be avoided; at the sea, with the heat lurking, you have to wet your feet, neck and wrists continuously, take shelter under the umbrella, walk on the water's edge, hydrate yourself with water and fresh fruit, protect your belly with a damp towel. And swim often.


What to eat when sunbathing during pregnancy

Nutrition also plays a fundamental role for the health of the future mother who wants to enjoy the sun during pregnancy: smoothies, juices and centrifuges, vegetables rich in vitamins and minerals fortify the sense of well-being and help to counteract the heat. In general, it is good to eat little and often without bingeing, giving up fatty or particularly processed foods and alcoholic beverages.

add a comment of Sun in pregnancy: the rules for taking it without risk