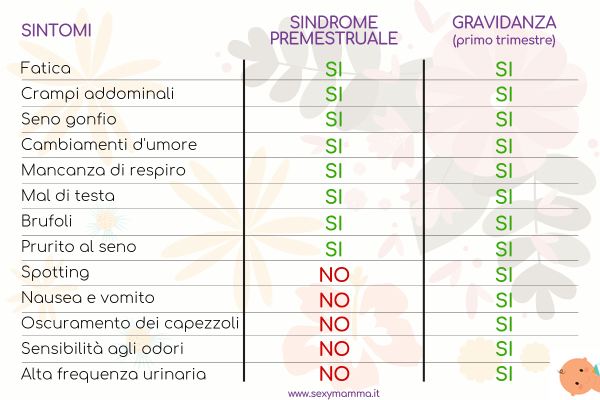 Symptoms of pregnancy vary a lot from woman to woman and even from pregnancy to pregnancy: some may experience all the common symptoms, others only a few symptoms, and still others may feel nothing. Even when symptoms occur in the very early stages, they can easily be confused with PMS symptoms, which are often similar because the hormonal situation is similar.

In general, some symptoms may be more frequent and more pronounced at the beginning of a pregnancy than during the premenstrual period, while others are definitely common to both phases. To be sure, however, the only possible way is to perform a pregnancy test.

Read also: Symptoms of the first week of pregnancy

Read also: Symptoms of the first week of pregnancy

Read also: When the first symptoms of a pregnancy appear

Video: How to Recognize Pregnancy Symptoms

In this video the gynecologist, Dr. Alfonso Rossetti, explains what are the signs of an ongoing pregnancy and how to distinguish pregnancy symptoms from premenstrual ones.

And here's another video on how ovulation works.

What are the early symptoms of pregnancy?

What are the symptoms of the menstrual cycle that are most commonly confused with those of a pregnancy?

Pelvic pain in the area of ​​the ovaries, swollen breasts or nipples, headache, unstable mood and irritability.

How to be sure that you are pregnant?

The only way to be sure is to take a pregnancy test.

add a comment of Symptoms of pregnancy or premenstrual symptoms?