Syndactyly: when the fingers are together 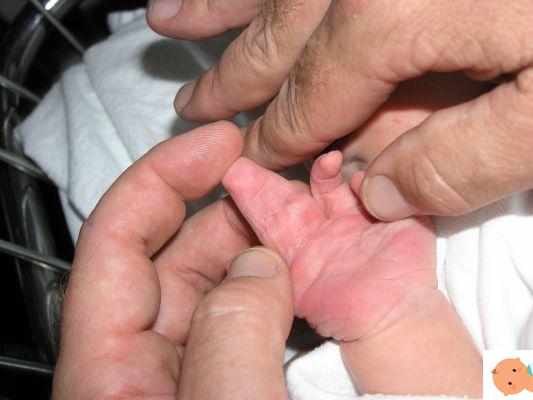 La syndactyly it is the fusion of two or more fingers or, more rarely, of the feet. The merger can relate only the skin or other soft tissue flaps (in these cases, the fingers may take on a webbed appearance), or even the bones and tendons. Sometimes, joint toes can also have other malformations of the phalanges.


Fusion can be Assessment, if the affected fingers are joined along their entire length, or incomplete, if it affects only a portion of the fingers.

In most cases, syndactyly affects the middle and ring fingers, but it can also involve other pairs of fingers, or more than two fingers together. Also, it can relate one hand (or foot) or both.

What does syndactyly depend on?

Syndactyly is one congenital malformation (that is, present since birth) rather frequent: indeed it is of interest one child every 2500-3000 and it's more common in males. This condition is caused by abnormalities in embryonic development occurring very early in pregnancy, between the 6 and the 8 weeks.


Often, syndactyly occurs on its own (with no other alterations present) and without knowing exactly why, but there are cases where it is clearly hereditary (it is also present in other family members) and cases where it is part of more complex genetic syndromes, also characterized by other anomalies. This is what can happen, for example, in the syndromes of Apert or Poland.

How it is diagnosed

Sometimes, syndactyly can be noticed already pregnant, during one of the routine ultrasound scans. However, this does not always happen and often the malformation is evident only at birth. To understand exactly the degree of complexity of the merger, it may be useful to perform one bone scan.

In milder cases (for example if the syndactyly - perhaps in one foot - is incomplete and only affects the skin), the choice is often not to intervene. The only possible treatment, however, is type surgical, to separate the tissues involved in the fusion.

After the operation, which can be more or less complex depending on the type of fusion, the hand or foot involved is generally immobilized with plaster and, after its removal, some physiotherapy specific.

L'ideal age for surgery it depends on various factors, for example which fingers are affected and how complex the fusion is. In general, an operation already in the first months of life gives the advantage of avoiding problems in the growth of longer fingers, which could be deformed by the fusion, but has the disadvantage of being more difficult, due to the small size of the fingers.

As for the hand, action is often already taken between six months and a year for syndactyly involving thumb and index finger and ring finger and little finger, e between two and four years in the other case.

Since surgical treatment can also be complex, it is best to refer to one pediatric surgery center who has experience in hand microsurgery.

TAG:
Shaking syndrome: what it is, symptoms and risks ❯

add a comment of Syndactyly: when the fingers are together