Taking off your shoes at home, that's why it's useful for children (and for health) 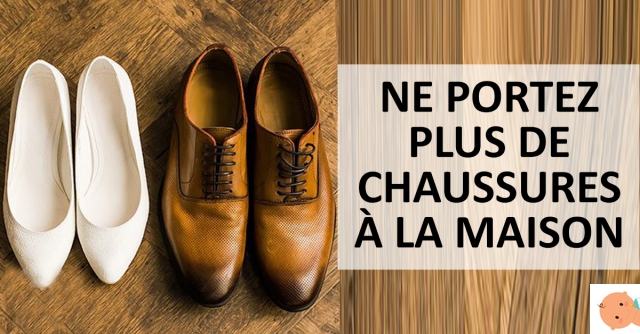 Remove your shoes in the house it is a common practice in Asian and Middle Eastern countries, but not only. This is also a typical habit of the Nordic countries. In many western states, however, staying indoors without shoes is not a widespread practice and can even be "weird".

In fact, according to research carried out by the University of Arizona, taking off your shoes at home is a good habit because helps keep viruses and bacteria away. There are also researches that support the importance, especially for children, of walking barefoot, even at home. Here, then, are the studies in favor of this positive domestic practice to be adopted in the family.

At home it's best to take off your shoes, that's why

The University of Arizona professor and microbiologist Charles P. Gerba and his research team have studied how many and what types of bacteria are found in the bottom of people's shoes. In 2008, the team conducted a survey of new shoes worn by 10 people for two weeks and found that coliform bacteria were extremely common on the outside of their shoes.

Shoes in the house and coronavirus

According to the Ministry of Health, the survival time of the virus in open places is not known to date. «Theoretically, if you walk with the sole of your shoes on a surface where an infected person has expelled respiratory secretions such as phlegm, etc. it is possible that the virus is present on the sole and could be brought into the house. However, the floor is not one of the surfaces we normally touch, so the risk is negligible ».

However, always as advised by the Ministry, in the presence of children it is possible to be cautious in respecting normal hygiene rules: that's enough take off your shoes at the entrance at home and clean the floors with 0.1% chlorine-based products (simple bleach or diluted bleach).

The advantages of walking barefoot

It is important for children to walk and jump barefoot. The little ones who walk barefoot from an early age they demonstrate, when they grow up, better motor performance: this is supported by a study conducted by the University of Jena (Germany) and published in the scientific journal Frontiers in Pediatrics.

The study found that shoes are obviously important for the development of motor skills during childhood and adolescence. But the researchers also pointed out how le physical activities carried out without shoes can be useful for the development of jumping and balance skills, especially between the ages of 6 and 10.

You learn more and relax more

According to another study, published in 2022 by Bournemouth University and which involved pupils in 25 schools around the world for ten years, the students without shoes at school they learn and read more. According to this research, children perform even better and score better than their mates with shoes.

This would work because according to experts, children, barefoot, feel more relaxed, as if they were at home. Professor Stephen Heppel, who oversaw the research, explains to the British magazine Independent that “When they don't have shoes, children relax more and want to sit on the floor and read more. The last thing a child wants is to read while sitting in a high chair. We have found that 95% of them in fact do not read on chairs at home, but while lying down ».

The two researches listed above therefore confirm the advantages, for children, of staying at home with bare feet. Taking off shoes offers the little ones greater serenity and well-being and, moreover, walking without shoes helps to develop motor skills better. And don't forget the hygienic benefits of taking off your shoes while you are at home: in this world you can avoid carrying around bacteria.

Read also: This is why it is best to let children walk barefoot TAG:
Canned tuna when pregnant: can it be eaten? ❯

add a comment of Taking off your shoes at home, that's why it's useful for children (and for health)