Tattoos and piercings: how to handle the requests of teenagers 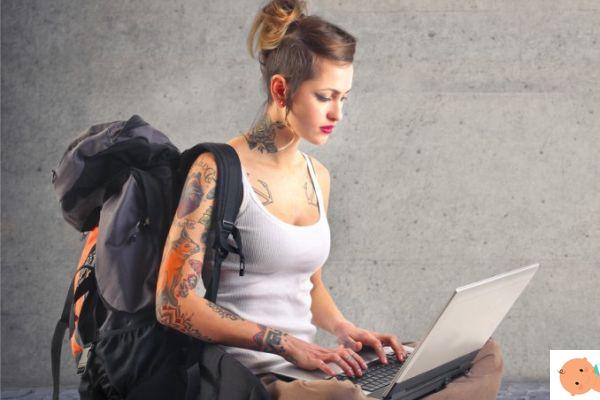 Often, when theadolescence, the boys ask to do a tattoo or piercing. It is a question that answers the logic of this moment of growth and the need to experiment and regain possession of one's body. But how can parents deal with this request? We understand this together with the psychologist

«The evolution of the body, from infantile to sexual puberty, is one of the first difficult tasks of the adolescent - explains the expert -. Puberty leads to the formation of secondary sexual traits transforming the boy's physique. A change that the young person undergoes and does not choose ».

Growing up, the boy begins to see his own sexuality in an ever-changing body. «Puberty is the gateway to the tiring and complicated process of building one's gender identity. A process that first of all passes through the recognition and acceptance of one's own body and which is not always easy and obvious: in fact, there are many issues related to adolescent malaise that pass through this passage ".

Looking at your body and appreciating it as it is the result of a long process. In some known pathologies in adolescence, the body is a means of denigration, violence, wounds. "There are also non-violent manipulations that can represent a reappropriation of one's own corporeality". THE tattoos and piercing they represent this: a way for the boy to act on his own body independently.

2. What do they represent?

«Today, the tattoo or piercing it is no longer a symbol of transgression as it did in the last century. Before, tattoos were the symbol of people of ill repute, minorities: now they have a more cultural and generational background, they lose their transgressive value, becoming a way to regain possession of your body". This gesture, at a very profound level, can mean "the attempt to distance oneself from the mother who was the main curator of the body in childhood". By expelling the figure who cared for and raised him, the teenager wants to show that the body now becomes hers. "These modes of expression and manipulation are part of the more or less conflicting attempts to separate from one's parents."

«The parent must keep his role, that is, express his position and his reference values. He has a duty to say if he agrees or not. THE tattoos or percing cannot be done without parental authorization for a child under 18, so the choice goes through a bargaining, in which the teenager will expose his or her requests, trying to build his own idea separate from his parents, believing what is right for him".

This moment of confrontation / confrontation is an integral part of growth. «The adolescent begins to have an opinion of her on many things, different and distant from those of her parents. The dialogic and conflictual aspect is part of the growth path of the boy within the family and is healthy, has an evolutionary function ».

Read also: Tattoos and piercings: what risks are there and how to do them safely

A tip on where to investigate: "the transgressive aspect today is not found in feeling different, but in homologation". Following the crowd is a choice that can move the decision to scratch one's skin and investigating this aspect is very important: «as parents you must understand what are the reasons that push the choice: does the best friend do it too? Do you do it to stand out? Is there a meaning? "


The tattoo can have a symbolic value and mark something personal, "and the parents in the discussion must have as their goal the understanding of the meaning behind this choice: perhaps it wants to imprint an important passage in one's life or, more simply, it is a request dictated by a pure aesthetic question ".

"THE piercing they are more advanced than tattoos, because the market offers a wide choice, from a simple earring to a dilator. The piercing still contains a transgressive part, especially according to the part of the body that is chosen: for example, an ear piercing is different from a breast one. Depending on the part of the body chosen, whether it is more intimate or more visible, it is important to investigate the reasons for this design ».

Read also: How to remove a tattoo

We must not forget that theteenager, by its nature, it tends to take risks, often acting without thinking: "we need to help children keep track of the meaning of their actions, so that they can make an informed choice".

Read also: the mind of teenagers, 10 things to know

Do you want a tattoo? Here are some ideas NOT to consider: exaggerate, reckless, unsuccessful ... here are some of the most trashy tattoos ever seen on the Web!

TAG:
Tattoos and piercings in pregnancy: tips and risks ❯

add a comment of Tattoos and piercings: how to handle the requests of teenagers