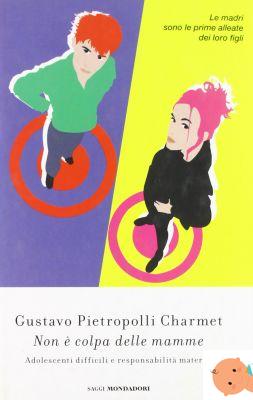 “Two minors at risk”: is the expression used by Cinzia Lucia Paolini, head of the adolescent gynecology clinic at the San Paolo Hospital in our city, to briefly summarize the characteristics of a teenage pregnancy. “Risk for the mother, which the very young age exposes to a greater probability of obstetric complications and of ailments such as postpartum depression, and for the child, who when he is born may not find a ground prepared to be cared for ".

Paolini works in a hospital that is a center of excellence for the assistance of adolescent mothers (minors or in any case under 21 years of age), having set up an experimental project a few years ago together with the University of our city Bicocca. today it has become a (public) service for accompanying parenting in adolescence: SAGA. Here is what he tells us, along with other protagonists of the service, about these particular pregnancies.

Pregnancy in adolescence: some data

There are countries, for example the United States or the United Kingdom, or even more the countries of Eastern Europe, in which adolescent pregnancies are a numerically important phenomenon, a major social and public health issue. In Del Paese this is not the case: according to the latest Eurostat data, just published, in our country the pregnancies of mothers under the age of 20 have been l'1,6% of the total in 2022, which places us among the most virtuous European countries from this point of view. (According to data from the Ministry of Health, the1,28% in 2022, equal to approximately 6120 births).


“It is therefore a marginal phenomenon” comments the psychologist Cristina Riva-Crugnola, scientific manager for the Bicocca University of the SAGA project. Which does not mean that it is not at the same time of great impact for those who experience it.

Read also: Mom at 40, here's what you need to know

Both internationally and nationally, in the majority of cases adolescent mothers belong to low or very low socio-economic profiles, have a low level of education and come from problem families. "For example, it is very common that they are themselves the daughters of teenage mothers or that they have experienced conditions of neglect, abandonment, mistreatment, sometimes abuse," says Riva-Crugnola.


Many of them no longer go to school, they have difficulty finding a job and do not have stable relationships, so they find themselves in a situation of discomfort, of identity void and pregnancy can represent an unconscious way to deal with it, perhaps with unconscious thinking. that the arrival of a child can represent a positive change in the quality of life. It does not mean that these pregnancies are actively sought, but it does not mean that they are completely random. "Often at the base there is a behavior that is not fully aware", clarifies the referent of the San Paolo Service, the neuropsychomotricist Margherita Moioli. "Maybe they say they didn't want a child, but they didn't do anything to prevent him from coming, even though they knew very well what had to be done in this sense."

Of course, there are also teenage mothers with positive situations and environments behind them, solid families, who study and continue to do so even after discovering about pregnancy. "At SAGA, which is a specific service for situations at risk, we see few of them with these characteristics, but I would say that in general we see few of them throughout our birth point, which on the whole does not refer only to these situations" he comments Paolini.

Teen mom and baby: a conflict of interest

Compared to the way of living and feeling pregnancy, teenage moms typically have little awareness of what is happening. “They don't see themselves as 'pregnant', so much so that often, when we ask them to draw themselves, they do it without representing the baby bump,” says Riva-Crugnola. And again: “They find it very difficult to have a mental representation of their child and after birth they find it very difficult to recognize, accept and satisfy his needs, especially if they are really very young. On the other hand, the case of mothers, albeit young, who are already 19, 20 or 21 years old, who tend to be more ready to orient themselves towards the needs of the child, is different ”.

It is not surprising that this is the case. Moioli explains: "In adolescent mothers, very young age exposes them to an enormous conflict between their needs as adolescents - for example, separating from their mother, experiencing autonomy, perhaps with a hint of recklessness - and the needs of a newborn, who requires care. , attention, dedication, so they return to depend on their family of origin even more than before ".

Read also: Needs or "whims"? How to react to the baby's cry

The risks for the teenage mother

According to the scientific literature, there are specific risks that very young mothers face. For example, they tend to suffer more often than childless peers or adult mothers from psychological disorders such as depression. And it often happens that adolescent pregnancies do not remain isolated but that these mothers have more children always at a very young age.

Read also: Postpartum depression: what it is, how to recognize it, how to overcome it

"But by now it has become increasingly clear that for these mothers there are specific risks also with regard to the obstetric aspect," says Paolini. Emphasizing that adolescent pregnancies increase the risks of complications such as reduced development and growth retardation of the fetus (although this can help during childbirth), premature birth, hypertensive diseases such as preeclampsia.

“These are risks that are observed internationally, but we don't know exactly why they occur. Maybe it partly depends on the fact that the maternal organism is not yet fully formed (think for example of the bone structure), or of the fact that these mothers often implement unhealthy behaviors, such as smoking, eating a very unhealthy diet, continuing to binge on junk food as they did before pregnancy, paying little attention to the prevention of infections such as toxoplasmosis or sexually transmitted infections ”.

“But when the time comes, they come up with one incredible grit and they often pose themselves in an even more positive way than adult mothers, perhaps because they have shorter labor times on average ”. In reality, it may happen that the immaturity of the body's development makes them unsuitable for giving birth vaginally, "but if the conditions are right, every effort is made so that they can do it, even with the help of an epidural, to avoid the injury of a caesarean ".

Finally, compared to the birth of an adult woman, that of a girl can be much more complicated from a family point of view. "If there is a partner we try to give him space, but - when they are present - both the mother's and father's families tend to be very intrusive".

The possible risks for the baby

Even the baby can take risks when his mom is too young. Some are linked to any complications of pregnancy, such as fetal growth retardation and premature birth. "And always from a medical point of view it is observed that even if they are born without problems, these babies tend to have some more problems in the first month of life, for example in terms of neonatal infections or hospitalizations in neonatal pathology”Says Paolini.

The cause? "Even in this case it has not yet been clearly established: it could have to do with less attention to their state of health, or less ability to recognize any problems".

And there could also be the risk of shaking syndrome: “Teenage mothers are often exposed to fits of anger, especially when the baby cries intensely and never seems to stop,” explains Moioli. "Faced with this situation perceived as intolerable, some may react by shaking the child, not to harm him but perhaps because they think that in this way they will be able to calm him". But the consequences can be very serious. (Obviously, this is true in general, from a statistical point of view: there may still be children of teenage mothers who have no problems!)

Other major risks are those that have to do with it development of the child after birth, from various points of view: psychomotor, linguistic, cognitive. “Often adolescent mothers, who are also in the midst of a delicate phase of development, interact in a non-functional way with their children” explains Moioli. “They can be very intrusive, leaving little room for the possibility of autonomous development of the movement and respect for children's times. And they tend to speak little with them, to stimulate them little, in favor of early and prolonged exposure to TV or video games. "The result is that these children run some extra risk in terms of language and behavioral disorders.

“The central point of the matter is that very young mothers often find it difficult to 'read' the needs of the child and to react accordingly,” says Riva-Crugnola. In particular, they can find it difficult to tune in to his emotional needs and respond to them adequately, which however is now considered the basis of secure attachment, a phenomenon on which greater psychological balance of the child and better social skills seem to depend.

Read also: Bonding mom and baby: 6 ways to promote it

How to support a teen mom


Even at a very young age, pregnancy and motherhood can be fine and lead to a good mother-child relationship, but in general for this to happen it is good that the future mother (and the new mother with her puppy) is not left alone, and is followed in a careful and dedicated way, possibly by expert operators.

It was from this belief that the idea of ​​SAGA was born, a service that takes care of the development and well-being of the mother and child and the quality of their relationship throughout the first year of the baby's life. Here, for example, a lot of work is done to provide the mother with the tools to understand the language of her newborn baby, to reduce the risks for the child's development and to safeguard the mother's developmental path. For example, the operators try to encourage the child's inclusion in the nursery, so that the young mother finds a time and space that is all of her own, perhaps by returning to school or finding a job.

TAG:
Mothers, help your daughters not to grow up obsessed with beauty ❯