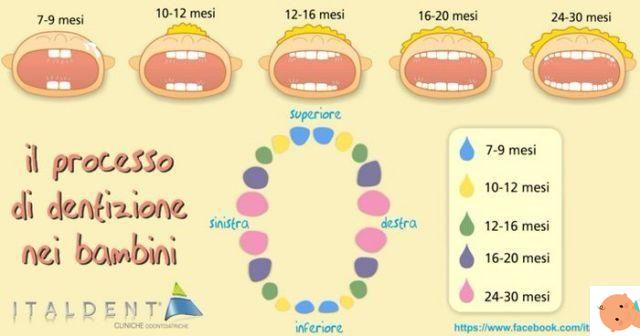 "Poor thing, his teeth are coming out and he's complaining all the time!" "Tonight he woke up many times: it will be pain in the gums!" "He got fever and diarrhea: the fault of the canines!" He often hears mothers making such statements: in the period of the eruption of the baby's teeth, any discomfort is attributed to the infamous teeth. But will it be true? And how to alleviate any pain in the baby?

We have turned the most common questions among new mothers to Luca Mazzucchelli, doctor of the Child Dentistry Operating Unit of the San Paolo Hospital in our city


The eruption of the teeth lasts two years.

The eruption of milk teeth (20 in total) begins around 6-8 months and ends around 30 months; however, these are not fixed dates and not infrequently the first tooth comes out at the age of one and the last one around 3 years of age.

Do babies feel discomfort or pain when their teeth come out?

It is commonly believed that whenever a tooth is about to come out, the baby feels pain. According to scientific evidence, the eruption of a tooth does not cause pain (we adults perhaps remember that we felt pain when our permanent teeth came out?), But the baby could be annoyed by the 'novelty' he perceives inside the his mouth.

In particular, the most annoying could be the first incisors and the molars: the incisors because this is an experience never tried before; the molars because they are the largest.

What can be done to relieve the discomfort?

The answer? Pampering and gum massaging. Gum massagers can be given to children. These are rough rubber toys containing coolant liquid to keep in the fridge or freezer and give the child to 'nibble': the anesthetic effect of the cold, combined with the massage exerted by the rough surface, help to 'distract' the child from the annoying sensation .

Le cuddles they are perhaps the most effective remedy: a little pampering and maybe a massage on the gums with the mother's finger give the baby the beneficial feeling of being cared for and consoled.

What if the baby wakes up at night?

It is difficult for the baby to wake up on purpose because he has pain in his teeth: more likely, if he wakes up for other reasons, he will have difficulty falling back asleep precisely because he feels tension in the gums. In that case, there is nothing better than reassuring him standing next to him until he falls asleep again.

THE DEBATED TOPIC - Fever, diarrhea: is it the fault of the teeth?

"There is no scientifically proven correlation between these fever, diarrhea and tooth eruption: it is true, however, that the growth of the teeth can coincide with the period in which the child first comes into contact with certain infections, which can manifesting oneself precisely with these disorders, "Luca Mazzucchelli, doctor of the Operating Unit of Child Dentistry of the San Paolo Hospital in our city, cut short.

According to the Great Encyclopedia of the Child (Sphere), "The fact that the baby gets sick more during teething is just a coincidence. In fact, the teeth begin to emerge just at the time when the baby's organism ceases to be protected. from maternal antibodies received during pregnancy ".

The position of Angela Galeotti, Head of Odontostomatology of the Bambin Gesù Pediatric Hospital of the city, is less trenchant, according to which "the possible concomitance with fever or other illnesses could be due to a general weakening that predisposes to the contagion of some virus. On the other hand, it can be assumed that hypersalivation leads to softening of the stools with sporadic episodes of diarrhea ".

add a comment of Teething children, ailments and remedies