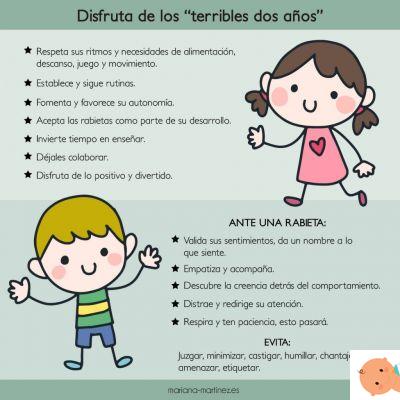 I new parents they think nothing is as difficult and tiring as managing a newborn. Parents of slightly older children think that nothing is worse than terrible two. But how come i children, from chubby, funny and tender, do they become like this?

From newborn to child, a big change

It is true that the initial phase, that of the first months, is terrible for many reasons: lack of sleep, breastfeeding, diapers to change, the upset rhythms. Everything seems insurmountable, very tiring and infinite: but anyone who has had a son he knows that then it really passes as they say. Then comes one phase in which yes, it is still tiring to keep up with a little one who runs and wants to discover the world, but after the year the children run more, they dirty less diapers, they begin to make themselves understood at least by gestures, they more regular rhythms and in general, thank you to the interaction, they become pleasant and fun companions. And then suddenly… the idyll ends. Here come the terrible two!

The sweet child dispensing basins, picking up the broom to help mom and dad, giving her hand in the street and he ate everything suddenly turns into a kind of Tasmanian Devil: he throws himself on the ground at the slightest opposition, yell out, weeps, sometimes he even beats, throws things, he doesn't want to eat anything anymore, he doesn't want to leave the places, he goes to the supermarket scenes for everything and, above all, always says DO NOT.

Recognize your son in the description? Don't worry, you are not alone!

Put your children, arrived at the two years, they experience a phase like this. It does not mean that everyone will throw a tantrum, but by learning to recognize themselves as distinct human beings, as an "I", they will also discover other aspects, such as being able to "possess", or the possibility of saying no. And they'll just play with it!

Advice for parents: it takes patience

when the children enter the fase dei terrible two many Parents they are desperate because they don't know what to do. Yup they blame, they think they spoil or on the contrary do not dedicate enough time for the children, in reality there are no rules: as we said, all children they experience this opposition phase, more or less intense. But something can be done, at least to limit the "damage".

Read also: “Terrible two”: a small manual for parents to survive the whims

We are aware that these tips seem too difficult to put into practice, because it is really difficult to bear un baby screaming, cries, says no to everything, throws himself on the ground and refuses everything. But remember that he is not angry with you, far from it. You are not wrong, you are not bad parents, it is a phase that will pass just as it came. But others will come: they will be more manageable because the children will talk, they will clearly express what they want and be more reasonable, but you will need a lot patience. Then take i terrible two like a gym for the future, and if you really feel like you can't make it, grab one break: an afternoon away from everyone and everyone will not cause problems for anyone.

I terrible two they are a difficult phase that children experience between 2 and 4 years, when they discover they can test the limits of the people they love. But as all stages pass, so arm yourself with patience and don't get angry at them anymore, it's useless!

Some call them "the terrible two"

add a comment of Terrible two: how to recognize them, how long they last and how to manage them