Tetanus: the disease, the treatments, the vaccine 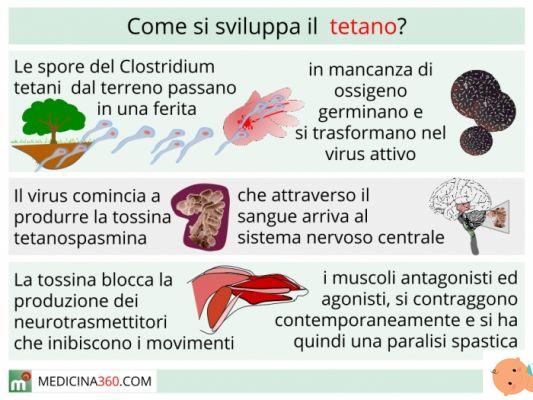 Tetanus is one non-contagious infectious disease - therefore it cannot be passed from person to person - caused by a bacterium called Clostridium tetani. Or, rather, from one toxin produced by the bacterium same.


It is a serious disease - approx 10-20% of cases are fatal - which fortunately can be easily prevented with a vaccination.

Tetanus, how to take it

The bacterium normally lives in the intestines of various animals (including humans), so it is released into the environment via the faeces. In the form of spores, it can be present practically anywhere, in particular in the dust and in the earth, from where the spores themselves can enter our organism through even small and trivial wounds. If they find the right conditions, the spores germinate, giving life to "active" bacteria that produce the toxin responsible for the disease.


Due to these characteristics, tetanus can for example occur in people not protected by vaccination (which must be repeated every 10 years) struggling with gardening activities. If not vaccinated, even children can be victims. Sometimes, even the animal bite it can be a vehicle for infection.

A particular form of tetanus is that which affects infants - it is then referred to neonatal tetanus - observed mainly in developing countries. It affects children born to unvaccinated mothers, which therefore do not have the protection conferred in the first months of life by maternal antibodies and usually occurs following umbilical cord stump infections, particularly frequent when the cord itself is cut with non-sterile instruments. Unfortunately, this form of tetanus is highly lethal.

Read also: The care of the umbilical cord

The tetanus situation in Europe


According to the latest available report from the European Center for Disease Control, in 2022 there were 89 cases of tetanus throughout Europe, of which 30 - a third of cases - in our country. However, the number is down compared to 2022, when 117 and 48 cases respectively occurred.

More than seven out of ten cases occur in people over the age of 65, probably related to one low vaccination coverage or decreased immunity. In this age group, twice as many women are affected, as opposed to all the others. Most infections occur in the summer months, peaking in September due to increased outdoor activities.

Tetanus typically presents with one feature contracture of some muscles of the face, which they follow muscle spasms and stiffness starting from the head and then progressing to the neck - with difficulty swallowing - the trunk and limbs.


These spasms are usually painful and can be painful if they affect the respiratory muscles make breathing difficult: hence the possible lethality of the disease. Other symptoms include fever, high sweating, tachycardia.

Tetanus, how to cure it

The treatments to be done mainly concern two fronts:

If the symptoms are already particularly severe, you may need the mechanical ventilation to support breathing.

In addition to this, specific therapies may be needed for any complications arising as a result of infection, including for example pneumonia or bone fractures.

Since the disease it does not confer immunity, patients who have had tetanus should start or continue the vaccination course as soon as their clinical condition allows.

So it's no joke with tetanus, but the good news is that it is an easily preventable disease thanks to vaccination.

The tetanus vaccine has been on the market since the early 40s and is based on a chemically inactivated form of the toxin. Typically, the vaccine is combined with diphtheria and pertussis vaccines and is part of the so-called hexavalent. Tetanus vaccination is among them compulsory in Del Paese.

According to the vaccination calendar 2022-2022, for the new born they are foreseen three doses of vaccination (with hexavalent) - at the third, fifth and eleventh month - plus two calls at 6 years (with trivalent diphtheria-tetanus-pertussis) and in adolescence (with quadrivalent diphtheria-tetanus-pertussis-polio). After adolescence, it must be done a recall every 10 years.

As with other vaccines, tetanus should not be given if the child has had severe allergic reactions to the vaccine itself, while it should be postponed if moderate or severe acute illnesses or neurological diseases not yet stabilized or with no identified cause are in progress.

Vaccination often has no consequences, but some side effects mild are however possible. These include, in particular, fever and the appearance of local reactions (redness, swelling and pain at the injection site).

Back to the special VACCINATIONS FOR CHILDREN

Read also: vaccines and children, guide from A to Z TAG:
The Happy Song: the song created by experts to make children happy ❯

add a comment of Tetanus: the disease, the treatments, the vaccine