The 4 stages of childbirth 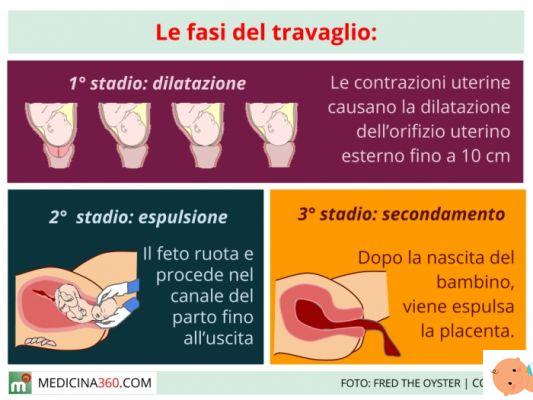 How does the birth take place?

According to the classic subdivision, childbirth is made up of four "times":

Other classification systems identify only three phases, considering the dilating and expulsive phases as part of a single period of active labor. So:

There is strength, tenderness, humanity. And life. It is not easy to describe the moment when a woman gives birth to her child. Especially when we talk about natural childbirth, ...

It is a preparation phase, in which the mother's tissues prepare for the passage and exit of the baby. All in all, it can last from a few hours to a few days: difficult to understand when it starts, because it is not always characterized by precise signals.

Sometimes it even goes unnoticed, while in many cases it is accompanied by preparatory contractions, which are quite irregular and more or less intense, but bearable. «Initially, the contractions can occur with a certain cadence, stop for a few hours and then resume, especially at night. They are generally similar to menstrual pain "explains Sonia Brugali, midwife at the Pesenti-Fenaroli hospital in Alzano Lombardo (BG).

"These contractions can be combined other signs that something is changing"continues the midwife." For example, you lose the mucous plug (a gelatinous substance that, just like a plug, closes the uterine neck) and you may have some episodes of dysentery or feel a sense of exhaustion ".

A little at a time, the cervix smooths out, shortening and thinning, until it takes on the appearance of a thin disc. To give an idea, the uterus, which initially has the shape of an upside-down pear, takes the shape of an orange, which allows to start the dilation.

Second half - The dilating phase of childbirth

It is the beginning of actual labor, the moment in which one usually goes to the hospital, and it is distinguished from the prodromal period for the type of contractions, which become more painful and regular. There is talk of actual labor when contractions occur roughly every five minutes and last around 40-60 seconds.

"If the labor is physiological, it is not necessary for the hospitalized mother to go to the labor room or the delivery room" suggests Brugali. "You can safely stay in the room and do everything that allows you to promote dilation, relieve pain and distract yourself: change your position often, walk, swing against a large ball (in the hospital there are more and more often), take a shower or a bath, put a hot water bottle on the back, listen to music ".

And again: "If you wish, the woman can have sugary drinks or foods, such as chocolate or biscuits, which give energy - even to the child - and are not contraindicated even in the case of a caesarean, since loco-regional anesthesia is almost always practiced ”.

As for the duration of this phase, there are no certainties: times vary greatly from woman to woman and depend on various factors. Among these, for example, maternal characteristics, such as the physical structure and shape of the birth canal (but also psychological components), fetal characteristics, such as size, place of birth and assistance modalities. In other words, how labor is experienced can also affect how long it lasts.

In general, however, according to the English guidelines for physiological delivery, at the first birth, the duration of labor up to the expulsive phase should not exceed 18 hours, which drop to 12 in the case of subsequent children.

Under the stimulation of contractions, the cervix dilates progressively until reaching what is considered a complete dilation, equal to 10 cm. In the meantime, the baby's head begins to descend along the birth canal. In many cases, the time of labor is when the rupture of membranes, which sometimes, however, can occur even earlier.

Read also: Childbirth has begun: when to go to the hospital?

It is the phase of birth and corresponds to the time in which the fetus goes through the birth canal to leave the mother's body.

In fact, before the actual expulsive period there is one transition phase, called "latency", which is like nature's intended rest break before the final sprint: it lasts about half an hour and it appears that the contractions stop and labor has stalled, even though the baby's progression is continuing. "It is an important physiological pause to be respected, without trying to force the time, because it helps the mother's tissues to adapt to the passage of the child" observes Brugali.

At the end of the interval, the woman begins to warn i squeeze, that is, an urgent sensation of pushing, as if it were to release itself. What to do? "Simply to indulge this impulse, looking for the position that allows you to push better: sitting, squatting, crouching on a mattress "answers the midwife.

Also for this phase, the duration is very variable: "If it is the first birth and there are no signs of fetal distress, you can wait up to two hours, or even three, if the parturient has had an epidural, while the subsequent deliveries are generally faster ".

The baby is going down the birth canal and, as he does so, he flexes his head more and more, with the chin towards the chest in order to minimize its size, e performs partial rotations, to adapt its diameters to those of the pelvis. Once the head comes out, the little one, helped by another contraction of the mother, performs a last rotation, of about 45 degrees, to free the shoulders and finally "slip" out.

Fourth period - The phase of the afterbirth.

After birth, the umbilical cord is severed (clampaggio). The timing of this varies from hospital to hospital: some do it immediately, others after the cord has stopped pulsing (typically takes 2-3 minutes), a condition that is considered more physiological.

The last stage of childbirth is represented by the afterbirth, that is, the expulsion of the placenta, which usually occurs in the turn of 15 20-minute, but with large individual variations. In some cases, the obstetrician may try to favor expulsion with light pressure on the abdominal wall, which is however not recommended in order to fully respect the physiology of childbirth. In any case, if nothing happens within an hour, an active intervention may be necessary, i.e. manual extraction of the placenta, which takes place in the operating room with general anesthesia.

Once the placenta is released, it's time for the suture of any lacerations, spontaneous or due to episiotomy.

During all this period, if there are no (rare) complications that require special interventions, usually the mother has a way of meet your baby, which is placed on her chest, waiting for it to be entrusted to the nursing home for washing and the necessary checks that the neonatologist will perform.

Usually, after the birth, the mother stays in the delivery room for a couple of hours with her baby: it is an important moment, in which they are put into action physiological mechanisms of contraction of the uterus - also favored by the first breast suckings - which help to resize it and avoid bleeding.

Sources for this article: consultancy from Sonia Brugali, midwife at the Pesenti-Fenaroli Hospital in Alzano Lombardo (BG); Physiology of Birth manual, by R. Spandrio, A. Regalia and G. Bestetti (Carocci, 2022).

TAG:
The 40 weeks of pregnancy ❯