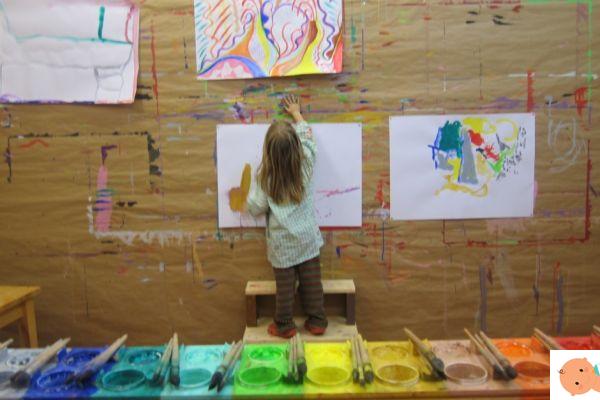 What it consists of the Arno Stern method, watch the video

Painting and drawing without rules, but above all, without the fear of being judged. This is the method developed by the German educator Arno Stern, who in 1949 opened the Closlieu in Paris, an atelier entirely dedicated to children's art.


His business was born from an awareness: “The act of tracing is part of the fundamental needs of the human being and the predisposition to that act exists in each of us. Performing it offers us unlimited pleasure ”he wrote in his book Felice as a child who paints (Armando Editore, della città, 2006).

Children can draw freely, with an educator present who supports them without imposing his will

"The Arno Stern method allows children to free their emotions - says Patrizia Pappini, president of SOStegno 70 - It consists of a vertical palette that allows you to position sheets in such a way that children can freely draw what they feel".


Thus painting turns into the pleasure of leaving a trace, a primordial game that is continually renewed. But for this method to work, certain conditions must be respected: first of all, this activity must be carried out in a protected place, with other individuals inside, who thus become playmates and not just spectators; finally, there must be an educator who supports the children in their game without however imposing his will.

"Papers are placed on a vertical palette and children are encouraged to draw - continues Patrizia Pappini - The colors must be very dense, to prevent them from dripping, and the educator's task is exclusively to direct them to the use of the tools that they have at their disposal, colors and brushes, without however forcing their creativity ".

Without judgments and votes, the little ones learn to know and accept each other in a serene atmosphere, also acquiring greater autonomy. A method that is sometimes also used in the pediatric field to alleviate the anxieties that children may experience before a medical examination. With a positive implication also for parents, who feel calmer if they see their children happy.

This is what happened for example at the San Raffaele Hospital in our city where the drawings made by the children were also exhibited in an exhibition.

Playing with geometric shapes according to the Montessori method

Here is a job that combines creativity and imaginative freedom with order and knowledge. At first the children, stimulated by geometric shapes and colors, let go ...

TAG:
The Billings method: understanding if you are fertile with the mucus method ❯