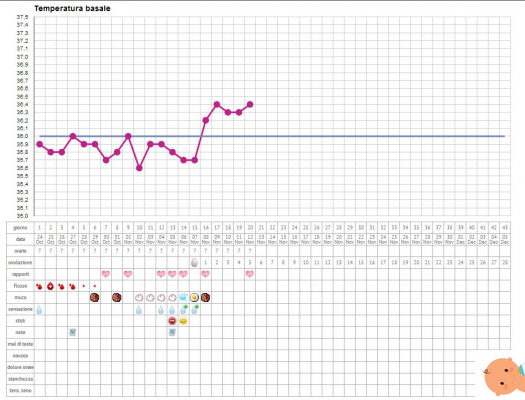 It is called basal temperature because it must be measured in basal conditions, that is, in the morning, before getting out of bed, eating or starting any activity.

The measurement can be performed axillary or, for a more precise result, vaginal or rectal. It is important to always do it with the same thermometer (there are also specific ones for measuring the basal temperature) and to note it every day to detect changes over time.

"The basal temperature method is based on the fact that 24 hours before ovulation and during ovulation the body temperature rises by about half a degree (for example it goes from 36.2-3 ° to 36.8 °), after which it drops slightly ( for example 36.5-6 °) until the arrival of menstruation, when it falls again ”explains the gynecologist Rossana.


The temperature can be measured starting at the end of the period and until the next cycle. Unless pregnancy arrives, of course, which raises progesterone levels and keeps the temperature higher.

"The basal temperature is not a scientific method, because the temperature can be influenced by various factors, such as a common cold, a hormonal imbalance or the use of certain drugs" comments the gynecologist. “In addition, the variations are minimal and it takes very little to get confused. For this reason, the measurement of the basal temperature is a method that is now considered outdated: to make a more precise monitoring of ovulation, it is better to rely on ovulation sticks, while as a contraceptive system it is much safer to choose other methods, such as the pill, the spiral or the condom ".

TAG:
The home temperature when there is a baby or toddler ❯