The characteristics of the Aquarius child 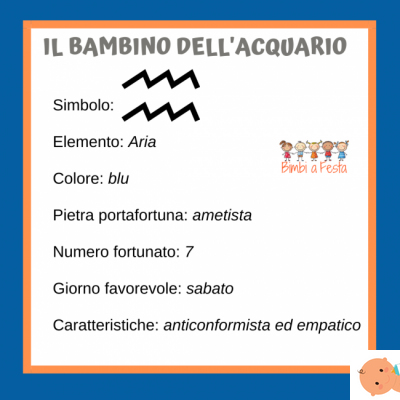 Il Aquarius child has a strong and original personality; from an early age he is lively, curious, anarchist and libertarian, always ready to experiment with new games and live adventures.

His mind is open to all stimuli; it is therefore advisable that parents raise this child respecting his independent and individualistic nature. Do not be authoritarian because the little Aquarius would react with open rebellion. With this child an understanding and open attitude pays, visibly willing to trust him, based above all on dialogue. The sense of justice, love of truth, honesty is very strong in this child.

His eccentricity and originality, his not always and in any case following the current, his innate sociability lead him to establish friendships only with kindred spirits; otherwise he has no problem being alone because he is always interested in a thousand interests. His diplomatic character is revealed from an early age, in fact he rarely enters an open collision course with his parents. Apparently he is docile, he never says an open no, he does not put on faces, but with cunning and skill he manages to avoid unwelcome tasks and tasks (according to him) that are too onerous.

Even if undisciplined the little Aquarius is endowed with a brilliant intelligence, open, free from conditioning, which allow him to understand things on the fly, he gives an excellent ability to express himself and to assert his ideas; you parents have the task of stimulating him as much as possible but also the task of helping him to be more constant and methodical. Also remember to avoid fixed patterns and conventions, not to be authoritarian, but to aim for an open and constructive dialogue, because with him it only takes root that he is authentic and sincere.


Aquarius and the 12 Ascendants

The ascendant can greatly affect the way of being and behaviors of your little Aquarius. Here are the 12 astrological combinations.

From an astrological point of view, how does your little Aquarius work with the zodiac sign of mom and dad? Find out now.

Every mother-to-be wants the creature she carries within herself to be different and special in her own way. The mother of a child who will be born illuminated by the sparkling constellation of Aquarius knows that her little one's artistic temperament is second to none.

The unborn child loved visiting museums with their mother. When the woman remained open-mouthed in front of paintings and sculptures, the child felt a strange sensation, like a warm porthole right in the center of the tummy and his lips parted as if looking for the most appropriate words to describe an inexplicable wonder.

The womb was for him the laboratory of a Renaissance painter. Every detail aroused amazement in the child and at the same time the desire to leave a personal imprint on it.

The rippling walls of that peaceful shell were reassuring, but very unoriginal. After nearly nine months spent surrounded by the same nuances, he decided it was time to express his inspiration.

In the crystalline fluid that enveloped him, slight iridescent dust danced like fireflies on a summer evening. The child stretched out his small hands like a confident prayer, letting them rest on his palms, then applied them around him, making them settle on the walls of his small house like butterflies on multicolored flowers. He was very pleased with the result: now his nest sparkled with a thousand golden eyes.

Only that strange rope stretched like a suspension bridge, just where he felt a warm porthole open when the paintings made his mother shiver, still left him perplexed. It was malleable like clay: the little artist thus began to create strange sculptures that he modified according to his mood: rounded, completely resembling wide open corollas when he felt happy or enveloped like coils of a snake the rare times that irritation drew on the his face a shadow of a frown.

Sometimes he heard his mother describe the world that awaited him, from the bedroom to the layette, declined in all the colors that an expert painter's palette could contain, with the exception of blue and pink because the mother had preferred not to know if the its rounded belly protected a boy or a girl like a shield.

The little Aquarius, however, was more imaginative than his mother and thought he would obtain an effect as amazing as that of the thousand golden eyes and his artistic sculptures by decorating his room with marvelous arabesques and his embroidered dresses with the help of his tireless imagination: the same that allowed him to curb his impatience to come into the world before the constellation of Aquarius had entered the sign of small artists like him.

TAG:
The characteristics of the Pisces child ❯

The characteristics of the Sagittarius child

Chinese New Year and children: 2022 is the year of the Tiger

How to calculate the ascendant

add a comment of The characteristics of the Aquarius child