The development of the fetus between the 33th and 40th week 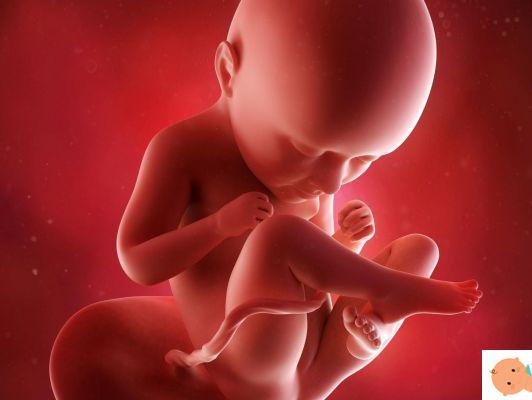 The countdown to birth has begun and the baby is preparing for "real" life. It is a bit tight in the baby bump now and can barely turn around.

It swallows up to 3 liters of amniotic fluid every day, training the stomach, intestines and bladder in this way. He often sucks his thumb and stompes vigorously, so that his skin is massaged by the uterine wall; it also often opens the eyelids. Watch the video pregnancy 33-36 weeks


At the end of the ninth month, the baby measures about 46 centimeters and weighs between 2500 and 3000 grams.

In order to protect itself from the temperature variations it will face after birth, the baby needs a real layer of fat, which is created in the last few weeks.


All organs are ready to function and the foundations of the brain components have also been laid: over 100 million brain cells are waiting to be adequately "fed". This is largely due to the experiences the baby will have after birth. Memory, on the other hand, already works in the womb: scientists have discovered that the fetus, in the 37th week of pregnancy, is able to remember a sequence of sounds for at least 24 hours. Watch the video pregnancy 37-40 weeks

After 40 weeks the baby leaves his nest. Now he can put into practice what he trained for: he has the joy of hearing his mother's now familiar voice, drinks her milk and sits in her arms.

Read what happens in the other weeks of pregnancy


TAG:
The speech development of the child from 1 month to 3 years ❯