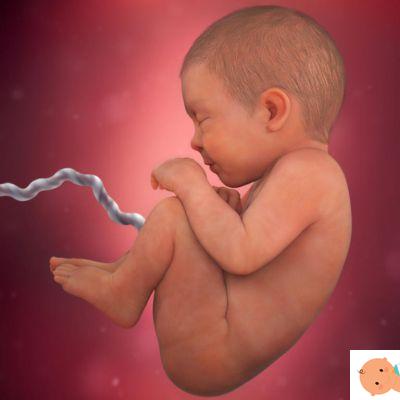 A new life is born from the union of the seminal fluid and the ovum. At this zero hour the fertilized nucleus measures just 0,12 millimeters. Yet in its genetic map it is already established whether it will be a girl or a boy, if it will have the brown eyes of the mother or the straight or curly hair. Conception is a truly extraordinary, almost miraculous event: a new life will grow in the womb, where it will stay for about 40 weeks, growing and developing week after week. Here is a guide to follow the development of the fetus in 40 settimane of pregnancy.

The fetus between the 1st and 4th week of pregnancy

After four hours the embryo in the woman's body begins to divide into two perfectly identical cells. From this moment on, the division continues and the cells divide continuously.

The almost spherical cell cluster takes five days to descend from the tubes to the uterus, then begins to nestle in the uterine mucosa. Right now it's about the size of a pinhead. A few days later, a pregnancy test is already able to detect the state of 'expectation'.

Medicine calculates the times differently than in reality: it is said that the baby is four weeks old, even if the fertilization took place 14 days earlier. The calculation starts from the first day of the last menstruation.

Calculate the expected date of delivery

The pregnancy lasts about 40 weeks and the calculation is made starting from the last menstruation. The gynecologist will use a tool called ruler to calculate the estimated date of delivery, but you can also use the handy online tool for calculating PLR.

The fetus between the 5th and 8th week of pregnancy

The baby's blood vessels are connected to the mother's blood circulation. Gradually it becomes possible for the expectant mother to recognize that a new life is growing inside her. In the fifth week, the fetus's heart begins to beat and the hands and feet sprout like little shoots. A few days later the baby is already able to move his head.

Movement is important to your baby's development. The sensory experiences he thus accumulates influence his brain development.

In the sixth week the neural tube, which will give life to the brain and spinal cord.

The fetus between the 9th and 12th week of pregnancy

We are in the third month of pregnancy: the cerebral cortex begins to grow and will later become part of the brain.
From the tenth week on, the baby is able to feel the stimuli on his skin and is able to feel agitation, happiness or stress.

Read also: When does the embryo become a fetus?

The fetus between the 13th and 16th week of pregnancy

There is still a lot of space in the belly and the baby is free to move: during his movements he only slightly touches the uterine walls but some mothers can perceive the first movements already around the 15th week. The eyelids are still closed tightly but the eyeballs begin to move.

The fetus between the 17th and 20th week of pregnancy

The baby is fully formed and just needs to grow and train intensely for life outside the womb. His body becomes covered with a substance called hollow paint which serves to protect her skin.

In these weeks the baby starts to exercise the senses: he sucks his thumb and can often have the hiccup. We can clearly see it! She is able to perceive the sounds that are mainly those produced by the mother's organism, therefore the beating of her heart, the breath, the gurgling of her stomach and of course her voice.

The fetus between the 21th and 24th week of pregnancy

At this point we will do the morphological ultrasound, an important exam that evaluates how the baby is growing, if the organs are all well formed and if we are lucky it could also reveal the sex of the baby or we may be able to see him sucking the baby. thumb. Now he is interested in his own body, he touches himself and every now and then the amniotic fluid goes sideways and he gets hiccups.

The fetus between the 25st and 28th week of pregnancy

I nerves they begin to connect the eyes with the cerebral cortex and it is in this phase that the child opens his eyes for the first time, slightly opening the eyelids. Only 1% of daylight reaches the depth of the baby bump, however the baby is sensitive to light.

The child begins to have less and less space for move, but he can throw some nice kicks or punches that the mother feels clearly and can also begin to keep track of fetal movements during the day.

The fetus between the 29th and 32th week of pregnancy

If the baby were to be born now he would already be able to survive with the help of medical aids. The child becomes more and more awake and reacts to external contacts. He warns when mum gently places her hand on her stomach or when dad talks or caresses her belly. Even he could respond to stimuli with football.

The fetus between the 33th and 40th week of pregnancy

The baby in the belly is now a bit tight and can barely turn around. It swallows up to 3 liters of amniotic fluid every day, thus training the stomach, intestines and bladder. He often opens his eyes, sucks his finger, sleeps when mom moves around during the day, rocking him, and stays awake more often when mom is resting.

TAG:
The development of the fetus between the 17th and 24th week ❯