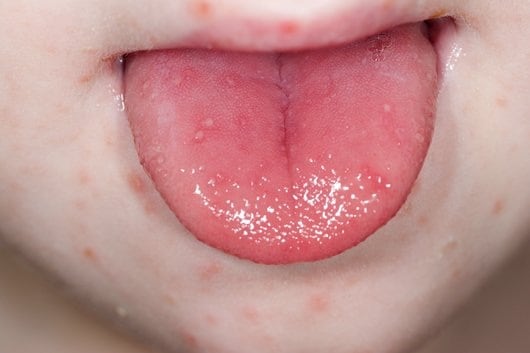 What is it and what are the causes

The "mouth hands feet", also in the variants "hands feet mouth", "hands mouth feet" and "feet hands mouth" is a exanthematous disease of viral origin, usually caused by viruses belonging to the family Coxsackie and, among these, in particular the type A16. "This is why pediatricians call it coxsackiosis" he stresses Piercarlo Salari, family pediatrician and head of the SIPPS Parenting Support Working Group. However, specifying that, to a lesser extent, other viruses such as enterovirus (in particular type A71).

The hand and foot mouth is a disease Very frequently because the responsible virus is transmitted very easily. "In its characteristic manifestations it is of particular interest to the preschool children"says Salari." In older children and adults it can manifest itself in a very attenuated way and it is generally difficult to understand that it is just mouth hands feet. "

It can appear throughout the year, but it usually is more frequent between late summer and autumn, in conjunction with the reopening of kindergartens and schools.

The disease usually starts three to six days after contracting the virus.

Generally the first symptoms are:

Later, they appear in the mouth area and in some cases also on the tongue red spots, which quickly turn into small painful ulcerations. Within 48 hours therash it extends to the hands, feet and sometimes even to the genital area and buttocks. The rash is characterized by red patches that can turn into clear blisters.

"Specks and vesicles can be very variable from one subject to another," says Salari. "In some cases these are almost imperceptible shades, in others very noticeable spots. As the spots tend to fade there may also be peeling of the skin, which is part of the normal course of the disease."

Hand foot mouth disease in children: photos to recognize it

It is a typical childhood disease that is rather trivial, which passes by itself without the need for treatment. The skin manifestation affects the hands, feet and mouth, with the appearance of ...

How the contagion happens

"The hand and foot mouth is a very contagious disease because the viruses responsible are transmitted very easily. However, it is not automatic that exposure to the virus leads to the disease," says Salari. Recalling that the main ways of contagion are three:

There can rarely be contagion in environments such as swimming pools, if the water is not adequately treated with chlorine.

How long does the mouth, hands and feet last

"The duration of the disease varies from person to person," Salari explains. "On average we can consider that it is necessary one week before all the stains disappear, but remember that it is important to always refer to the child's behavior. There are children who have a lot of discomfort in their mouth, they do not eat, they find it more difficult to recover and therefore have a somewhat longer course, even about ten days. Others after four or five days have already overcome the malaise and resumed normal liveliness ".

Hands mouth feet: when you can go back to school

"In general, when the mouth, hands and feet occurs, it is prudent to take into account a week off. In some cases it will be possible to return to school even after five days, if the child is well and the skin manifestations have passed. On the other hand, if after a week the child still feels tired, unresponsive, in need of rest, the return should not be forced. Better a few more days of rest at home. "Recommend Wages.

Read also: Here's why children who are still sick shouldn't go back to school

The diagnosis is clinical, that is, it is made by the pediatrician by evaluating the child's symptoms and conditions. Some laboratory tests are required only in exceptional cases.

Therapies: how to treat the mouth, hands and feet

"There are no specific therapies. After all, it is a viral disease and there are very few viruses against which we have specific drugs" explains the pediatrician. The disease in general it heals spontaneously within a maximum of seven to ten days.

However, it is possible to intervene with therapies capable of alleviating the symptoms. For example, you can use paracetamol against fever and malaise, or products against canker sores. It is also important to verify that the baby is well hydrated and if he has mouth discomfort, give him a diet based on soft or semi-liquid foods, less irritating for mouth ulcerations. For the same reason, better avoid acidic or spicy foods, like freshly squeezed orange juice.

Can there be complications?

In the vast majority of cases, the hand and foot mouth is a disease that it has no consequences and which heals on its own within a week ten days. Sometimes it might happen dehydration, if the child does not drink enough due to discomfort in the mouth: this is why it is important for parents to check that he drinks adequately.

Serious complications, such as brain infections, are extremely rare (even rarer than can happen with chickenpox or measles, where they are already rare anyway).

Pregnant women should be careful if they are in contact with a baby who has the disease mouth hands feet. Although rare, the infection could in fact involve complications, of varying severity depending on the period of pregnancy.

Contracting the hands, mouth and feet during the first trimester, for example, could carry a risk of miscarriage. In case of infection in pregnancy, this will be followed more carefully and with more assiduous checks, both ultrasound and laboratory, in order to monitor the fetal well-being.

How it is prevented

Given the ease of transmission, it is difficult to completely prevent the appearance of mouth, hand and foot in an environment such as a nursery, kindergarten or primary school. However, there are very important hygiene measures to limit it as much as possible:

Can the hand and foot mouth also affect adults?

It is rarer, but obviously adults in contact with sick children can get sick themselves. Usually the manifestations are milder and nonspecific (sore throat, gastrointestinal disturbances, moderate fever). Adults can also be asymptomatic

Can the hands and feet mouth come back?

Pediatrician Piercarlo Salari replies: "In theory it could occur again, but it is a very rare event, especially with skin manifestations. It is possible that it returns to manifest itself with non-specific symptoms (sore throat, an episode of vomiting or diarrhea) so a precise diagnosis becomes impossible ".

TAG:
The mother has to be away for two days: the first time alone! ❯

add a comment of The disease mouth hands feet