The fashion of eating the placenta after childbirth. Better not 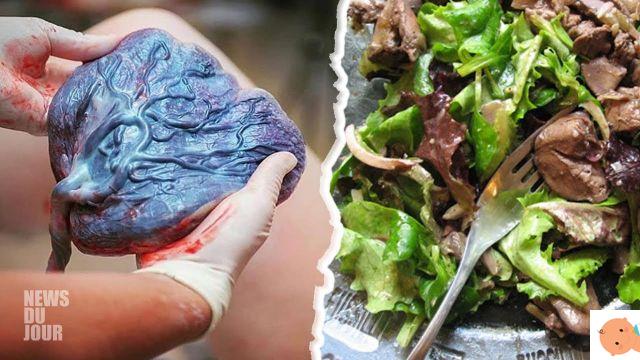 In the United States it is becoming a trend: there are not many yet, but more and more women who, after giving birth, decide to eat their own placenta. But yet, there is no scientific study to support this practice, as the pathologist Rebecca Baergen of the Weill Cornell Medical Center in New York, an expert in placental pathology, points out in an interview with the Scientific American magazine.

Why eat the placenta?

There are several reasons for this somewhat bizarre decision: some women think that the placenta, naturally very rich in iron and other nutrients, can help them regain strength after giving birth. Others who can help with breastfeeding by promoting milk production. Still others that allow to reduce the risk of postpartum depression.

Hence the idea of placenta smoothies or dishes. In the United States there is even a recipe book, and for those who do not want to cook (or eat it raw) the solution is another, theencapsulation. In practice, the placenta is cooked (usually steamed), cut into slices, dried and reduced to powder, to be placed in small capsules. You can do this at home alone or, in some countries, contact individuals or companies that offer this service.

But is it really necessary to eat the placenta?

"Effectively some women report benefiting from having ingested the placenta "comments Rebecca Baergen." They say they feel more energized, that they are very well. But at the moment there is no scientific study that has really documented these positive effects. Probably a lot depends onplacebo effect".


Faced with the skepticism of most, the "convinced" mothers remember that the practice of eating the placenta is very common in the animal kingdom. "It's true - explains Baergen - but animals do a lot of things we don't"According to the pathologist, in animals this behavior has more to do with the need for hide evidence of childbirth just happened to avoid attacks by predators.

And anyway, if you go and see (as the author of the Canadian blog Maman Éprouvette did) what happens in primitive populations or where traditional customs survive and what happened in historical times, it turns out that there is very little evidence of placentophagy. . Indicating that, as a rule, humans do not and never have.

To warn against the practice there is not only the weight of tradition: the placenta, in fact, could be vehicle of bacterial or viral infections and contain residues of waste substances, such as meconium.

Of course, the risks are reduced if the organ is consumed after cooking - but in this case many of the substances that could have positive effects are inactivated - and if your own placenta is ingested and not that of other women (any microorganisms present are probably already circulating in the maternal organism). But they cannot be ruled out entirely.

"In reality, even the risks have never been scientifically documented because there are no specific studies" explains the pathologist. But perhaps this is not a sufficient reason to run them. Especially in the face of the fact that also the benefits are only hypothetical.

Baergen concludes: "If I had just given birth and were worried about postpartum depression, or even were affected by it, I would look for treatments with proven efficacy, such as those proposed by modern medicine, instead of turning to dubious methods".

add a comment of The fashion of eating the placenta after childbirth. Better not