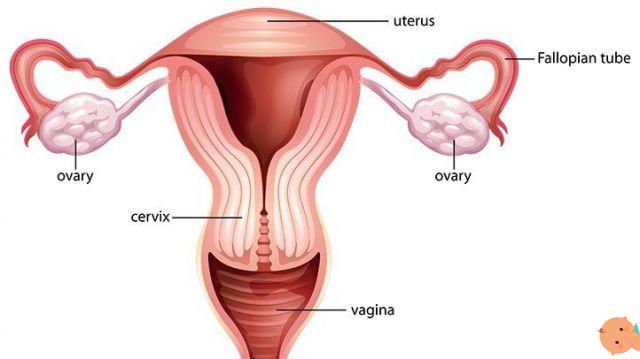 The functions of the reproductive system of the woman

- transports the oocyte to the place where conception will take place, that is the fertilization by a spermatozoon; - It receives and carries the spermatozoa;

- transports the fertilized oocyte to the uterus, where the implantation will take place and the pregnancy will begin;

- produces some sex hormones that contribute to the maintenance of the reproductive cycle.

See also: THE WOMEN'S CYCLE: HOW IT WORKS

In addition to the vulva (external genitalia), the female reproductive system is composed of various internal structures: ovaries, tubes, uterus, cervix and vagina. Let's see in detail how they are made and what they are for.

They are two oval-shaped glands, located on the sides of the uterus. They are placed in contact with the terminal part of the tubes, where the oocyte is received after ovulation.


The ovaries are responsible for the growth and development of oocytes within particular structures called follicles (which burst when the oocyte is mature). Recall that already at the birth of a girl, the ovaries contain all of her oocytes, which will mature one at a time from puberty to menopause.

In addition, the ovaries produce hormones - estrogen and progesterone - involved in the reproductive cycle.

Also called oviducts or salpingi, they are two tubes that connect the inside of the uterus with the space around the ovaries. They vary in width: wider at the ovaries, narrower near the uterus. The final part, near the ovaries, opens like a fan with a series of protuberances called fimbriae, which every month collect the egg.

It is a hollow muscular organ, shaped like an inverted pear, located in the center of the pelvis between the bladder and rectum and, as a rule, about the size of a female hand closed in a fist: during pregnancy, however, it enlarges considerably to contain the fetus in development.

It consists of two parts: the upper one, wider, called the body, and the lower one, narrower and in connection with the vagina, called the cervix.

From the point of view of the anatomical structure, there is a thick muscular wall (the myometrium), which expands during pregnancy and contracts strongly during childbirth, and an internal lining (endometrium) that produces mucus and every month undergoes various changes to prepare to accept a possible embryo.

In particular, it thickens in the first 14 days of the cycle, and then flakes off during menstruation, if no embryo has been implanted.

Also called the cervix, it is the lower part of the uterus, a narrow passage about 3-4 cm long that connects it with the vagina through the internal uterine orifice.

During childbirth it expands enormously, until it reaches a width of about 10 cm, to allow the fetus to pass outwards. In some cases, this muscle structure "does not hold well" (cervical incontinence), leading to a risk of miscarriage or preterm delivery in the second trimester.

After sexual intercourse, spermatozoa accumulate in the cervix, from where they can continue to go up to the uterus for about 3 days.

It is a thin-walled but sturdy muscular channel that connects the vulva to the cervix and through which the fetus passes during delivery. It is also the "chamber" that accommodates the male penis during sexual intercourse. Some glands around its opening secrete a lubricating mucus during sexual arousal to promote mating.

The opening to the outside of the vagina is partially closed by a thin membrane, the hymen, which can rupture during the first sexual intercourse or following intense physical activity.

Sources for this article: Sito WebMd; BBC site; Information material from the Reproductive Medicine Center of the Modena Polyclinic

This is how life is born: how conception takes place

add a comment of The female reproductive system: anatomy of reproduction PHOTO