The first hours of the baby's life 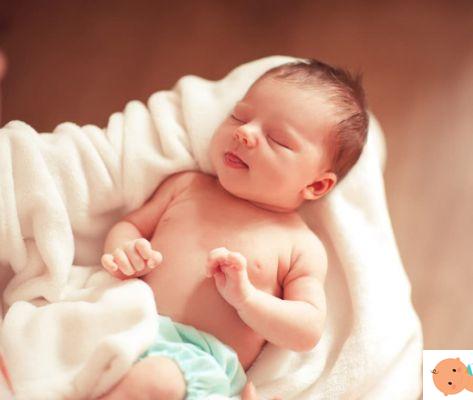 You are well informed about the signs of labor and all stages of childbirth, you are ready to face the highlight of the birth of the baby. But what do you do immediately after giving birth? Is there a practice followed by hospitals?

“Each hospital is organized in its own way, according to the size of the premises, the availability of the midwives and according to the protocols established by the head physician who manages the department”, highlights the gynecologist Rossana. In general, however, in any structure the rules are very similar and include some steps.

As soon as the baby is born, it is immediately put skin to skin in contact with the mother, who can keep it on her womb for a while, while the umbilical cord is severed (in technical terms it is said clampaggio of the umbilical cord).

After a bit of pampering, the newborn is entrusted to the nursing homes, who will bathe and weigh him, and to the neonatologist, who will carry out the first visit to establish the Apgar index (a test that takes into account some parameters to evaluate the vitality and well-being of the child).

The first clothes and the identification bracelet

Finally, the baby is dressed in the clothes that the new father has previously given to the nursing homes and a special bracelet is applied to him, with a numeric code identical to that applied to the mother, so as to avoid confusion. In general, even the father carefully attends to all these operations (worried that they will replace the child !!!).

Meanwhile, the mother expels the placenta ...

In the meantime, the mother remains on the cot in the delivery room, where the afterbirth is awaited, the last phase of childbirth in which the uterus, thanks to a last contraction, expels the placenta. Generally the afterbirth occurs within a quarter of an hour, favored if necessary by gentle abdominal pressures carried out by the obstetrician.

... and they put the points, if needed

After the delivery of the placenta, the gynecologist makes the suture of any spontaneous lacerations or episiotomy, if necessary with a little local anesthesia to relieve the discomfort.

For two hours he stays close to the delivery room

"Once the postpartum procedures are finally finished, the mother is taken to a small room adjacent to the delivery room" explains the gynecologist, "where she will have to stay for about two hours, during which the obstetricians will check the uterine leaks several times to verify that there are no sudden bleeding. In the event of an episiotomy, if a swelling of the wound is noted, a bag with ice is applied locally, which is also very useful for relieving pain ”.

The same procedure is followed even if the caesarean section has been performed, even if the checks continue even after two hours. "The caesarean section is monitored for the entire duration of the hospital stay, since sometimes blood collections are formed in the superficial tissues and under the muscle fascia, while much more rarely the wound becomes infected", Rossana points out. “In any case, every day the plaster is changed and the wound is observed, until the day of discharge; for the removal of the stitches instead it will be necessary to return to the hospital two days later) ".

The baby is attached to the breast

After the checks and the toilet, the baby is brought back to the mother, who can immediately attach it to the breast: a very exciting moment, in which the mother can finally embrace the 'fruit of her labors', but also an important moment, because the early attachment allows an optimal start of breastfeeding, plus the sucking stimulates uterine contractions which favor the scaling of the uterus and avert the risk of bleeding. In these two hours even the new father remains in the room, while friends and relatives have to resign themselves to waiting outside (and thank goodness, because it is a very intimate moment in which the new family must not have external interference!).

Mom and baby go back to the ward

After two hours, mum and baby (and dad) go back to the ward: if rooming in is provided, the baby is immediately placed in the cradle next to the mother, otherwise it is taken to the nursery.

Relatives and friends greet the little one

How does it work for visits? Once again it depends on the organization of the hospital: if in some structures the relatives can enter at set times and get to know the baby closely in the mother's room, in others the child is taken to the nursery during visiting hours and here it is possible see it through a glass window. In any case, it is advisable already before giving birth to ask obstetricians and nursing doctors how it works and to point out at first if you prefer to avoid 'close' contact of the baby with visitors who are a little too intrusive!

Sign up for the mymodernparents.com Baby Guide! Every one / two weeks you will receive a lot of advice via e-mail on the growth of your little baby and on your well-being as a new mother!

TAG:
The first words of the child ❯

add a comment of The first hours of the baby's life