The first library, the first books to give to a newborn 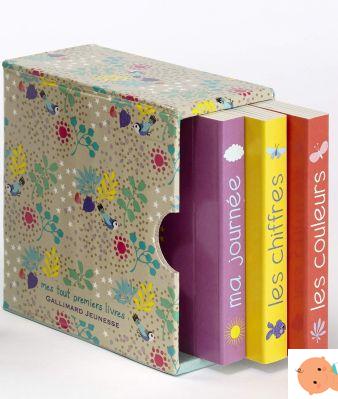 When to give the first book? Now, there are some suitable for children of any age. Indeed, you can begin to make children passionate about the world of reading when they are still well hidden in the belly. Giovanna Malgaroli, member of the National Secretariat of Born to Read, the project promoted by the alliance between pediatricians and librarians to promote reading at an early age, explains which features must have the books suitable for chicks, the ones that will be key to creating their first library.

«Before six months, the baby does not actually have the autonomy necessary to interact with a book: he does not sit, he does not hold his head up. He can, however, begin to discover reading and the book through the intermediation of the adult - says Giovanna Malgaroli-. The first thing you do when you read a book to a child, even when he is still in his stomach, is to give voice and content to the text or images ».

Il sound of voice it is the first bridge, intimate and significant at the same time, that connects the child with his family and then with the world, which he will find both before he is born, still in the belly, and once he is born. «Up to six months, therefore, the best way to approach reading is through listening, right from pregnancy. In this first period of life, children begin to appreciate

they get him used to what is found in books and bring him to the written word, which is the extension of the one heard. In this phase, moreover, listening is also contact through the first games on the changing table or in the arms, which involve the baby also from a physical point of view. Books, therefore, must be repetitive: children so small they love rituals, the repetition increases their sense of security ».

«Always in this phase I am more attracted by shapes, than from color: gods booklets very interesting are those in black and white by Tana Hoban, American photographer who lived in Paris in the 80s. They are both cardboard of a few pages with graphic images, almost as if they were photographic images projected, and then, books with extraordinarily legible photos ».

The discovery of the book-object after 6 months

«After six months the baby begins to interact with the book, how it interacts with any other object - continues the expert -. It is with the intervention of the adult that she discovers that each page is new, different and magical. By giving voice to what is seen in the booklets, new words are often introduced, which are perhaps not part of the commonly used vocabulary. To attract the little one are the photographs and images, the expressions that the child begins to recognize ».

Read also: Why bring a child to the library

How are the very first books to be made?

Read also: Why reading is good for children

8 titles from which to start to form the first library

1. "I'll explain it to you. The first twelve months together" by Federica Grittini and Simona Brunetti, La memoria del Mondo Libreria Editrice.

“This book is actually more for mum and dad than anything else. The authors, who are pedagogist and sociologist of the Milanese consultancy CEMP, have done a very focused work on the first year of the child's life. Inside, activities are proposed, different month by month, which can be done with the child with books, readings and objects that make music. It is a bit like the little one is giving instructions to the adult. "

2. "Cuddles and nursery rhymes. Rhymes, games and tenderness with our little ones" by Celia Carpi Germani and Giulia Baronchelli, from Giunti Kids.

«This book, which is always for parents, contains some indications and a collection of count, rhymes and nursery rhymes that lend themselves to favoring the first contact games on the changing table and then those with the various parts of the body. I would consider it indispensable »says Giovanna Malgaroli.

“These are books to listen to with babies before they are six months old. They are invitations to listen to music and vocal production by children with their parents ».

4. "Look what he does!" by Stefania Manetti, Pasquale Causa and the editorial staff of Quaderni ACP, by Giunti Kids.

“It's a small, square book (12,5cm x 12,5cm). The content is made up of photos of children's faces that are roughly the same age as the little reader. With facial expressions the child learns to recognize emotions. In its simplicity it is extraordinary: on the right there is the photo, on the left there are the sounds, linked to that expression, in different languages. The book therefore also has a multicultural and multi-linguistic value. This book manages to establish a strong connection with the child, because he can be recognized in them ».

As Giovanna Malgaroli explains, this is a very special book: it is translated into symbols and icons. "Childhood neuropsychiatry has shown that the child appropriates symbols much earlier, making the approach to reading much more autonomous and direct". The story "tells" of a duck that goes in search of the right food for her and learns about the tastes of her friends, it is a first way to discover the world.

«This hardcover book has a particular format: the pages increase in size gradually, the first is the smallest, the last the largest. It is the first small story for a small child and a great example of a book that the child will master by reading. Like all Tullet's books, interaction is stimulated ». The reader accompanies a toy car on a journey, which is also tactile, accompanied by onomatopoeias, returning to the strong link between reading and sounds.

"These books are very happy in their simplicity." The theme, that of time, is told in a linear way and the images - which are always found on the right, while the words on the left - represent the world of the child: games, the house, the feet, the body ...

A small hardcover book with rounded corners, which stimulates play and verbalization. "The peculiarity of this book is the graphic sign, which offers a stylistically different interpretation of the more usual picture books for the little ones". The double pages are organized with the image on the right and the text on the left, which not only shows the name of the object depicted, but also expresses the sound or verse.

TAG:
Breakfast is essential for children: it protects against diabetes ❯

add a comment of The first library, the first books to give to a newborn